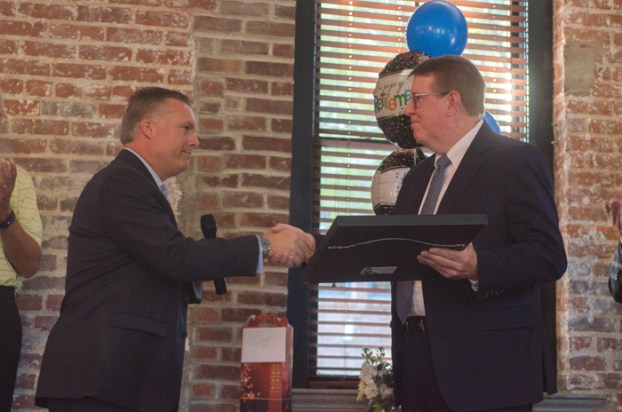 Greg Edds presents a plaque to Rick Eldridge at a party in his honor as he retires from being Executive Director of Rufty Holmes Senior Center on Thursday. Kristi Craven/Salisbury Post

Eldridge heads toward retirement with love, honors, respect in tow

By Mark Wineka
mark.wineka@salisburypost.com
SALISBURY — And they said it wouldn’t last.
The story goes like this: When Rufty-Holmes Senior Center opened 30 years ago with Rick Eldridge as its executive director, a couple of board members had a bet Eldridge wouldn’t last a year.
“Somehow, he lasted a little longer,” Bob Bruce said.
There was Eldridge on Thursday night — 29 years and nine months later — receiving city, county and state proclamations as he heads for retirement June 30.
Mayor Karen Alexander proclaimed Thursday “Rick Eldridge Day” in Salisbury, and on behalf of Gov. Roy Cooper, she presented Eldridge with the Order of the Long Leaf Pine, the state’s highest civilian award.
Rowan County Commissioners Greg Edds, Jim Greene and Craig Pierce gave a proclamation to Eldridge that their board had quietly passed June 5, so as not to spoil the surprise of Thursday night’s party at the Heritage Room.
All of the night’s formal documents and friend after friend talked of Eldridge’s preparedness, innovation, energy, thoroughness, sincerity and unflappable style.
Under Eldridge’s leadership, Rufty-Holmes became the first certified Senior Center of Excellence in North Carolina and the first senior center in the state to be nationally accredited.
Rufty-Holmes, located off South Martin Luther King Jr. Avenue, has now attained that national accreditation four times.
Gayla Woody, retired director of the Centralina Area Agency on Aging, remembers when Rufty-Holmes Senior Center was in its infancy. She thought the young Eldridge would last maybe six months.
Instead, he became one of the best senior center directors in the state, Woody said. He was always creative with his programs and handled the many challenges through the years with grace, finesse and a smile.
“Rick and the Rufty-Holmes Senior Center are something Rowan County can be very, very proud of,” Woody said.
Pierce, the county commissioner, said in all his years in business and on various boards, Eldridge was the one person “who always knows the answer.”
Jim Duncan, who served on the Rufty-Holmes board for 10 years and is a past president, said he has served on boards of probably 25 percent of the local United Way agencies and Eldridge was the best to work with.
Duncan cited Eldridge’s constant energy and ideas.
“Plus, he turned out to be a very good friend of mine,” Duncan said.
Larry Williams, whose wife has been Eldridge’s administrative assistant for 25 years, said Eldridge is sincere and genuine and takes care of everyone coming through the door at the senior center.
“He is what he is,” Williams said.
Bruce headed the succession committee that worked two years before arriving at Eldridge’s replacement, Nan Buehrer of Archbold, Ohio. She takes over the job July 1.
Bruce reviewed some of the senior center’s growth under Eldridge’s leadership. In his first year, the center had an $85,000 budget, and Eldridge was the only full-time employee. Today, the center has eight full-time and 24 part-time staff and a budget exceeding $1 million.
The building itself has doubled in size to 20,000 square feet through three expansions. These additions included conversion of outdoor patio space into an enclosed multipurpose room, a 3,900-square-foot fitness center and an aquatic exercise facility.
An additional parking lot was needed to accommodate all the new users of the center.
That first year, the center served about 300 seniors. In the past fiscal year, the center served 4,797 seniors through various programs.
Eldridge was active on aging issues at the state and local levels. He served as a delegate to the 2005 White House Conference on Aging.
In 2011, Rowan County decided against hiring a new director of senior services after the incumbent retired. Eldridge agreed Rufty-Holmes could take over the Information and Assistance, Nutrition and Title 5 programs, including all eight senior meal sites in the county.
Eldridge’s wife, Susan, told a fib in getting her husband to the surprise gathering Thursday night. Several other members of his family also attended.
“Over the years, I’ve been given way too much credit for the success of the senior center,” Eldridge said. He cited many people who have invested in the center with time and money, and he said the city and county have been among 35 to 40 coalitions “making it all work.”
“My philosophy has always been to stand back and let it happen,” he said.
Eldridge contended his job was made easier because he worked with a mature population he could trust to do the right things. He tried not to have a lot of rules and hoped the center provided the freedom for people to share their talents and skills with others.
Ronnie Smith offered a toast to Eldridge — an actual piece of toast, plus a more serious one with raised glasses. Smith also gave Eldridge two cartons of eggs to go with the toast, though the eggs were actually new golf balls — something Eldridge might be using and losing more of in retirement.
The evening was punctuated with several standing ovations for the retiring executive director.
Susan Eldridge said Rick is a wonderful son, husband and father.
“He’s the best decision I ever made,” she said.
Contact Mark Wineka at 704-797-4263.
You Might Like

By Mark Wineka mark.wineka@salisburypost.com SALISBURY — After two months or so of settling in, staff and board members of Families... read more