Edwards moves up, Lyerly down at NC Amateur 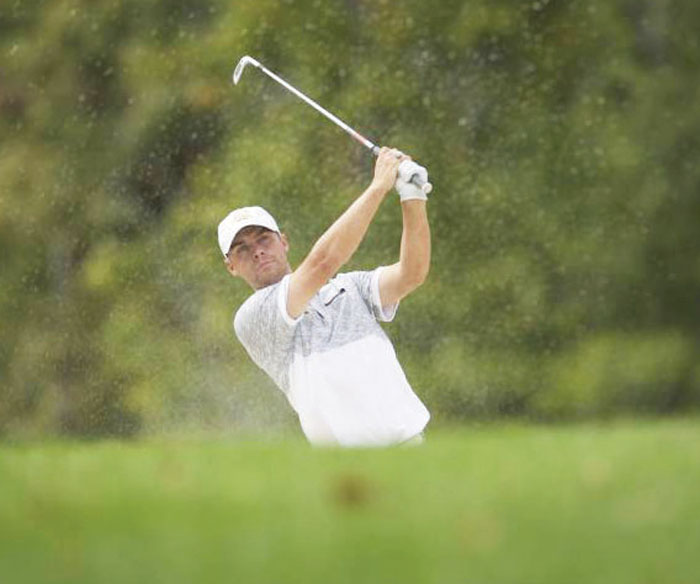 GMU sports information ... Eric Edwards, of Salisbury, shot a 73 on Friday at Davidson, moving up to 20th place in the North Carolina Amateur.

Defending champion Nick Lyerly shot a 77 on Friday and is off the pace at the 57th North Carolina Amateur, but Salisbury’s Eric Edwards is hanging around the top 20 after shooting a 1-over par 73.

Edwards, a Salisbury High School graduate and a senior on the golf team at George Mason University, is tied for 20th place at Davidson’s River Run Country Club. He shot a 74 during Thursday’s first round, giving him a two-day score of 147.

Lyerly, a UNC Greensboro signee and East Rowan graduate, became the youngest ever to win the N.C. Amateur, last year at Governor’s Club in Chapel Hill. His four-round score was 8-under par 280.

After an opening-round 74, Lyerly said Thursday night that it would take a round of at least even par to stay in the running to repeat as champion.

However, Lyerly’s potential 1-over par day was ruined on the final hole of the day. A quadruple 9 on the par-5 18th left Lyerly at 7-over for the tournament and tied for 45th place, making the cut by just two strokes.

Lyerly described the River Run 548-yard 18th as a risk-reward type of par-5 with 200 plus yards of carry over water, with a normal second shot after a good drive.

“But my drive went way left into trees,” said Lyerly. “I punched out a little ways but still had 210 yards to carry the water. I decided to go for it, to try to salvage a par, but mis-hit a 3-wood badly, into the water … I laid out, then went over the green, chipped up and two-putted for a 9.

“I’ve struggled with the driver this week and normally, that’s the best part of my game,” continued Lyerly. “I can blame it mostly on the driver, but I’ve pretty-much hacked it around with every club this week. It hasn’t been pretty.”

Before No. 18, Lyerly had four birdies and five bogeys on the day.

Meanwhile, Edwards shot 1-under par on the front nine on Friday, getting jump-started by an eagle 3 on the par-5, 527-yard second hole. He then birdied the next hole and later, made a birdie on No. 16. Edwards also had five bogeys for his round and at 147, is 3-over for the event.

Brett McLamb, of Coats, N.C., is the two-round leader at 140, including a 3-under 69 on Friday. Only 12 of the 153 golfers that began the tournament are under par after two rounds.

Salisbury’s Michael Childress, a senior at Cannon School in Concord, had another good day, firing a 74, to go along with a 75 on Thursday. He is at 149, tied for 28th place.

Childress, who made an early commitment to the University of Richmond on Thursday, birdied two par-3s during the second round and added another at the 573-yard, par-5 12th hole. He had five bogeys and 10 pars.

Play was suspended by lightning at 6:48 Friday evening, projecting the cut-line at 152, 8-over par.

East Rowan grad and East Carolina sophomore Logan Shuping sits just one off the cut-line with a two-round total of 153. He shot a 77 on Friday, after an opening-round 76.

Shuping had three birdies on Friday, but also scored two double bogeys. On Thursday, Shuping had four birdies and an eagle.

Richards, a rising junior on the N.C. State golf team, rebounded from Thursday’s 80 with a solid 75 yesterday. Richards had three birdies on the day and was actually 1-under 35 on the back nine. He is at 155, tied for 86th.

Lentz, of Rockwell, also shot 80 on Thursday, but bounced back in the second round with a 78. Three double bogeys on Friday kept Lentz from carded a very good score. He sits at 158, tied for 107th.

After 36 holes, the field is cut to the low 60 scores and ties for the final two rounds.

The Carolina Golf Association contributed to this article.