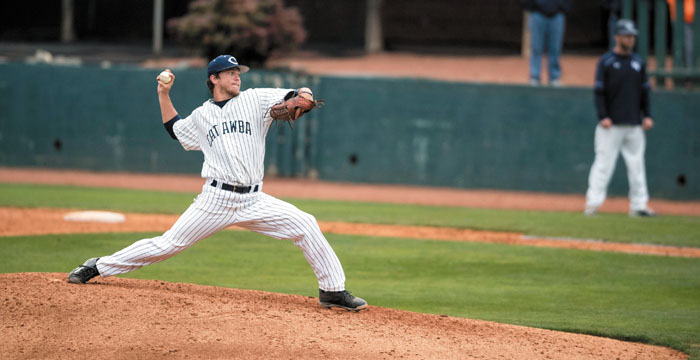 JON C. LAKEY / SALISBURY POST Pitcher Bryan Blanton, shown closing out a game for Catawba in March 2016 against Lincoln Memorial at Newman Park. Blanton was drafted by the New York Yankees on Wednesday and agreed to terms with the team on Thursday.

The New York Yankees closed the deal quickly with Bryan Blanton, in much the same manner that the fireballing reliever put away Catawba College’s opponents.

Drafted in the 21st round on Wednesday, Blanton, who had 14 saves for the Indians as a junior, reached a verbal contract agreement with the Yankees within 24 hours. He flew to Tampa on Thursday night for a physical and to officially sign with the Pinstripers.

Blanton has ordinary physical stature (6 feet, 190 pounds), but his fastball makes that hissing sound that MLB scouts love to hear. The radar guns they hoisted at Newman Park whenever Blanton took the mound for the ninth inning reinforced the audible evidence.

“Bryan throws 91-93 mph consistently and he’ll touch 94 now and then,” Catawba coach Jim Gantt said. “He threw a lot here, and the more he threw, the stronger his arm got. He’s got the velocity they’re looking for.”

Blanton racked up 50 strikeouts in 33 innings as an All-Southeast Region hurler in 2017, but he didn’t just blow the ball past people. His changeup fooled college hitters when he uncoiled it in fastball counts, and his slider can be an effective pitch for him in the pro ranks.

“Blanton could end up being a long reliever,” Gantt said. “He’s got three effective pitches.”

The 90-mph guys don’t usually end up at Division II colleges, but the truth is, Blanton, despite a stellar high school career as a three-sport athlete, almost didn’t end up anywhere.

“I grew up playing whatever sport was in season, and I went to a small school (Albemarle is 1A),” Blanton said. “That gave me a chance to play three sports and to have some success in all three.”

Blanton would be all-conference for the Bulldogs, not only as a pitcher/shortstop in baseball, but as a football quarterback and basketball guard.

“But when I started my senior year at Albemarle, I only had one college offer, and that was from Brevard,” Blanton said. “I really wasn’t interested in going there, and I was thinking I was probably done with baseball.”

But at least one other college coach was interested in Blanton. That was Gantt. Besides coaching Catawba, Gantt coaches the vaunted Rowan County American Legion every summer, and Gantt’s boys of summer had competed against Stanly County teams that included three players who would become difference-making signees by Catawba — Blanton, catcher Zac Almond and lefty pitcher Russ Weiker.

“Blanton was playing shortstop when I first saw him in Legion ball,” Gantt said. “I wasn’t sure if he could hit in college, but it was easy to see that his arm worked pretty good.”

Catawba made Blanton an offer in the fall of 2013. He signed that November. That helped inspire him for his senior baseball season. He was All-State, 6-1 with an 0.40 ERA and 82 strikeouts.

Catawba always brings in a lot of recruits, and in the fall of 2014, as a college freshman, Blanton found himself buried at the bottom of a seemingly endless depth chart.

“I had a pretty rough fall season, struggled a lot, and I was way down the list of pitchers,” Blanton said. “But things changed so quickly that it was hard to believe.”

By the middle of his freshman season, Blanton had emerged as a key guy in the bullpen. At High Point’s Finch Field, he closed a tense regional win against North Greenville. In Catawba’s opening game in the Division  II World Series in Cary, Gantt handed Blanton the ball in the seventh inning and he helped protect a 3-2 lead and a win against Wilmington (Delaware).

Blanton became Catawba’s closer in 2016 and proved to be nearly automatic as a fearless finisher the last two seasons. In his career, he accumulated six wins, 25 saves and 116 strikeouts in 85 innings.

“That tough mentality he developed from being in tight situations in football and basketball games really helped him become a great closer for us,” Gantt said.

Blanton was hopeful, but not certain that he’d be drafted. He was pitching for the Asheboro Copperheads, a team in the Coastal Plain League, a summer wood bat circuit for college players.

On Wednesday, the third day of the MLB draft, Blanton was eating lunch with his Copperheads host family and following the fast-moving draft selections on his phone.

“All of a sudden my name popped up on my phone,” Blanton said. “I hadn’t heard anything from the Yankees, but there it was, ‘Bryan Blanton, Catawba.’ I told my host family, ‘You won’t believe this, but I just got drafted by the Yankees.'”

Yankees area scout Billy Godwin, the former East Carolina head coach, actually wanted to call Blanton before the Yankees picked him, but he was involved in a conversation/negotiation with New York’s 16th-round pick, Mount Olive infielder Ricky Surum when Blanton’s name came up. Godwin called Blanton to confirm his selection as soon as he had a chance.

A lot of thoughts flooded through Blanton’s head after his selection. The MLB dream’s always been there, of course, even growing up in a small town in North Carolina and even going to a Division II school. Being chosen in the draft, getting a shot to play in the minor leagues against guys who were the superstars in their own hometowns, is a necessary step along the way.

“My first phone call after I was drafted was to my dad (Mike),” Blanton said. “He was my baseball coach from T-ball through eighth grade, and he got me started in sports. I told him I’d been drafted by the Yankees and his one-word reaction was, ‘Really?’ He’s excited. I’m excited, but I believe he’s even more excited than I am.”

Most people either love the Yankees or loathe them. Blanton was neutral before the draft.

“I’ve always followed individual players, more than picking a team,” Blanton said. “My favorite player is (Los Angeles Dodgers shortstop) Corey Seager because I got to play against him in Legion ball when Stanly County played Kannapolis.”

Blanton wasn’t interested in a drawn-out negotiation. The Yankees made a reasonable offer. Now he’s ready to get his pro career started.

“But I’ll miss Catawba,” Blanton said. “That school didn’t just make me a better baseball player, it made me a better person. I grew a lot there.”

The Yankees will have a Tampa-based rookie league team in the Gulf Coast League, and they’ll have short-season teams for more advanced draft picks starting up in Pulaski, Va. and Staten Island, N.Y. (New York-Penn League). Staten Island is A ball, but Blanton, with three college seasons under his belt, could be pitching there this summer.

Blanton’s early departure leaves an Aaron Judge-sized hole in Catawba’s bullpen. Catawba has gotten used to having seniors drafted, but losing a pair of talented juniors (Almond signed with the Arizona Diamondbacks) is a new wrinkle for the program to overcome.

“When you lose juniors at a small school, it hurts, because you don’t have the depth,” Gantt said. “But we can’t be anything but happy for Blanton and Almond. This is absolutely a dream for them. They’re great people and they deserve this. Now there’s an opportunity for other guys.”

A story on Almond is upcoming.

Edwards moves up, Lyerly down at NC Amateur