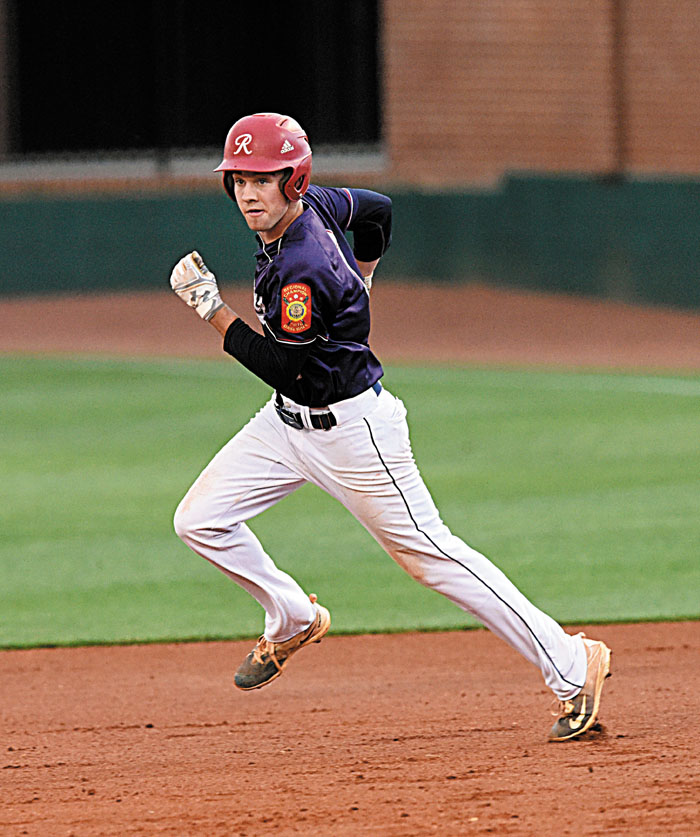 Wayne Hinshaw/for the Salisbury Post ... Rowan’s Brett Graham rounds first base on the way to second for a double during a recent game. Last night, the team won two games in South Carolina to improve to 13-0 this season.

SUMTER, S.C. — The North Carolina-South Carolina Challenge hasn’t been friendly to Rowan County American Legion over the years, but right now everything is going Rowan’s way.

Rowan, 3-6 all-time in the tournament prior to Friday, won the first two games in this year’s Challenge at Riley Park, beating perennial South Carolina powers Chapin-Newberry, the 2015 national champ, as well as host team Sumter.

Rowan is 13-0, the best start to a season for the program since the legendary 2002 team that included future professionals Cal Hayes Jr., Bobby Parnell and Spencer Steedley won its first 15 games.

Rowan won both of Friday’s games by 4-3 scores. The game with Chapin-Newberry went the scheduled seven innings, while weather issues in the top of the sixth officially shortened the victory against Sumter to five innings.

Lefty Brandon White (2-0) did a lot of the heavy lifting in the opener. He held Chapin-Newberry scoreless for three innings as Rowan worked to build a 3-0 lead. John Owen’s sac fly in the first made it 1-0. Chandler Blackwelder produced a run-scoring single in the second, and Hayden Setzer’s RBI single in the third pushed the lead to 3-0.

Chapin-Newberry scored in the fourth and fifth against White to make it 3-2. Will Brown relieved White with two men out in the fifth and got the third out with the bases loaded to preserve the lead.

Lee Poteat, who had a superb game in right field defensively, walked with the bases full in the top of the sixth to boost Rowan’s lead to 4-2.

That run would prove decisive when  Chapin-Newberry scored in the bottom of the sixth against reliever Pearce Wilhelm, with the aid of Rowan miscues, to make it 4-3. Rowan was fortunate that Chapin-Newberry ran into a huge first out in the sixth with a baserunning blunder.

Owen allowed a two-out triple in a suspenseful seventh, but he was able to shut the door, earn his second save and preserve White’s second victory.

Rowan scratched and clawed for two early runs against Sumter, making it 1-0 on  a passed ball and taking a 2-0 lead when Brandon Walton hit into a fielder’s choice.

It was 2-2 when Blackwelder came through with a two-out hit for a 3-2 lead.

Joe Harrison started on the mound for Rowan and lasted into the fourth inning, leaving with  two on and one out. Sumter managed to get the tying run home against reliever Brett Graham, but Graham kept the score at 3-all.

In the top of the fifth, Griffin Myers drew a bases-loaded walk for his 14th RBI of the season to put Rowan back on top, 4-3.

In an eventful bottom of the fifth, with rain falling, Rowan reliever Hayden Setzer secured the biggest out of the game, an inning-ending strikeout with the bases loaded.

Rowan began pummeling the ball in the top of the sixth. Poteat doubled home a run, and Owen tripled in Poteat. Owen scored on a wild pitch before Brandon Walton socked a double.

There was a delay after Walton’s blow, and some slipping and sliding on the mound. With weather and field conditions becoming a factor, umpires stopped the game and declared Rowan the winner.

Unfortunately, the game reverted back to the score (4-3) after the last completed inning, the fifth. Owen’s triple was erased, while Poteat and Walton lost their doubles.

Graham (2-0) was credited with the win. Setzer picked up a save.

Rowan had six hits, with Blackwelder and Chandler Lippard accounting for two each.

Rowan plays its final game in the Challenge today at noon when it takes on Florence, S.C. Olen Stamper is expected to be the starting pitcher for Rowan.

Nine different pitchers have logged wins for Rowan during the season-opening winning streak. … Dating back to last season, Rowan has won 26 of 28 games. … Rowan was 2-1 in the Challenge in 2010, 0-3 in 2012, and 1-2 in 2016. … South Carolina has won the Challenge the last three seasons, but Rowan has staked North Carolina to a 2-0 lead this time. Pitt County and Wilmington are the other N.C. teams participating in the event. SC topped NC, 5-4, in Asheboro last year.