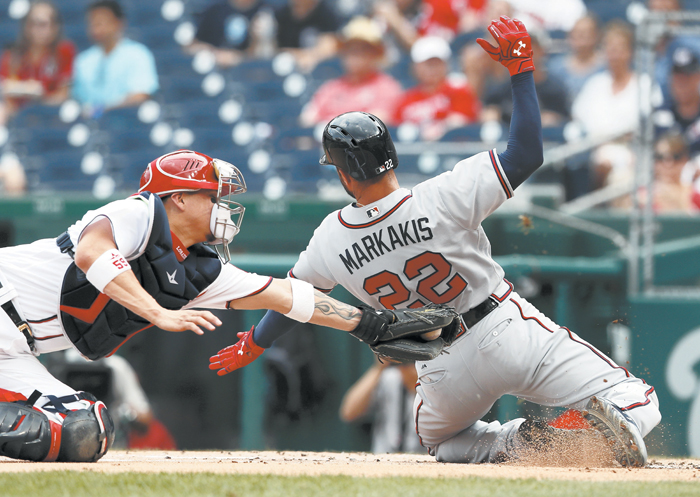 WASHINGTON (AP) — The Atlanta Braves had dropped three straight before this week’s series against the Washington Nationals.

That only makes their rare series victory against the defending NL East champs even sweeter.

“It’s a tough place to win,” manager Brian Snitker said. “It’s a very good team and we were coming off a rough series at home. Guys responded well. We started swinging the bats and the bullpen did a great job. It was a good series for us.”

Brandon Phillips had four hits and three RBIs for the Braves, who had dropped seven consecutive road series against the Nationals and had lost 23 of their last 25 games in Washington before this series. It was Atlanta’s first series victory at Washington since taking two during a three-game set April 4-6, 2014.

Teheran (6-4) matched a season-high with seven innings, allowing six hits and one walk while striking out three against a lineup that did not include resting regulars Anthony Rendon and Matt Wieters.

“Even if I give up a homer or something, I just have to stay focused and execute pitches,” Teheran said. “That’s something I was doing really good — getting ahead in counts and throwing strike one. It was big today.”

Washington lost its second consecutive series and finished 2-5 on its homestand.

“It was a tough homestand,” Washington manager Dusty Baker said. “This is not the kind of homestand you want to exhibit in front of your home fans.”

Atlanta was in control from the start against Washington starter Tanner Roark (6-4), who gave up two runs before he recorded an out and three total in the first inning.

The Braves would add three more in the third, with Nick Markakis scoring from third after Nationals catcher Jose Lobaton’s pickoff attempt of Matt Kemp caught first baseman Ryan Zimmerman off guard and sailed into right field. Kemp was thrown out at third and left the game the following half-inning as a precaution after experiencing hamstring tightness.

After a walk to Matt Adams, Suzuki hit his fourth home run of the season to make it 6-2.

Teheran yielded a two-run homer to Brian Goodwin in the second inning, but otherwise encountered little difficulty. He did not allow a runner past second base after Goodwin’s home run.

“Julio pitched a really good game,” Kemp said. “He made one mistake but other than that he was money.”

Suzuki’s home run snapped an 0-for-19 slump. The catcher added a single in the seventh, securing his first multi-hit game since May 23.

ALL IN THE FAMILY

The Nationals selected OF Darren Baker, the son of manager Dusty Baker, in the 27th round of the baseball draft. Darren Baker already holds a place in baseball lore; as a 3-year-old bat boy during the 2002 World Series, he was swooped up by San Francisco 1B J.T. Snow to avoid injury at home plate.

Braves: The team announced INF Adonis Garcia underwent surgery Monday to repair ligament damage in his left ring finger. Garcia, who is hitting .247 with four homers and 16 RBIs, went on the DL June 7 and is expected to miss about two months.

Nationals: OF Chris Heisey, on the DL since May 24 with a ruptured right biceps, will not join the team on its trip to New York and Miami. “He’s not close, I don’t think,” Baker said. “He’s not as close as he thought he was a couple weeks ago. That injury is a lot more serious than he and we thought it was.”

Nationals: LHP Gio Gonzalez (5-1, 2.91) seeks his third win in his last four starts as Washington begins a four-game series against the Mets.

From jeers to Cheers: Danica ‘had a moment’ with…