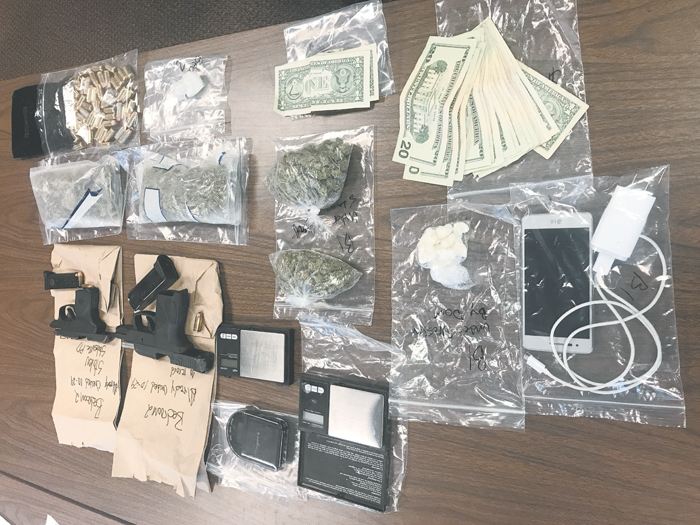 Police found drugs, firearms, cash and drug paraphernalia at the home of Demarco Antoine Oglesby, who was arrested by Salisbury police on drug and firearms charges at 812 Clay St.

SALISBURY — Salisbury police officers on Wednesday executed a “knock and announce” search warrant at 812 S. Clay St. and arrested a man on drug and firearms charges.

In an operation led by the Salisbury Police Department’s Narcotics Unit, Demarco Antoine Oglesby was arrested after he was found in an upstairs bedroom with a large butcher knife beside him.

Officers negotiated his surrender and served the search warrant, according to a Police Department news release.

The warrant was to search the residence for narcotics, weapons and drug paraphernalia.

All officers and detectives involved in the search had body cameras turned on during the search and arrest. The department’s newly implemented threat assessment process was used

The process was put in place in the aftermath of the Ferguson Laurent case, in which an officer serving a no-knock search warrant shot Laurent to death. Last week, the Rowan County District Attorney’s Office announced that no charges would be filed in the Laurent case because the shooting was deemed justifiable.

As a result of the threat assessment process, the news release said, officers were sent to Wiley Lash Head Start building on South Martin Luther King Avenue to notify administrators there of a lockdown order to protect the staff and children. The lockdown lasted only minutes.

In Oglesby’s residence, officers found 41.5 grams of cocaine, 162.9 grams of marijuana, $236 cash, three electronic scales, a fully loaded .380 Ruger and a .40 Taurus handgun, according to authorities. One of the weapons was confirmed stolen from a residential breaking and entering in Statesville earlier this year.

A records search found that Oglesby is wanted in Montgomery County, Pennsylvania, for a probation/parole violation stemming from a 2013 statutory sexual assault charge.

Oglesby also had two failure-to-appear warrants on charges of possession with intent to sell and deliver cocaine and resisting, delaying or obstructing an officer from December in Salisbury.

Oglesby was charged with maintaining a dwelling to sell narcotics; possession of a firearm by a felon; possession of a stolen firearm; trafficking in cocaine; possession with intent to sell and deliver marijuana; sale of narcotics within 1,000 feet of a day care facility; and possession of drug paraphernalia.