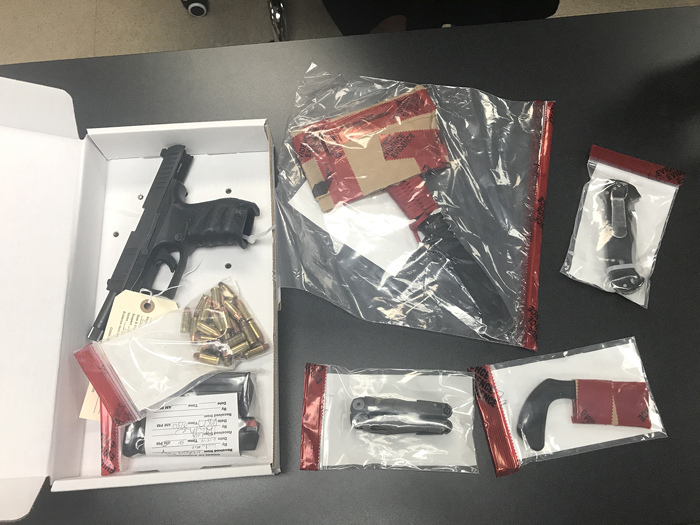 Salisbury Police Department Some of the weapons found on Brian Timothy Allen, found wearing a kilt and heavily armed on a building in downtown Salisbury.

An intoxicated man wearing a kilt and with an assortment of tactical weapons was found on the rooftop of a building on East Innes Street early Thursday morning, according to police.

The subject, according to the police dispatch, was a white man with mutton-chop sideburns who was wearing a kilt.

Police officers could not find the man at Nashville Nights but were called again at 3:16 a.m. when someone at 120 E. Innes St. said a man dressed in black and wearing a kilt had crossed the  building’s awning and disappeared onto the roof.

Officers asked the Salisbury Fire Department to bring a ladder so that they could check the roof. They found Brian Timothy Allen rolling on the roof near the building’s air conditioning unit.

Allen, of the 800 block of North Jackson Street, complied with all police commands, authorities said. When officers searched him, they found a tactical hatchet, several knives and two concealed guns.

Allen told officers that he has a concealed-carry gun permit.

Officers said Allen was cooperative. He was cited for carrying a concealed handgun after consuming alcohol.

Officers took the hatchet and knives as evidence.