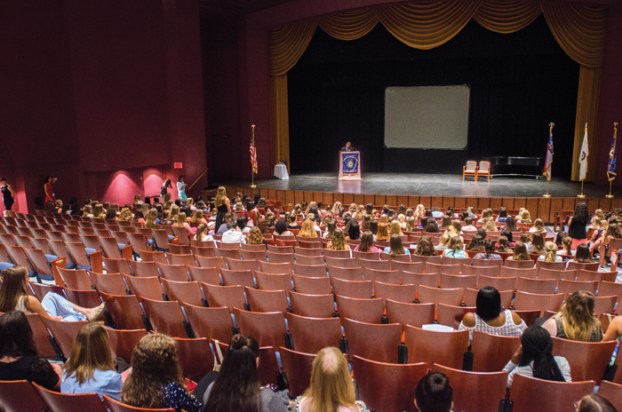 High school girls from across North Carolina flocked to Catawba College this week for Girls State, an annual gathering sponsored by the American Legion Auxiliary. They came to learn about the inner workings of state government and create a simulated state, complete with municipalities, legislatures and a gubernatorial election.

That experience would give them more knowledge of politics and how government operates than most people in the state have, Stein told the group. Stein, of Raleigh, was elected attorney general in November and sworn in Jan. 1.

Stein said he believes students have a responsibility to work to improve their communities.

“I believe each of us has a responsibility to help others beyond our own little worlds,” he said.

That focus on civic responsibility — of people working to help the government fulfill its own responsibilities — is one of the things that makes America a strong nation, he said.

“Making our community a better place to live is all about rolling up your sleeves and working hard,” he said.

And whether students choose to get involved in politics, nonprofit groups, civic organizations or other work, what is important is that they do something, he said.

“I surely hope that you will help make North Carolina as strong and beautiful as possible,” he said.

Stein asked how many students plan to vote, and every hand in the auditorium shot up.

Stein also spoke about what he thinks helps strengthen the country and uphold the Constitution: A free press, the separation of powers, and free and fair elections.

He referenced several recent events as examples, including the testimony of former FBI Director James Comey about the investigation of Russian interference in the U.S. election and the strike-down of President Donald Trump’s proposed travel ban by courts.

“You are learning about government at an unusual time in history,” he said.

While some might get weighed down by headlines and the constant friction and accusations in government, Stein said the ongoing investigations make him optimistic.

“The hearing itself is a victory for our democracy,” he said of Comey’s testimony.

Instead of taking each development as a discouraging reality, Stein said, he sees it as evidence that the government is functioning as it should — that checks and balances are in action.

“Some of the darkest times in history have led to people discovering the light in our institutions,” he said.

As an example, Stein noted the Watergate scandal and how the work of Washington Post reporters Bob Woodward and Carl Bernstein inspired a generation of reporters.

He also encouraged students to commit to learning over a lifetime.

“The only thing that will get in your way is your own inertia,” he said.

Students asked Stein a number of questions before the end of Wednesday’s gathering.

Girls State will run through the end of the week. Next week, Boys State will bring high school boys together for a similar experience.

Before he leaves, Patton’s grandson receives signed painting from the ‘Tank Kids’

By Mark Wineka mark.wineka@salisburypost.com SALISBURY — Members of the 737th Tank Battalion and their families would not allow Pat Waters to leave... read more