Julia Honeycutt repeats as soccer Player of the Year again 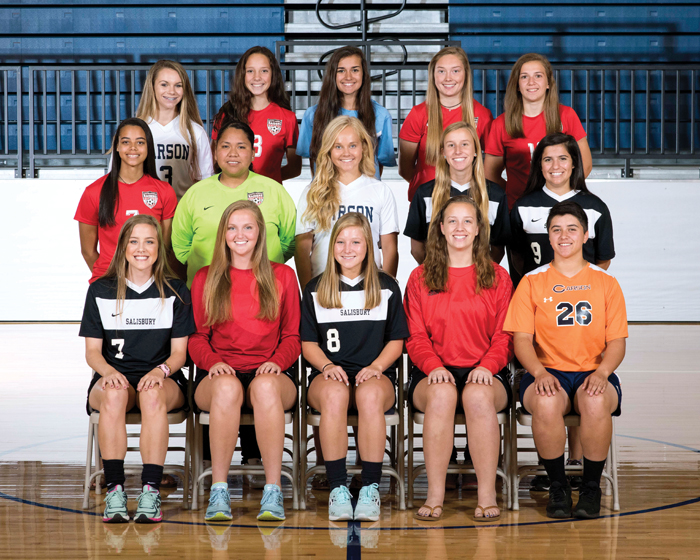 SALISBURY — Somebody reserve a table for one for Julia Honeycutt.

Salisbury’s do-it-all midfielder has distinguished herself as a two-way force on the soccer field and a kind-hearted friend and teammate off it. Now comes an honor no one has ever achieved — her second consecutive Rowan County Player of the Year award.

“I feel very honored,” Honeycutt said during a recent photo shoot at Catawba’s Goodman Gym. “I had gotten this last year, so I wasn’t sure if I was even in the running. It’s very humbling to win it twice.”

It has never been more deserving. As a junior this past spring, Honeycutt scored a team-best 24 goals, added 11 assists and quarterbacked Salisbury to a 17-2-2 season. The Hornets won the Central Carolina Conference title with a 9-0-1 mark, enjoyed a 14-match winning streak and allowed only 13 goals all season.

“We accomplished most of our goals,” she said, echoing the team-first mindset instilled by esteemed coach Matt Parrish and invaluable assistant Taylor Strode. “We wanted to win conference and be undefeated. We wanted to reach the third round of the (2A state) playoffs, but didn’t achieve that goal. That was a little disappointing, but it was an enjoyable year.”

There were no tears when Salisbury’s season ended with a 4-3, second-round loss to CATA on May 13. Honeycutt netted a key goal, steering a ground ball into the right-side corner that tied the score, 2-2, just 18 seconds into the second half.

Parrish called her a “tenacious, fast and smart soccer player,” but Honeycutt’s contribution extended beyond the margins. She was a vocal leader on and off the pitch, someone as creative with the ball as without it, with a flair for improvising. Listen to Salisbury teammate Ceci Cardelle, an avowed fan headed to Duke this autumn:

“She’s an essential player,” said Cardelle, one of eight Salisbury players named to the All-CCC team. “She does everything on the field and does it well. She can play forward, center-back or outside-mid and be the best at each of those positions. She’s also a great teammate and a better friend, someone who lifts people up and never puts them down.”

Honeycutt, an all-state selection this spring, has been playing soccer since her tricycle years and spent the past four off-seasons competing for the Lake Norman Soccer Club. This month she’ll report to the Carolina Rapids of the Elite Clubs National League (ECNL) and play in a U18 program.

“I’m diversified on the field,” she said. “I owe that to Chad Metzler, my coach at Lake Norman. The best thing about playing high school soccer is I get to attack and be part of the offense. But in club ball, I’m an outside back. That’s where my future is.”

It was Honeycutt’s powerful right foot and knack for anticipating plays that attracted recruiters from UNC Charlotte, whose head coach, John Cullen, is the former women’s coach at Catawba. She has verbally committed to play for the 49ers and will accept a scholarship next winter.

“I still need to work on my technical skills,” she noted. “I’ve always relied on fitness, which helps when you play all different positions. I’m doing everything I can to prepare for UNC Charlotte. I love their coaching staff and how they play. That’s what drew me.”

Of course, there’s more to Julia Honeycutt than soccer. Her sunny disposition, infectious smile and caring manner make her someone teammates have enjoyed knowing.

“You should see her before the game,” said defender Nellie Brown, a senior now heading to Appalachian State. “She cracks jokes and does funny dances. People in the stands don’t see that side of her. She’s this bright, bubbly person but she’s also super-goofy.”

“Well, maybe a little,” responded Honeycutt, the proud owner of 57 career goals. “I like to have fun and just be silly sometimes. It gets us hyped for the game.”

Throw it all in the blender and you’ve got a unique performer.

“It’s been amazing to watch her grow as a player,” said Brown, a teammate for the past decade or so. “Julia’s someone you could always count on, and she’s just learning to control her power. Once she does that, she’ll be unstoppable.”