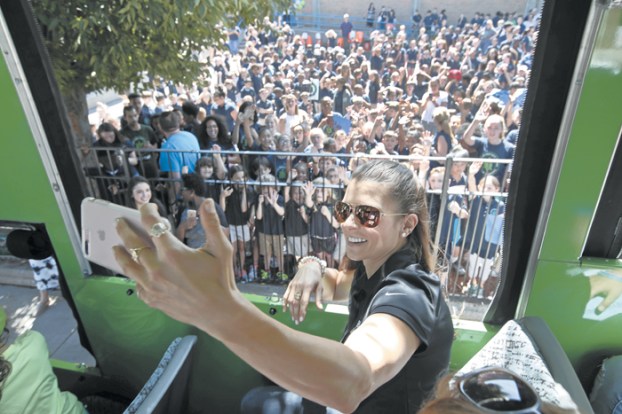 NASCAR driver Danica Patrick takes a selfie from a tour trolley car as students from the Warren-Prescott school give her a send-off rally for a tour of historic sites, Wednesday, June 14, 2017, in Boston. Patrick says she "had a moment" when she lost her temper at a booing fan after qualifying for last week's NASCAR race. (AP Photo/Elise Amendola)

From jeers to Cheers: Danica ‘had a moment’ with fan

BOSTON (AP) — Danica Patrick emerged from some recent fan encounters with a couple of bruises: One resulted in a swollen ring finger after a girl shook her hand too enthusiastically, and another left its mark on her image.

The 35-year-old NASCAR star said Wednesday that she “had a moment” when she cursed out a booing fan after qualifying for last week’s race.

“In a perfect world, I would have never walked over there and I’d have just kept going,” she said during a previously scheduled promotional tour in Boston. “That’s mostly what I do, every single day, if someone boos me, is you just keep walking.

“But every now and again they just catch you in a moment. And I had a moment.”

In a video that went viral after the race in Pocono, Pennsylvania, Patrick stormed over to the fan and said: “I’m a person, too. I have feelings. When you boo me, it hurts my feelings.”

She explained during a stop at the “Cheers” bar to promote next month’s New Hampshire 301 that a fan in Pocono had gone through the security cordon in an attempt to get her autograph.

“I didn’t feel it was right to honor that person for disrespecting the security guard and trying to get past him by signing his stuff,” she said. “So I was put in this awkward situation.”

On Wednesday, Patrick tried to turn the jeers to Cheers.

During a student-guided tour designed to focus on influential women in history, Patrick shook or slapped every hand that was held out to her in Boston, and signed dozens of autographs for the students or other tourists who approached her along the way.

“Days like today, when you hear that you’re an inspiration, that’s the good part,” she said. “That makes the work, which is sometimes frustrating, worth it.”

Starting her day at the Warren-Prescott school in Charlestown, eight grades worth of students chanted “Da-Ni-Ca!” as she arrived, and an a capella group serenaded her. Other students performed a drum routine, and Patrick bobbed her head to the rhythm and took video on her phone.

Then, Patrick boarded a trolley with a handful of students for a tour of the city, from Bunker Hill and Faneuil Hall to the iconic swan boats that paddle through the Public Garden. The tour ended at the bar that inspired the TV show “Cheers.”

Asked what the oldest thing in her hometown of Roscoe, Illinois, is, Patrick joked, “Me, probably, at this point.”

But she said she was eager to continue driving after her contract with Stewart-Hass Racing expires at the end of the year. Although she has been increasingly active off the track — with a food and workout book and a clothing line and even some time in the booth — she says is not ready to retire.

“The job of my life is getting more crowded,” she said. “But the racing always comes first.”

Staff report The third and final day of the Major League Baseball Draft on Wednesday included the selection of two Catawba... read more