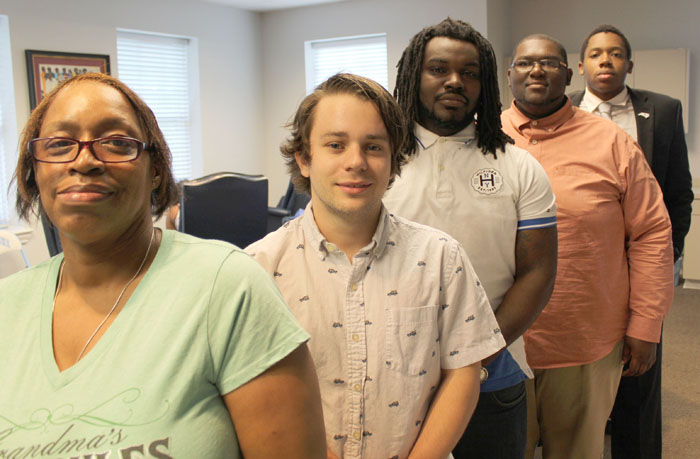 SALISBURY — Livingstone College senior William Jackson II had never flown in an airplane before. But on Sunday, he boarded an international Delta flight to Shanghai, China, where he will spend part of his summer.

Jackson is one of three students in the School of Hospitality Management and Culinary Arts who will spend six weeks at Shanghai Second Polytechnic University. They will be joined by two 2017 Livingstone graduates.

The trip is part of the college’s International Studies and Study Abroad Program, directed by Earl M. Brown Jr. Students in other disciplines have traveled to India and France.

The Shanghai Second Polytechnic University has a renowned culinary arts program, Brown said, that will afford students a once-in-a-lifetime opportunity to become immersed in China’s culture and cuisine.

Hazikiah Johnson of Shelby, a Livingstone junior who wants to own a sports bar one day, said he wants to learn about Chinese cuisine.

Johnson, whose plane ride to Shanghai was also his first, said his mother and grandmother had mixed emotions when he told them he was going to China.

“They were scared for me but happy for me at the same time,” he said.

During a pre-trip orientation meeting at Livingstone on June 8, Brown briefed the students on Chinese customs, traveling abroad and expectations of them not only as Livingstone students but as ambassadors of North Carolina and the United States.

“This experience could open up a world of possibilities for you,” he said. “It’s a chance to share your culture yet respect theirs.”

“Very few people get an opportunity to do this,” said State Alexander, Livingstone’s executive assistant to the president and director of public relations. “You will learn not just how to cook their cuisine, but this journey will provoke your view of the world to change as well as help you better understand the global community.”

Jacob Fisher of Salisbury, a sophomore culinary arts major and an aspiring private chef, said he hopes to fine-tune the culinary basic skills he has already acquired at Livingstone.

Jackson is from Tampa Bay, Florida, and is majoring in hospitality management. His dream is to become a published songwriter, blending his degree with music for a career in Las Vegas. This trip is about food and cooking but also learning how the Chinese people live, their advanced technology, physical activity and religious practices, Jackson said.

“We will do a lot of stuff, and I’m looking forward to being open and accept every challenge presented,” he said.

The five students will be joined by other students from historically black colleges and universities for the program, which is part of the HBCU-China network, Brown said.

Livingstone’s culinary arts students raised their own money by selling prepared meals and through sponsorship letters.

Upon arrival, students will get a quick lesson in Mandarin Chinese, learning basic phrases and greetings. But Janice Hunt of Statesville, a 2017 Livingstone grad on the trip, said she is also relying on a translation app.

Hunt is no stranger to traveling, having been a self-described military brat. She wants to one day work for a five-star restaurant and own a food truck.

Timothy Gray of New Jersey, a 2017 Livingstone graduate on the trip who wants to teach culinary arts, isn’t new to traveling abroad either or with interacting with diverse cultures. He has been to the Bahamas and works at Carowinds in Charlotte, where he meets people from all over the world, he said. He is hoping to learn Chinese chef knife skills during the trip.

The students all agreed that one thing on their must-see list is the Great Wall of China. But Fisher has a specific photo in mind.

Since the soft drink Cheerwine is produced in Salisbury, his hometown, “I want to wear a Cheerwine shirt while holding a Cheerwine drink in front of the Great Wall,” he said.

Students are expected to keep a journal and do a presentation on their trip upon their return.