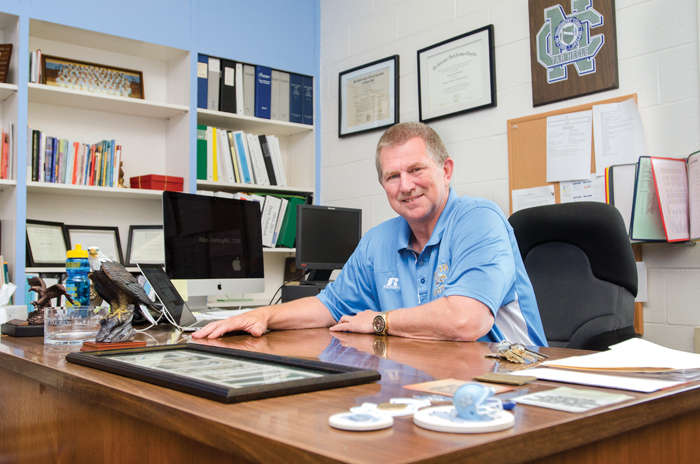 Principal Rick Vanhoy sits at his desk on June 13, 2017 at Erwin Middle School in Salisbury before he retires. Kristi Craven/Salisbury Post

Vanhoy has been at the helm at Erwin for the past four years, ever since he was hired in 2013. But Erwin is more than the place where Vanhoy ends his career: It’s also where he started it.

Vanhoy, 59, is originally from the East Rowan community. So before he was a principal or a teacher, he was a student there.

“I’ve made it full circle,” he said with a chuckle.

Vanhoy graduated from East Rowan High School and pursued a teaching degree at the University of North Carolina at Chapel Hill. When it came time to student-teach, he chose his old middle school — Erwin.

In 1981, the school offered him a job. He remembers that, so soon after his own days as a student, many of his old teachers were still working there.

“Probably the most unusual situation was learning to call them by their first name,” he said.

But it was an exciting opportunity, he said. Some of those teachers were the ones who inspired him to become a teacher himself.

Vanhoy soon moved to East Rowan High, then to South Rowan. He was East Rowan’s assistant principal for a number of years. Returning to his old community was something special.

“To come back and be a principal was a tremendous honor,” he said.

Over the years, he has watched the East Rowan community grow and change. Family demographics have been shifting, and he said the community was heavily affected by the recession. He’s also seen conflict between students grow and change with the rise of social media.

For most of his career, Vanhoy dealt with high school students — not middle-schoolers.

“It’s unlike any group you’re around,” he said of pre-teens.

Students in sixth through eighth grades are undergoing some of the biggest changes of their lives. There’s a lot they have to adjust to, and Vanhoy said he loves to watch how students grow between sixth grade and eighth.

“It’s fun to watch that change,” he said.

But it also can be challenging. When a middle school student gets in trouble, Vanhoy said he can’t deal with them the same way he would a high school student. They’re still children, on their way to being teenagers. That explains a lot of their behavior, he said with a smile.

And that has been the favorite part of his job.

“I just kind of like being around students and the relationships you build,” he said.

Vanhoy said he looks forward to retiring and being home with his family.

“My day never ended at the end of the day,” he said.

But he hopes he’ll be able to stay involved with students in some way, he said.

Daniel Herring, assistant principal at Corriher-Lipe Middle School, has been hired to take the reins at Erwin Middle starting in July.

To his successor, Vanhoy offered this advice: “Be patient; build those relationships.”