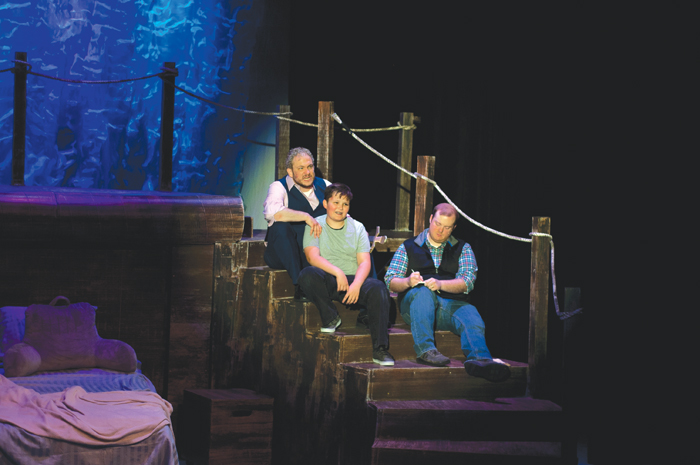 Tommy Foster as Edward, Blake Barrier as Young Will, and Nick Culp as Will. Photo by Caitlin Billings

Big Fish: The Musical is the perfect way to say thanks to the fathers in our community this June. Filled with heart and spectacular love, this musical is based on the 2003 Tim Burton movie Big Fish as well as the 1998 Daniel Wallace novel Big Fish: A Novel of Mythic Proportions. With music and lyrics by Andrew Lippa and a book by John August.

Lee Street theatre artistic director Craig Kolkebeck reflects upon Big Fish: The Musical and what it means to him:

“There’s something truly magical and touching to “Big Fish” that goes far beyond just Edward Bloom’s sense of adventure. Deeper within seems to be a love story between father and son — or is it the realization of love that Will seems to find at the very end of his father’s life? And then the question becomes why Edward Bloom chose and continued to choose such fantastical tales for his son growing up and into his adulthood? Were these stories simply a way to fill a void in his absence of being a father? Perhaps a way of giving himself some importance or reasoning to his young son as to why he is away so much?” says Kolkebeck.

“These certainly are questions for Will whose doubt may be based more on the bitterness of his father’s absence then on a belief that his father is a liar. Regardless, the metamorphosis of “Big Fish” — from book (by John August) to film (by Tim Burton) to musical (by Andrew Lippa) — is a wonderful tale of father and son finding their love for one another at the very end of Edward’s life — a life that, he says, a witch told him how it would end. As Edward sings in his last moments, ‘I know exactly how this ends — it ends the way a story’s ending is supposed to be — a bit insane, a touch of pain, adeptly told yet uncontrolled — it ends with sons, it ends with wives, it ends with knowing when the pavement bends we find our lives.’ Somehow, for me, I have found myself during the rehearsal process thinking over and over again of my own father, now 92 and certainly not an Edward Bloom. With the show performing over Father’s Day weekend, perhaps we’ll all be reminded of the importance of our fathers in our lives.”