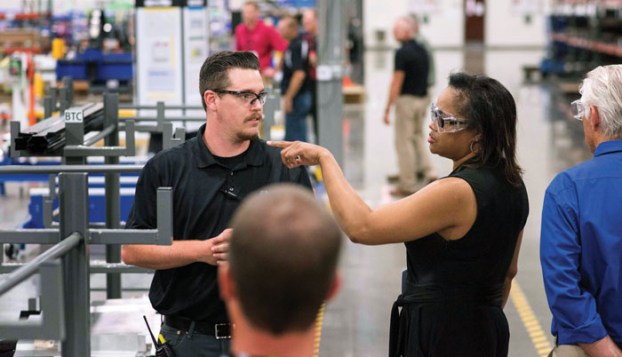 Production manager Ryan Macaulay (left) listens to a question posed by Kathy Sanders during a tour of the Agility Fuel Solutions plant in Salisbury. Sanders is the fleet manager for the city of Charlotte Solid Waste services which uses trucks that employ natural gas as a fuel source. Agility fuel systems, a California based company, hosted a stop on a cross country road rally called Drive NatGas featuring a convoy of vehicles that were fueled by Natural Gas. Jon C. Lakey/Salisbury Post

SALISBURY — Commercial vehicles that run on natural gas haven’t quite caught on yet, according to Shawn Adelsberger, director of operations for Agility Fuel Solutions.

“It’s a very small community right now. We joke internally and say we’re part of a revolution,” Adelsberger said just before he spoke at the Natural Gas Vehicles for America tour stop Wednesday at the local Agility plant.

But Adelsberger anticipates it won’t be much longer before the number of commercial trucks that run on natural gas grows from 2 percent to a double-digit percentage.

“We built this facility for a future capacity, so we have room to grow and support the market as the market starts to transition more to alternative fuels,” Adelsberger said.

On Wednesday, Adelsberger was able to show off that facility — located at 1010 Corporate Center Drive — to representatives from several major municipalities and companies when they stopped by on the second annual Natural Gas Vehicles for America “From Sea to Shining Sea” tour.

The 10-city tour began in Wilmington, California, on June 5 and will end in Washington Friday. The purpose of the rally is to highlight why natural gas is better for vehicles than diesel — the fuel that is most often used to power vehicles.

The main thing that keeps people away, he said, is the upfront investment in the technology.

Greg Edds, chairman of the Rowan County Board of Commissioners, is not fazed, though. He said in his speech at the Wednesday gathering that natural gas is an industry of the future.

Edds said earlier that the pursuit of emerging technologies like natural gas has helped Rowan County bounce back after a difficult economic decade.

“In the year 2000, Rowan County had a poverty rate that was pretty average, around 10 percent. But as the economy faltered, manufacturing jobs began to exit rural America. By 2010, the poverty rate had skyrocketed to 20 percent,” he said.

Edds said that although other communities on the Natural Gas Vehicles of America tour may have been bigger, Rowan County is one that most appreciated the tour being here.

“For us right now, this new natural gas economy is a bright spot,” Edds said, “and a source of hope for so many who have struggled to make their way in this new evolving economy.”