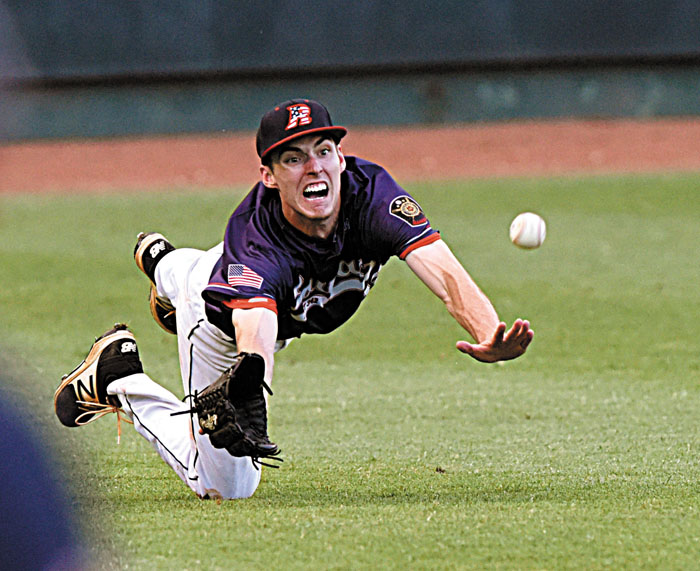 Twenty minutes after reliever Noah Gonzalez delivered the final pitch of Post 342’s abbreviated 14-1 victory against Eastern Randolph, Newman Park went dark. Only a handful of players, coaches and spectators remained inside the stadium when a bright, electrical flash and a “400-amp disconnect” — according to one observer — put a genuine scare into everyone on hand.

“We don’t know if we can play (tonight),” coach Jim Gantt said before sprinting toward the right-field clubhouse. “A transformer just blew out.”

The blackout — which didn’t effect the parking lot light towers or nearby homes — came after Rowan added another brushstroke to its picture-perfect season. RC (10-0) collected 12 hits — six of them for extra bases — and drilled four balls off the outfield wall, all in a seven-inning wipeout.

“The ball was carrying tonight,” infielder Chandler Blackwelder said after contributing a single, double, triple and four RBIs to the cause. “It always carries here, but tonight was special.”

It was. Winning pitcher Luke Barringer, a rising junior at Carson High School, made his first start since last summer and earned his first Legion victory. The tall right-hander wasn’t all sparkle-and-shine, but he allowed only two singles and an unearned run in five innings.

“I only threw two curveballs the whole time,” he said afterward. “The first inning went well (1-2-3), before I kind of went south in the second. (Pitching coach Russ) Weiker came out to talk to me and I made a little fix in my mechanics. That seemed to make all the difference.”

Barringer issued three walks and watched Post 81 (5-3) score its only run on a second-inning error. By then Rowan had mounted a 4-0 lead, thanks to Trevor Atwood’s three-run double to right-center and Brandon Walton’s RBI-groundout against ER’s Ryan Ellington in the bottom of the first.

“That was big for Trevor because he’s been in a slump lately,” said Blackwelder. “It was good to see him get his pitch on that double. He’s been talking about needing to get on a roll.”

His teammates followed with a cascade of offense, which didn’t please Eastern Randolph coach Jerry Kidd.

“I’m a little disappointed,” said Kidd, who’s team plays seven of its next nine games against Northern Division opponents. “We just didn’t hit. Maybe its because we’re coming off a (seven-day) layoff. We didn’t square the ball up at all against (Barringer). It’s almost as if we weren’t seeing it well, weren’t timing it well.”

Eastern Randolph managed only four singles against Barringer, lefty Joe Harrison and Gonzalez. “Barringer was kind of off-and-on,” Gantt said before the lights went out. “He walked some people and had a balk. He doesn’t seem real comfortable with the running game, but that’s probably because he hasn’t pitched a lot in high school. He’s just a 10th-grader.”

Ellington ran into double trouble in the Rowan fourth inning when he surrendered two-base hits to John Owen, Walton and Brett Graham — who lined a run-scoring hit into the right-field corner to make it 9-1. Owen’s sacrifice fly an inning late pushed it to 10-1 before Blackwelder’s two-run double fueled a four-run sixth.

“At least we didn’t have to come from behind tonight,” said Blackwelder, who also tripled off a Catawba supporters sign in right-center field. “It’s good to feel comfortable and relaxed, but you always have to stay on your toes. You can’t lay down.”

NOTES: Blackwelder, Rowan’s starting second-baseman, stole two bases. Teammates Walton, Graham and Griffin Myers each had two hits. … Rowan is scheduled to host a team from Steubenville, Ohio tonight, then participate in the North-South Challenge in Sumpter, S.C. on Friday and Saturday. … Third base coach Seth Graham became a father for the first time last Friday when his wife gave birth to a baby girl. … Rowan must demote or cut two players by June 24 to trim its roster to a Legion-mandated 18.