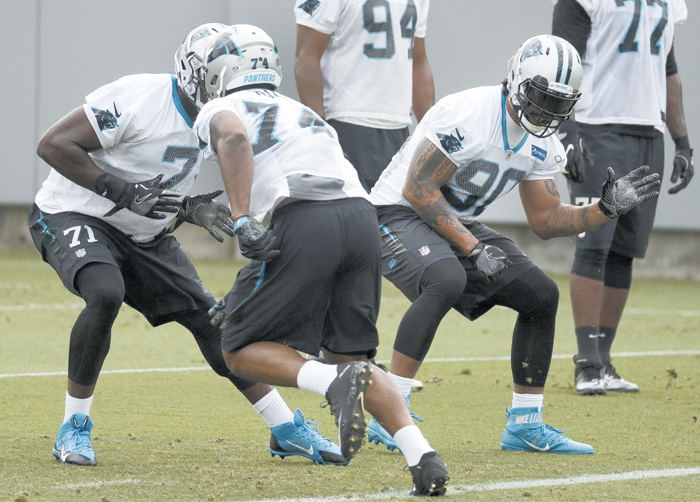 CHARLOTTE (AP) — Cam Newton did not throw as the Panthers opened a mandatory three-day minicamp, while offensive tackle Michael Oher remained absent from practice eight months after suffering a concussion.

Newton, the league’s Most Valuable Player in 2015, is coming off shoulder surgery to repair a partially torn rotator cuff he suffered last November.

Newton was on the field Tuesday wearing a black hoodie under his red practice jersey on a June day where temperatures soared into the 90s. He would holler after big plays, at times running up to his offensive teammates and congratulating them with a flying chest bump.

“It’s fun to watch him stay engaged and be a part of what we’re doing,” Panthers coach Ron Rivera said. “You can see the excitement in his voice as he sees things happen, he sees guys making play, he sees the growth in our wide receiver position and he sees what we’re doing in terms of the running game.”

Rivera said last week Newton would begin throwing on the side at minicamp. However, the team reported on its website Monday night that Rivera had “got ahead of himself by one week.”

Newton did not address reporters on Tuesday.

All-Pro tight end Greg Olsen is not concerned about Newton being ready for the season even though the Panthers are changing some things up on offense.

“I don’t think anyone would say (the injury) is ideal, but I think he will be fine,” Olsen said. “It’s not his first time playing quarterback. Injuries happen. … He’s done everything he’s been allowed to do up until this point.”

Oher was back in Charlotte on Tuesday after a month of not communicating with team officials.

He was expected to meet with team doctors over the next couple of days.  Oher has not practiced with the team since the third week of last season and remains in the NFL’s concussion protocol.

Rivera declined to comment on Oher’s situation other than to say “it’s something we are taking care of.”

He is entering the third year of a three-year, $21 million contract but his future with the team remains up in the air because of the concussion. The Panthers signed free agent Matt Kalil to a five-year, $55 million to play left tackle and drafted Western Michigan’s Taylor Moton to compete with Daryl Williams at right tackle.

Running back Christian McCaffrey, the team’s first-round draft pick this year, was also absent from practice although it had nothing to do with injuries.

McCaffrey isn’t allowed to practice until Thursday when Stanford has completed its final semester of school. Incoming players who attended schools that grade on the quarter system like Stanford are not allowed to compete in team practices and meetings until after those schools complete their semesters, according to league rules.

Panthers running backs coach Jim Skipper has been communicating daily with McCaffrey via video conferencing to help him with installation of the offense.

Rivera said it has been “very tough” not having McCaffrey out at practice during OTAs and now minicamp because they see him as an integral part of the offense.

“Hopefully we will get that opportunity when he does arrive to see exactly where he fits,” Rivera said.

One player who was back on the field for Carolina is Julius Peppers, the 37-year-old defensive end who has returned to play for the team that drafted him back in 2001. The Panthers held Peppers out of a portion of OTAs because of soreness.

Peppers attended all of the team meetings during OTAs, but Rivera said “it’s good having him out here on the field.”