Before he leaves, Patton’s grandson receives signed painting from the ‘Tank Kids’ 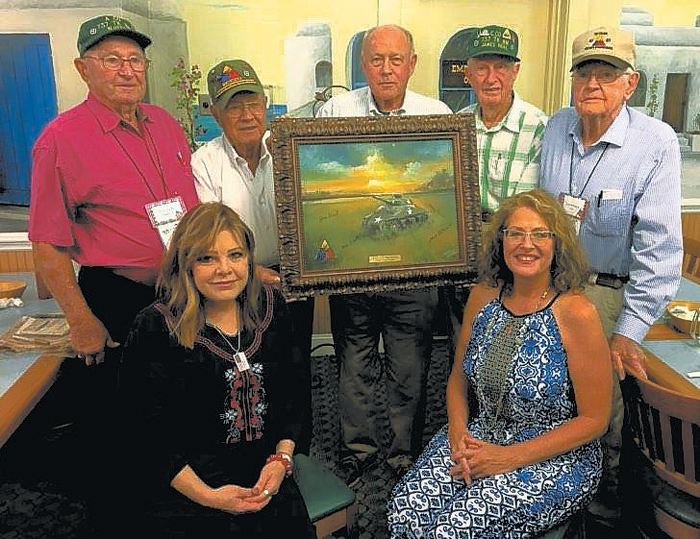 Salisbury artist Connie Loflin Peninger, lower left, painted a Sherman tank, the kind men of the 737th Tank Battalion charged into Germany with as part of Gen. George S. Patton's Third Army. Pat Waters, one of Patton's grandsons, is standing in the center behind the painting, which he received as a gift from the tank battalion's reunion. Signing the painting, from left, were tank battalion members Bob Kluttz, Manny Perez, (Waters), Jim Deal and Jack Pritchett. Melissa Waller, lower right, organized the battalion's 70th reunion, held this past weekend in Rowan County. Submitted photo

SALISBURY — Members of the 737th Tank Battalion and their families would not allow Pat Waters to leave this past weekend without a gift.

And it was a special one — a painting of a Sherman tank done by Salisbury artist Connie Loflin Peninger.

The Army’s 737th Tank Battalion was part of Gen. George S. Patton’s “Spearheaders,” and the battalion drove these Shermans through Europe on its way into Germany and an eventual Allied victory during World War II.

Waters, a grandson of Patton, attended the 70th reunion of the battalion this past weekend in Rowan County.

The four members of the tank battalion who were able to attend included Jim Deal and Bob Kluttz, both of Rowan County; Jack Pritchett of northern Alabama; and Manny Perez of Illinois, near Chicago.

All of these men — sometimes referred to as the “Tank Kids” — are now in their 90s. Many family members joined in the reunion activities with them.

Waters, 76, spoke at a kickoff dinner Thursday night at Faith American Legion Post 327, toured with the reunion participants at the Price of Freedom Museum on Friday morning, went to Richard’s Coffeeshop in Mooresville with his fellow veterans Saturday morning and had a farewell dinner Saturday night at the Blue Bay restaurant on East Innes Street.

Deal, Kluttz, Pritchett and Perez signed the painting given to Waters. Peninger donated the work.

“I’ve been given a lot of things over the years,” Waters said, “but never a painting. This is just amazing.”

Waters lives in Mount Pleasant, South Carolina. He knew his famous grandfather only briefly. Patton stayed 15 days at the Waters’ family house in Washington during the summer of 1945, not long after the country was celebrating victories in Europe and Japan.

Waters was not quite 5 then, but Patton still made quite an impression, memories that Waters shared during his visit.

Melissa Waller, a daughter of Deal, coordinated this year’s reunion and the five previous ones, all based in Salisbury. She said 61 people attended the dinner Saturday night.

“After a night of socializing, we all parted ways Sunday morning from the Hampton Inn in Salisbury,” Waller said.

She said next year’s 71st reunion will be held in Alabama with Pritchett’s family as the hosts.

“The past six years of hosting in Salisbury has been wonderful, and passing the baton is bittersweet,” Waller said.