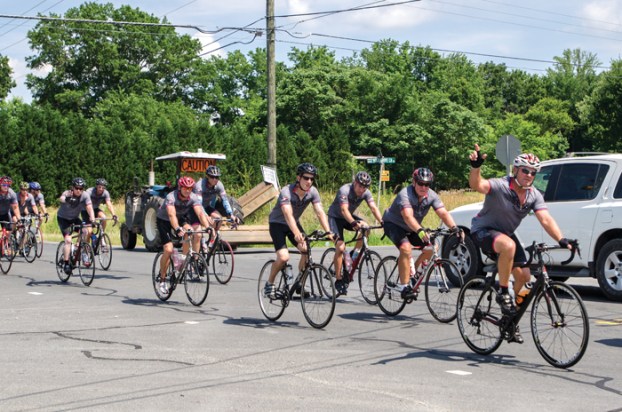 Laurels to brotherhood, in more ways than one. This week, firefighters, law enforcement officers and first responders from the Carolinas and Florida banded together for the sixth annual Carolina Brotherhood ride. The weeklong cycling journey honors fallen comrades and raises awareness of what the Carolina Brotherhood does year-round — provide emotional and financial support for the families of officers and firefighters who lost their lives in the line of duty. It’s inspiring to see these public servants maintain the bonds of brotherhood. Our entire society could use more of that — supporting each other in the brotherhood of man, sharing mutual respect and support, all in service of the common good.

Dart to the devastating effects of drinking and driving. A Salisbury woman lies in a Winston-Salem hospital, critically injured in a Monday morning crash that involved what police say was a drunk driver. Kendra Whitaker’s life will never be the same, and neither should the other driver’s life, if the charge is accurate. Every day, 28 people in this country die in an alcohol-related vehicle crash, says the National Highway Traffic Safety Board. That’s one person every 53 minutes. More than 10,000 people died in alcohol-related crashes in 2015. Those 10,000 people could still be alive. — and Kendra Whitaker could be walking around and laughing — if not for reckless people who drink to excess and somehow think they’re OK to drive.

Laurels to the letter of apology Edgar Maddison Welch wrote to a judge as the young Salisbury man comes to grips with his actions at a Washington, D.C., pizzeria on Dec. 4. Spurred by politically motivated internet fabrications, Welch burst into the restaurant with an AR-15 and revolver to rescue children he believed were caught up in a sex ring run by Democrats. Someone could have been killed when he shot through a storage closet door; fortunately, frightened patrons and employees got out of the way and no one was hurt. Welch believed the end justified the means. Instead, he made a national spectacle of himself, pained his family  and could face up to 4 and a half years in prison. “It was never my intention to harm or frighten innocent lives,” Welch wrote, “but I realize now just how foolish and reckless my decision was.” His guilty plea and punishment should send a message to others tempted to act on bizarre online rumors and email forwards. Don’t get sucked in.

How to make apprenticeships work

Bloomberg View The former host of “The Apprentice” may have finally found a government program suitable to his talents. As... read more