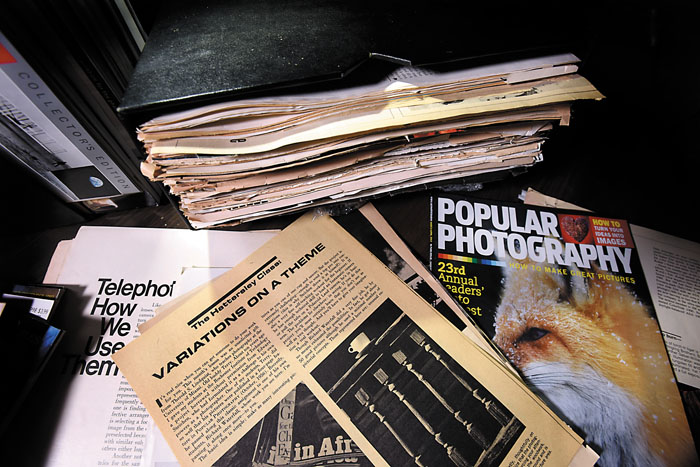 I still have the collection of Popular Photography Magazine articles that I kept years ago. The magazine on the right with the fox photo on the cover is the March-April, 2017 issue that is the final issue of the 80 year old magaznie. photo by Wayne Hinshaw, for the Salisbury Post

Growing up in Randleman, I devoted most of my free time to playing sports.

As a high school sophomore, I received a career-ending knee injury before a career had begun. After the football injury, for which there was no repair surgery at the time, I turned to photography with the same intensity that I had devoted to sports.

There was a jewelry store owner in Randleman who used his 4×5 film camera to make photos at weddings and wedding anniversaries in town. I often stopped by his jewelry store to pump him for photography knowledge.

I discovered there was a wealth of photo information being published monthly in Modern Photography and Popular Photography magazines. I became a subscriber and began absorbing a monthly dose of photo news. I very well might not have become a photographer today without these magazines. I cut my photo “baby teeth” on the articles about film development, what equipment was good and what was not, learning the “hows” and whys” of photography.

I clipped  articles and created a file that I still have today despite the outdated, now mostly useless, information that is buried in the files. I got to see the photos by such greats at Edward Weston, Ansel Adams, Richard Avedon and so many others whom I idolized. I learned  from the magazines how to “push process” 35 mm film to get a higher ISO with special developers and chemicals. That is to make black and white film more sensitive to dim, low-level light than it was manufactured to be.

Last month, I got the obituary for Popular Photography magazine. First published in 1937, it died a slow death after 80 years on the newsstand.

The magazine at one time had a circulation of about 1 million. When it died, circulation was about 320,000. The readers were 60 percent male and averaged 49 years old.

Today’s millennials never bought into the magazine, which certainly didn’t help it survive.

The financial health of the magazine depended on the pages and pages of ads from discounter and mail-order retailers. B&H Photo and Adorama, two giant photo businesses in New York, became noticed with their advertising.

Sadly, as the magazine’s revenue and subscribers dropped in numbers, the magazine reduced its staff and cut its content, making it almost nonrecognizable to readers. One print writer stated, “We are clearly still in the ‘destructive’ phase of ‘creative destruction.’”

Knowing Popular Photography was not as strong a publication as it once was, I continued to renew my subscription even though it reduced the page count and quality of articles. It went from printing monthly to publishing eight or nine times a year, then went to only six issues a year just before it stopped publishing in April. The magazine will no longer update its website as well.

I feel a little sad realizing how much these magazines have meant to me.

Modern Photography, Popular Photography, American Photo, Camera 35, U.S. Camera, Nikon World and other  sources of information are gone, but certainly not forgotten by me.

Seven years of community effort lead to opening of…