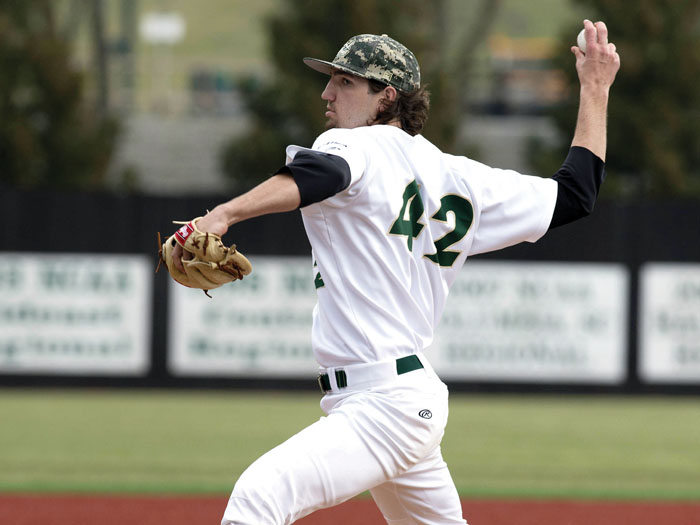 Photo courtesy UNC Charlotte sports information... UNC Charlotte’s Colton Laws, a former star at Carson High School, prepares to deliver against Middle Tennessee State during a game in 2016. Laws, who resides in Faith, was selected on Tuesday in the MLB Draft by the Toronto Blue Jays.

FAITH — Colton Laws is the first Carson High School Cougar to become a draft pick in any sport.

“I guess I can always say I was the first,” the Charlotte 49er said with a laugh. “That’s a pretty good thing to have under your belt.”

Laws, a 2014 Carson graduate, was a seventh-round pick by the Toronto Blue Jays  in the Major League Baseball draft on Tuesday afternoon. He got the news came around 3 p.m. He was the 219th overall pick. He’s listed by the Blue Jays at 6-foot-7 and 215 pounds, although Charlotte has him at 6-8, 223.

A lot of teams expressed pre-draft interest in Laws. He’d filled out stacks of forms for scouts and answered more questions than a game-show contestant. Pre-draft projections had him being selected somewhat later than he actually was, but Laws was confident he would hear his name called at some point on Tuesday, the second day of the draft, when Rounds 3-through-10 were conducted.

“It just depends on how much the area scout liked you,” Laws said. “But I felt pretty sure that someone would take me on Tuesday. I didn’t have any indication that it would be Toronto, but they were one of the teams I’d talked to before the draft. During the seventh round, they called me and said if I was still there when their pick came, then they were taking me.”

Laws was a terrific, two-sport athlete at Carson, accomplishing as much on the basketball court for coach Brian Perry as he did on the baseball field for coach Chris Cauble.

Laws, who was 13-4 in three varsity seasons on the mound for the Cougars, ranks third at Carson in career strikeouts (147), but he also ranks third in career basketball scoring with 1, 261 points.

“You can’t really teach or coach the kind of athleticism Colton has,” Cauble said. “And you can’t teach a kid to be 6-foot-8 and have the sort of long frame he has. Everything was always there.”

Laws always had enormous potential and he shined in regional and national showcase tournaments for the South Charlotte Panthers. His senior year, he was a fall signee with the East Carolina Pirates.

He wasn’t drafted as a high school senior and headed to ECU in the fall of 2014.

Laws’ stay at ECU was brief. He wasn’t in school or getting professional coaching for several months, but he got back on track after enrolling at UNC Charlotte, about 30 miles south of his hometown of Faith.

A sprained wrist detoured Laws, but he made his first impact for Charlotte’s baseball program in 2016, quickly working his way up from February reliever to March starter.  His 4-3 record as a redshirt freshman included flashes of brilliance. There was a game in April in which he shut down a 12th-ranked Rice club on the road, using just his fastball and changeup.

A couple of things happened for Laws between his first and second seasons at Charlotte. New pitching coach Shohn Doty, who had worked with Detroit’s Justin Verlander when they were at Old Dominion University, would prove a difference-maker for Laws. Laws also spent the offseason working the hardest he’d ever worked and got in the best shape he’d ever been in.

“The goal was to be a draft pick,” Laws said. “I put the work in, and, fortunately, that hard work paid off. I went out and had a very consistent season. Not that I was perfect, there are a lot of things I can get better at, but it was a good year.”

His sophomore season was outstanding in every respect. He made all-conference first team. There was a month-long string of 29 2/3 scoreless innings that drew a lot of attention and put him on everyone’s radar. His 1.72 ERA was the best in Conference USA by a wide margin and he went 7-2 for a 35-23 team. His record could’ve been even better, as he posted 13 quality starts in 15 outings.

The rangy right-hander throws his fastball in the 90-92 mph range, although an occasional pitch might reach 93 or even 94.  What makes him so difficult to hit is the movement he has on the ball and the downward angle created by his height. When a 6-foot-8 man strides downhill off the mound, it makes hitters very uncomfortable. Laws’ arsenal also includes a quality changeup and an improving slider.

Laws capped the 2017 season with a conference record-breaking performance in the quarterfinals of the Conference USA Tournament. He struck out 14 while throwing a four-hit shutout.

“My stuff was a little more electric for that game,” Laws said. “That was because I didn’t want our season to end.”

Laws was one of three 49ers drafted on Tuesday, along with second baseman Brett Netzer (third round, Boston) and outfielder T.J. Nichting  (ninth round, Baltimore). It’s the first time Charlotte has had multiple players taken in the first 10 rounds.

Laws has struck out 130 batters in his two-year college career, while walking only 27 in 149 1/3 innings. Under normal circumstances, sophomores at four-year colleges aren’t eligible for the MLB draft, but Laws was eligible because he’s 21.

“We’re all just thrilled for Laws,” Charlotte head coach Loren Hibbs said. “He’s another guy not drafted after high school and developed into seventh round pick. That speaks volumes. We’re all proud of his work ethic and he decided to be really good this year. It’s great to see him get rewarded for it.”

Obviously, Laws would like to sign with the Blue Jays and get his pro career started, but he has negotiating leverage as far as a signing bonus, which should be in six figures. He has options. He still has two years of eligibility left at Charlotte, and he’s a good student.

“I’m thankful, I’m blessed, and all I can do is thank God, my family and my coaches for helping me get to where I am,” Laws said. “I can go play now or I can go back to Charlotte and work to be drafted higher next year. It’s a win-win situation.”

If Laws signs, he most likely would begin his pro career with the Vancouver Canadians of the Northwest League or the Bluefield Blue Jays of the Appalachian League.