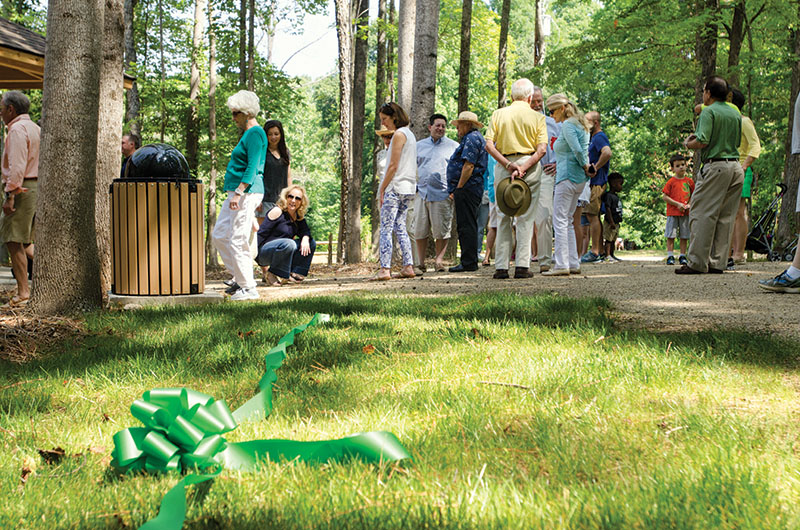 KRISTI CRAVEN/ SALISBURY POST People come to the Grand Opening of the Fred and Alice Stanback Educational Forest and Nature Preserve in Spencer on June 10, 2017.

It all began with snow.

“I really do call it divine intervention,” said former executive director for the LandTrust for Central North Carolina Jason Walser.

Walser was speaking at the opening day celebration for the Fred and Alice Stanback Educational Forest and Nature Preserve, formerly called Spencer Woods.

As Walser told the audience during his remarks Saturday the woods were in danger of being cut down for timber in 2010.

But then, the weekend before the 80-year-old trees were supposed to fall, it snowed.

“Had it not snowed, they would have started cutting on Monday morning at 8,” Walser said.

Seeing an opportunity to save Spencer Woods, many local residents called Walser that Monday morning to see if they could capitalize on the snow delay.

“So,” Walser said, “I called the developer up on Monday at one o’clock. I said, ‘Look, I’m getting all these phone calls. I haven’t had my board meeting yet, I don’t know what I can do. But can I ask you a favor? Can you just give us a couple of days?’ ”

From then on, things fell into place — but not without significant effort from Walser, the LandTrust and the citizens of Spencer.

“I think it truly is a story about community coming together to do something,” Walser said.

Walser went on to say that one of the reasons Spencer residents fought so hard to keep the park is because of the memories that have been made there.

Mayor Jim Gobbel later added a story of his own about Spencer Woods.

Just before he told his story, Gobbel said that he wants the park to be a place that everyone uses.

“A lot of people have already been using it, although it was not officially open. Just come and enjoy the park. It’s for the people here, it’s for people in the entire region. Spread the word because we’re proud of our park,” he said.

One family that has been using the park for months is the Guyaux family. Ashleigh Guyaux’s mother lives just up the street from the park, and she said that it has been the perfect place to bring her two young sons.

“We have been coming out here since they started building it, watching the fish and walking the trails,” Guyaux said. “The nature part, I think that’s really neat for the kids to get to do stuff that we used to do as kids, because most of them just sit on the video game all the time and watch other kids on YouTube go outside and play instead of actually going outside to play themselves.”

The park currently has 53 acres. In it, there are 2.5 miles of trail, two wooden shelters and a small pond with a floating dock.

The park is located at the end of 11th Street in Spencer.