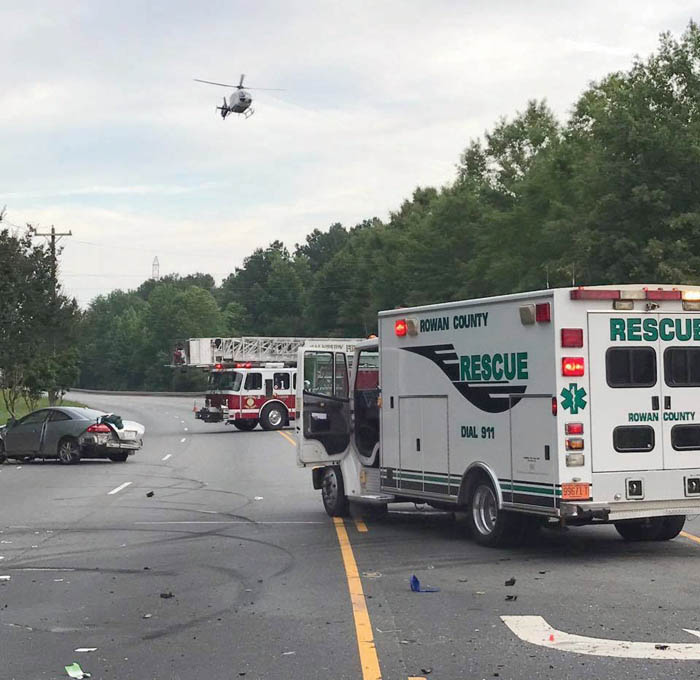 Emergency crews responded to an early morning wreck Monday at 1010 W. Jake Alexander Blvd., near the entrance of Jimmy Clean's Car Wash. Three vehicles were involved in the collision and one person was airlifted to an area hospital. The helicopter landed on the roadway. Salisbury Police are investigating the crash. Photo submitted by Rowan EMS

SALISBURY — A Salisbury woman was airlifted from the scene of a three-vehicle collision early Monday morning after a man now charged with drunk driving crashed into her vehicle at a speed of more than 100 mph.

The crash occurred at 6:27 a.m. at 1010 W. Jake Alexander Blvd. at the entrance to Jimmy Clean’s Car Wash, not far from Brenner Avenue.

The Salisbury Police Department charged Abraham Teya Morris, 43, of Salisbury, with driving while impaired and traveling left of center. Officials say other charges could follow.

Morris, who was driving a 2004 Honda, was traveling north on Jake Alexander Boulevard and crossed the center line in excess of 100 mph. He struck a 2013 passenger car driven by Kendra Whitaker, 35, who was traveling in the opposite direction.

Whitaker was pinned inside the vehicle for about an hour while emergency crews worked to free her. She was taken to Wake Forest Baptist Medical Center in Winston-Salem, where she underwent surgery, said police Capt. Melonie Thompson.

Whitaker’s Toyota was pushed into a 2014 Mazda driven by Laurie Ann Tweed, 42, of Kannapolis. Tweed was treated and released at Carolinas Medical Center NorthEast.

Morris was taken to Novant Health Rowan Medical Center, where he was treated and released.

The engine of Morris’ car was thrown from the vehicle and traveled 90 feet. His car spun several times before hitting Whitaker, Thompson said.

By 6:31 a.m., Salisbury police officers had the road blocked and a helicopter was called. The helicopter landed on West Jake Alexander Boulevard at 6:56 a.m.

Vehicles were detoured around the collision, and traffic was backed up for hours. The road wasn’t cleared until after 9 a.m.

Thompson said Morris told the officer he was on his way to work.