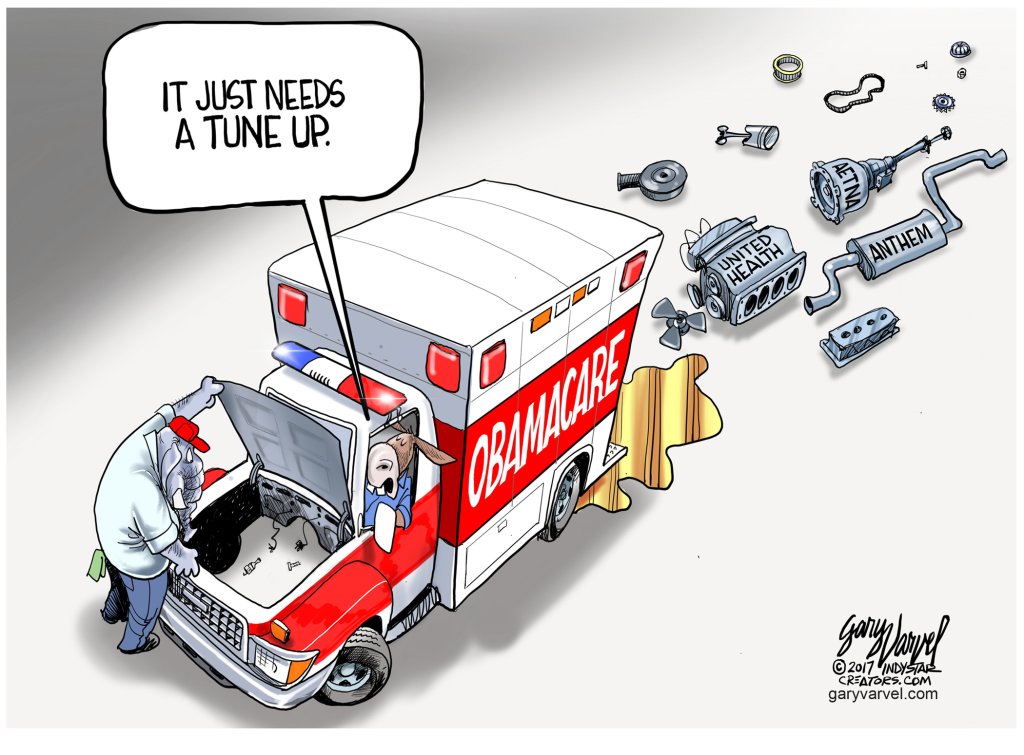 Some considerations for repeal-and-replace drive

Those lamenting the loss of Obamacare too quickly forget then-Speaker Nancy Pelosi’s comment: “We have to pass it before you can read it.” Having read all 2,485 pages of this legislation, I found it quite evident that the bill’s flaws were many. It included numerous duplications, problems with delivery and the kinds of professionals needed to make it function and inadequate funding that would make costs fall on taxpayers and those being insured.

Its major expenditure is the one thing everyone promises not to touch, preexisting conditions.

The health care programs are a pathway to bankruptcy if these are not rethought. The House’s plan for health care reform would not have done what needs to be done because it only dealt with the cost to government, not truly that to the average tax payer.

Nowhere in the U.S. Constitution is there a stipulation that the government must provide health care for our citizens. That is socialism. Despite the morality of the question, health care is not a right but a privilege, unfortunately available most likely to those with money. Christian Scientists and Seven Day Adventists are sample religious mindsets that don’t like health care imposed.

If universal access to care is to be paid for, all persons must participate. The young, who believe they are immortal, don’t want to pay for their share of the universal cost burden. But their behavior and activities often end up needing a lot of care, for which they can’t possibly pay, except by contributing a fair share to the universal pool. Those aging or infirm beyond reasonable recovery have families who want them to live yet aren’t willing or able to shoulder the costs.

Health care is also burdened from a paradigm of delivery dictated by those who are perceived as paying the bill rather than those who have a need. Romney’s Massachusetts plan is a functioning prototype. We are all paying the bills and/or incurring the debt. The cost of the “system” is currently nearly $4 trillion, of which $1 trillion is overhead and profit.

Medicine’s compartmentalization of care into primary, secondary, tertiary and quarternary levels based on specialty access often does a disservice based solely on health care need and doesn’t deal with access.

The internal structure of the health care profession and its system is a major part of the problem. The needed leadership by persons with a broad view of the whole set of problems — i.e. generalists — have not been adequately considered or valued, therefore  specialists rule, though they don’t necessarily talk to other professionals and have run generalists out of hospital care.

North Carolina has seen Brunswick County and Alexander face closure of hospitals leaving people often with miles to go before care is available. Mid-level practitioners with varying degrees of supervision are too often left to fill in these critical areas; however, solving the major problem of access remains. Having money or insurance does not insure access to care. Corporate “health care” has driven the elements of health care out of small towns, very much as Wal-Mart has destroyed small-town businesses. …

As with most things, this nation is eating too high on the hog. We’re probably spending enough on cosmetic surgery, Botox and Viagra than it would cost to take care of many rural counties.

There are 3,145 counties in the United States, each with a health department. Health care needs to be retooled to allow public health departments to become the gateways to care, which would insure some level of services are available to all, with supplements available through cash, government vouchers, insurance on a sliding fee scale, tax credits, etc. to cover costs. Screening exams, well child exams and a lot of things which are not complex can be done, with referrals to the next level available, all without bankrupting the system.

The government shouldn’t think health services can be provided on the cheap, with reimbursements to health care providers well below their cost.

Health Savings Accounts seem hollow promises for those without jobs, but let’s give it a try. …

If the Affordable Care Act is to be replaced, let it be on the basis of access and quality of care, not simply costs.

Dr. Ada Fisher, a retired physician, is the N.C. National Republican Committeewoman and author of “Common Sense Conservative Prescriptions.” Contact her at 704-762-5144 or drfisher@dradamfisher.org.

Cal Thomas: If it walks and talks like a…