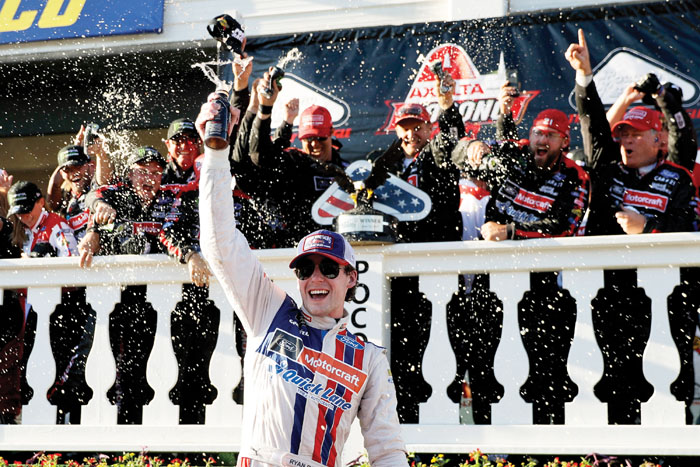 LONG POND, Pa. (AP) — Ryan Blaney was stationed in victory lane with a headset on as a guest pit reporter just the day before at Pocono Raceway. But to get there again, on his own in the No. 21 Ford, he’d have to zip past a pair of hardened NASCAR champions with just 10 laps left.

Kevin Harvick and Kyle Busch may not be ready yet to officially pass the torch to the next generation of drivers. So it’s up to young 20-somethings like Blaney to yank that torch — that checkered flag — and knock ‘em off their perch.

Driving for owners with roots steeped in NASCAR history, Blaney blazed his way down the stretch past Busch, held off a hard-charging Harvick, and won his first career NASCAR Cup race Sunday at the raceway.

That’s career win No. 99 for the Wood Brothers.

No. 1 for Blaney, well, that felt pretty good.

Blaney, a “Star Wars” nut, was tongue tied when he met actress Daisy Ridley in March. An hour or so after confetti fluttered on him in victory lane, he offered an open invitation to Ridley to join the post-race party.

The bash might last as long as a “Star Wars” marathon.

“Maybe she watched the race today,” Blaney said. “She better get on a plane right now. It’ll actually be going on all night, so she’s got plenty of time to get here.”

The 23-year-old Blaney, son of NASCAR driver Dave Blaney, grandson of dirt track star Lou Blaney, won for the first time in 68 career starts and partied again in victory lane. He was a guest reporter for Fox during the Xfinity race.

Blaney interviewed Xfinity winner Brad Keselowski in victory lane on Saturday as part of an all-driver broadcast by Fox. Keselowski finished fifth on Sunday and returned the favor by crashing the broadcast and interviewed Blaney.

“What was going through your mind? You’re in victory lane, man!” Keselowski said.

“I just didn’t want to make a mistake,” Blaney told Keselowski. “That would have been the worst thing we could do.”

He was near flawless over those final 10 laps.

It was a bit of a throwback for the Woods. Blaney’s radio was busted and he had no communication with his team after about the first 40 laps.

“It figures the one race we don’t have radio communication, we end up winning it,” Blaney said. “Maybe we should turn the radio off more often.”

The Wood Brothers have won at least one race in each of the last six decades, but none since Trevor Bayne won the Daytona 500 in 2011.

Blaney is the 18th driver to win a Cup race with the Wood Brothers.

He is also part of a bumper crop of blossoming young talent that his hit NASCAR over the last couple of years. Two of those drivers were in the top 10: rookie Erik Jones was third and Chase Elliott was eighth.

“We can finally add our name to that group,” a beaming Blaney said.

Harvick, the 2014 champion, knows the new generation is coming on strong.

“These young guys have to get into victory lane to get these fans that don’t like me and Kyle,” he said. “The younger crowd has to win, and today Ryan was able to do that, so not only is it good for him, but it’s good for the whole sport.”

Blaney had a brief chat in victory lane with one of his best friends and fellow driver, Darrell Wallace Jr. Wallace finished a lap down in 26th in the first start by a black driver in the Cup series since 2006. He felt ill after the race and needed to go to the medical center. Wallace said he was embarrassed, but fine.

“It was really cool, a really fun day,” Wallace said.

The Wood Brothers share a technical alliance with team owner Roger Penske and “The Captain” would like to add Blaney to his roster, possibly next year.

Next year was a worry for another day.

With the Wood Brothers.

And, in victory lane.

Other items of note at Pocono:

Seven-time NASCAR champion Jimmie Johnson sat on the track to catch his breath following a fiery wreck late in the race. Johnson’s No. 48 Chevrolet was in flames and the cockpit billowed with smoke when his car struck the wall. Johnson was running seventh when he appeared to have an issue with his brakes that shot the car up the track and into the wall.

Last week at Dover, Johnson moved into a tie for sixth on NASCAR’s list with 83 career wins.

“I can only speculate that I got the brakes too hot and when I went to the brakes they just traveled straight to the floor,” Johnson said. “I didn’t even have a pedal to push on. At that point, I threw it in third gear and I was just trying to slow it down.”

Johnson, who had a form of skin cancer cut out of his right shoulder this week, diffused the wreck with humor.

“I just want to let my wife and kids and my mom know that I’m OK and I will go change my underwear and get ready to go home,” he said.

Jamie McMurray appeared to get caught up in the aftermath of Johnson’s wreck and his No. 1 Chevy also smacked the wall and burst into flames. McMurray, who also had brake issues, quickly climbed out of the car.

“I just started spinning and didn’t have any brakes,” he said. “It was really weird that we kind of both had the same thing happen at the same point on the racetrack, but fortunately, we are both OK.”

Dale Earnhardt Jr.’s winless season stretched into Pocono when he was forced out of the race because of mechanical issues. Earnhardt, who swept Pocono in 2015, was already forced to start at the rear of the field. He said the problem in the No. 88 Chevrolet was shifting issues; he tried to go from third to fourth gear but the car went to second.

“We don’t really have an answer to it other than me just having to pay more attention,” he said.

Earnhardt, who will retire at the end of the season, has finished 30th or worse six times this season.