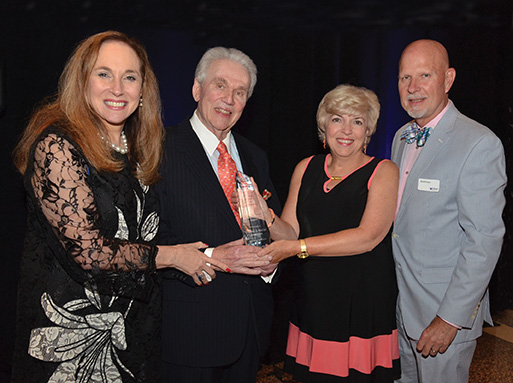 The award is presented annually to individuals in recognition of their exceptional philanthropy.

The Bernheims were honored for their extensive charitable work. With a home in New York and the family home in Salisbury, the Bernheims support both communities.

Rachel Oestreicher Bernheim comes from a family recognized as generous individuals, and the Oestreicher name is well known in Salisbury. Her father, Irvin Oestreicher, owned Oestreicher’s store, which remained a town landmark through the 1960s. He was a charter member of the Rowan Memorial Hospital board of directors from 1936 until his death more than 50 years later. A Novant Health MRI unit is named in his memory.

Rachel’s mother, Bert, contributed to many hospital auxiliary projects, and together, the couple established the Oestreicher Service Awards, which recognize hospital employees.

In Rachel’s own work as founder and chairwoman of the human rights organization Raoul Wallenberg Committee of the United States, she continues to keep alive the memory of Raoul Wallenberg, a humanitarian who saved tens of thousands of Jews during the Holocaust. Rachel’s work has taken her all over the world and earned her the Royal Swedish Order of the Polar Star, the highest award a foreigner can receive in Sweden.

Charles, a senior managing director of Bear, Stearns & Co. of New York before his retirement, also grew up in a charitable family. His parents, Leonard and Elinor Bernheim, instilled in him the importance of giving back and being involved in the community.

Previous recipients of the Wilson L. Smith Philanthropic Award include:

Mooresville man convicted of drug trafficking, to serve over…