‘It was all worth it’ : Area graduates finish high school career 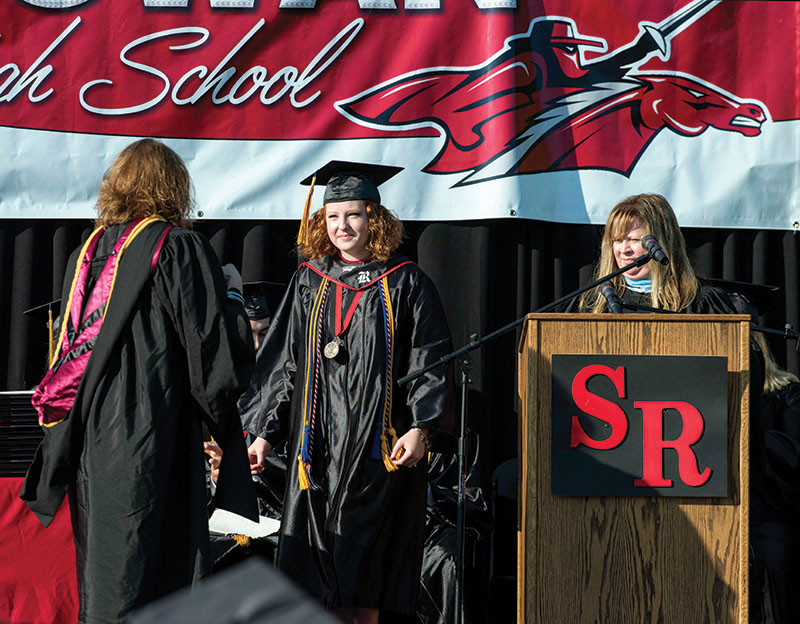 As the 190 graduating seniors walked from the school’s parking lots, down the steps and toward their seats on the football field, the numbers hung over them, reminding them of what this day meant.

6/10/2017. The day that the class of South Rowan High School – and the classes of six other Rowan County high schools – graduated.

“We should all feel successful,” said South Rowan salutatorian Abby Blume. “We should feel pride knowing that we have made it this far.”

Blume was the fourth of seven students to speak at the South Rowan commencement ceremony. In her speech, she elaborated on the definition of success and the way that it is linked to failure.

“Today’s society has made it acceptable to sweep failure under the rug and not really talk about it. But, you see, life forces us to face the mistakes that we have made. How we handle this failure, that is the foreshadow for how we will handle success,” she said.

Blume was introduced to the stage by South Rowan’s valedictorian, Connor Anne Henderson. Henderson called Blume one of her “good friends.”

“While writing this speech, I couldn’t find just one word to describe her. She is intelligent, determined, caring, and always seems to brighten my mood and make me laugh,” Henderson said of Blume.

Blume finished with a 4.96 GPA and will be attending North Carolina State University to study biology.

Henderson finished her high school career with a 5.0 GPA and will be attending Western Carolina University to study art education.

When asked how she achieved such a high GPA, Henderson said it took “a lot of work and a lot of crying. But it was all worth it.”

North Rowan’s ceremony was temporarily disrupted by a medical emergency in the audience. But, after the brief pause, 127 students walked across the stage to receive their diplomas.

East Rowan’s ceremony was ushered in with a poem by Edgar Albert Guest titled “It Couldn’t Be Done,” which was read by principal Julia Erdie.

Students at West Rowan remembered one of their own, Ella Ferguson, who died on Nov. 6 after a fatal car crash. Ferguson would have graduated with the class of 2017.

Carson’s ceremony began with a choral piece, performed by the school’s senior chorus.