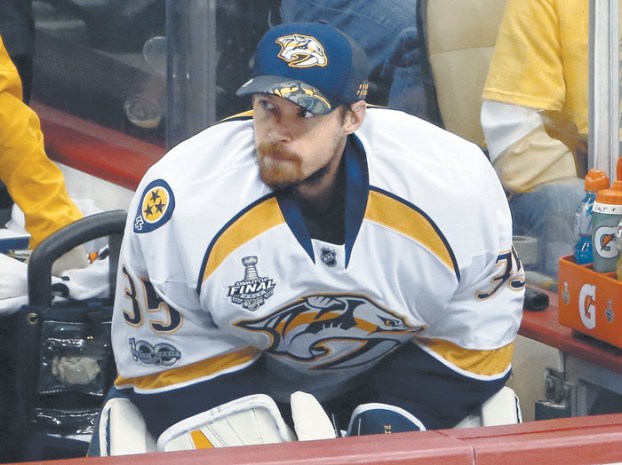 NASHVILLE, Tenn. (AP) — Pekka Rinne is a friendly, polite man off the ice. Slipping the puck past the Nashville Predators goaltender is one of the few ways to anger the 6-foot-5 Finn.

Pucks bouncing past him on the NHL’s biggest stage infuriate him. Rinne chopped his stick against a goalpost not once, but twice  after giving up a fifth and final goal a year ago when Nashville was ousted from the playoffs.

That was just Game 7 in the second round.

Now Rinne goes into the biggest game of his career Sunday night needing yet another home victory to force both the defending champs and the Stanley Cup Final to a deciding seventh game back in Pittsburgh. And Rinne spent the past 40 minutes stewing on the bench as the Penguins finished off a 6-0 rout Thursday night in easily Nashville’s worst playoff loss.

“You have those thoughts that why (is) the puck getting deflected in off our guys or something like that,” Rinne said Saturday. “You try to work so hard that the luck is also on your side. When bounces not going your way, sometimes you question, have second thoughts in your head, but that’s life.”

The goalie so competitive he doesn’t like teammates scoring on him in practice is back in Nashville where he’s been nearly unbeatable over the past two postseasons at 13-1.

Rinne has a 9-1 record this spring with a 1.44 goals-against average and .949 save percentage in Nashville. He’s allowed two or fewer goals in eight of those 10 games and tied Antti Niemi with his 36th playoff win for the most in NHL history by a Finnish-born goaltender.

Yet the goalie and the Predators stand between Pittsburgh and a big chunk of history.

The Penguins are trying to become the first team to win the Stanley Cup in consecutive seasons in nearly two decades since Detroit repeated in 1997 and 1998. One more win gives the Penguins the franchise’s fifth Stanley Cup, tying them with Edmonton for sixth all-time.

All four of Pittsburgh’s Stanley Cups have been clinched on the road with Chicago the last team to win the Cup on home ice back in 2015.

“Opportunities like this, they don’t come around often, so you want to make the most of them,” Pittsburgh captain Sidney Crosby said.

The Predators haven’t scored a goal in 63 minutes, 23 seconds since Filip Forsberg’s empty-net goal in Game 4. So Rinne will need to be at his best to give Nashville a chance at its first Game 7 and Pittsburgh’s third this postseason.

Rinne understands coach Peter Laviolette was trying to wake up the Predators by pulling the veteran after allowing three goals on nine shots in the first 20 minutes of Game 5. Crosby, Evgeni Malkin and Phil Kessel all put up at least two points each in that game.

Yet there’s been no question that Rinne, who has never won a start in Pittsburgh, will be in net Sunday night.

“Right now our backs are against the wall, and this is our opportunity and I think you try to do anything in your power and prepare the best you can for this one,” Rinne said.

The Predators know exactly what they need to do better against Pittsburgh. Part of that is being better in front of Rinne.

“We made mistakes in front of him,” Laviolette said.

Nashville may be without defenseman Ryan Ellis, who didn’t finish Thursday night’s loss. Ellis was among several Predators who did not take part in an optional practice Saturday. Ellis plays with Roman Josi on Nashville’s top defensive pair and is tied for third with 13 points this postseason.

The Penguins skated in Pittsburgh before flying to Nashville. Center Nick Bonino, who has missed three straight games with an injured left foot, did not practice for the Pens.

Pittsburgh couldn’t close out Columbus, Washington or Ottawa the first chance the Penguins had in each of their previous three playoff series. Coach Mike Sullivan thinks his Penguins are playing better, harder and smarter over the past two games.

“When these guys play a committed, inspired game the way they do and they execute, then their talent and their instincts are going to take over,” Sullivan said.

Having the Stanley Cup in Bridgestone Arena gives the Predators plenty of motivation as well in the first game they’ve faced elimination this postseason. Nashville went 3-1 in such games last year.

“Our motivation is the Cup,” Nashville captain Mike Fisher said. “We want to win it.”