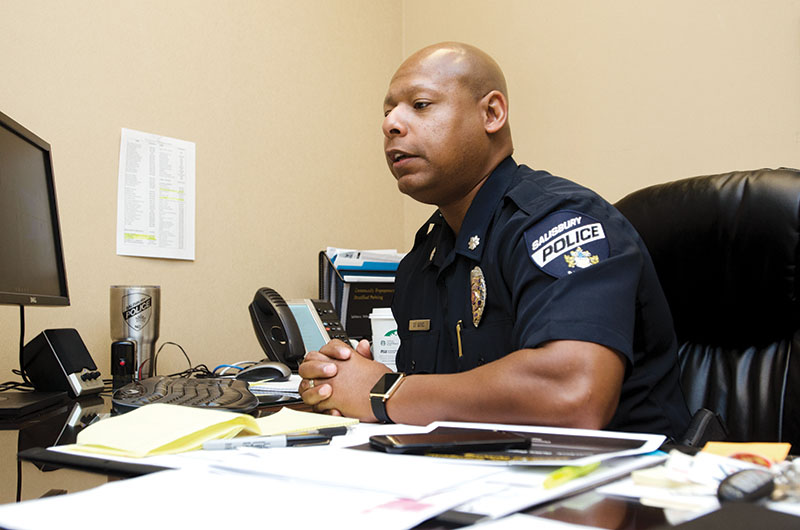 SALISBURY — He hasn’t yet been on the job a month, but Salisbury Police Department’s new Deputy Chief Shon Barnes is already thinking about how the department can create effective community partnership. In addition to an emphasis on working with community partners, Barnes said his other major goal within the department is to continue the initiatives Chief Jerry Stokes has been developing including recruitment and community policing efforts.

Barnes, who had previously worked for 15 years with the Greensboro Police Department, joined the city of Salisbury on May 15 with the role of supporting the day-to-day operations of the police department. He’ll work specifically on the department’s efforts to engage the community and create a strategic plan that will fit the needs of the Salisbury community.

While with Greensboro, Barnes was commanding officer of the Greensboro Police Department’s training division, where he oversaw training and education for the 678-member police force. He said what attracted him to Salisbury, was the, “opportunity to put into practice skills and education that I have developed over the last 17 years in law enforcement.”

One of the areas of focus for Chief Stokes has been staffing. There have been a number of firings, resignations, transfers to other agencies and retirements within the last few years. Barnes said he is cognizant that police departments all over the country are experiencing shortages right now, but he has some ideas that he believes can grow the department. Stokes has already put in place an officer who has been reassigned and whose main focus is recruitment.

Barnes said he has a plan to partner with Livingstone College and other HBCUs to guide minorities into the law enforcement career with Salisbury.

“If students meet the pre-established guidelines we would offer the student employment. My plan is to make sure that all persons feel welcomed to apply here at SPD. We may in the future hold “meet and greets” or recruiting events aimed at encouraging the LGBTQIA community members to apply. We want to create a police department that is totally representative of our community,” Barnes said.

He also wants to increase the internship program at the police department because “usually it’s a good gateway into the department and many have already completed part of the process,” he said.

Barnes also plans to create more opportunities for in-house training for the officers on crime analytics and problem solving. He said there are government grants available that will help get officers trained through the 21st Century Policing model. The department is already undergoing implicit bias training.

One of the changes that will be implemented is that every officer will get a neighborhood and every neighborhood will get an officer. The zones that were created in the previous administration will be divided into a much smaller area.

“The zones now are too big. They are too spread out,” he said of the officers.

Each officer will patrol in his neighborhood. He or she will get to know the people who live there and they will know that officer. As new officers are hired, they will also be assigned to a neighborhood.

He said they don’t want to give the impression that because they are short staffed that service will not be delivered.

The hope is to take advantage of a no-cost grant through the U.S. Department of Justice that would bring in researchers whose goal would be to see where the department is failing and what successes they’ve made, Barnes said. The assessment would look at policies, training, interactions with citizens, community expectations and operations.

The department would have specific recommendations for improvement and data on what should continue. He said this assessment was done successfully with the Fayetteville Police Department.

The idea is to create effective community partnerships. They’ve looked at partnering with mental health providers. It is Barnes’ philosophy that they can’t solve the problem without the partnership of the community and so with that there is a plan to increase active collaborations.

Barnes said although it may be some who believe he was hired to be the face of the black community, but to them he would say they’ve got the wrong person.

Some of the goals he accomplished in Greensboro, he said, can be applied in Salisbury.

His goals are to create a mission and vision statement that is integrated to move the department in the right direction. It has to be a shared vision, Barnes said.

“Officer accountability was very instrumental in our success. Everyone is accountable at all levels,” he said of the Greensboro Police.

“I like this police department. The people here want to do good work. They have the work ethic to get things done,” Barnes said.

He admits consumer confidence is low in policing and in Salisbury. He wants to hear from the public not only about what they feel the department is doing right, but what improvements could be made as well.