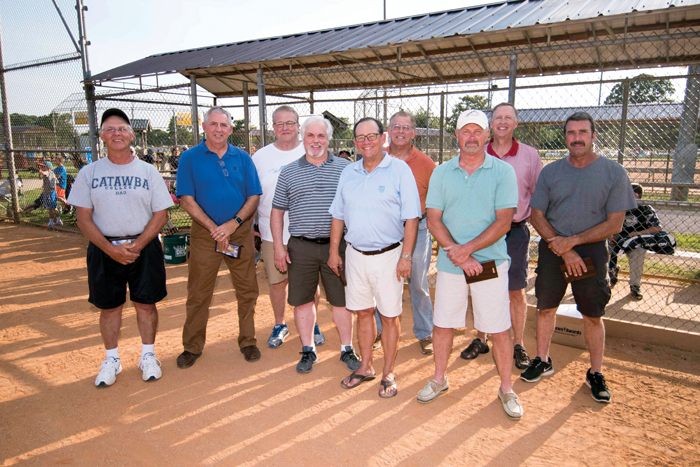 Little League baseball was quite different 50 years ago. Playing baseball was the center of a young boy’s life as an 11 or 12-year-old. The 1967 St. John’s Presbyterian team was no exception as they played their way to the league championship. Last Friday night, June 1, nine members of that team celebrated their exceptional season in conjunction with the 2017 championship game.

Kevin Auten, son of popular coach Gene Auten, remembered how special those days were for the boys. He said, “I was six years old when these guys were 11 or 12. Our lives were baseball. The Little League of that day in Salisbury involved eight teams, four of them civic and four churches. We played our games at McDaniel Field, near where Food Lion #1 is now on Mahaley.”

Many of the players, now in their early 60s, hadn’t seen each other for years, a few since the Little League season ended. But those memories were fresh and smiles were shared as the men reminisced about their playing days. Much of the conversation revolved around Coach Gene Auten, Kevin’s dad. Gene Auten demanded the best effort of every player, taught fundamentals and was the only coach to hold practices right before the games. Kevin said, “Dad made sure you wore the uniform right, folded your cap the correct way and he always had the most players wanting to try out for his team. One year, he had 110 kids wanting to play, but then we carried a roster of up to 30 during that time.”

Gene Auten, once drafted by the Pittsburgh Pirates organization, also had rules for the players while they were away from the baseball field. Easy smiles came as the grown men thought back to the days when they would do anything to be better players. Auten’s rules included no peanut butter, no swimming and no kissing girls on game days. Mark Ritchie said, “Chances were pretty slim of that last one happening anyway.”

Hoffner, owner of Father and Son Produce, had just moved to the area from Miami, Florida. He said, “I didn’t know anybody, but my grandfather made sure I got to the games.” Hoffner pitched as often as rules allowed — usually seven innings a week — and played first base otherwise. Schenk added, “Sometimes the West Rowan players rode together which included Hoffner, Link and me.” Schenk and Link both played in the outfield.

Now pastor of Calvary Lutheran Church, Wayne Cobb was the shortstop on the team. He told the participants in the current championship game, “You will remember this experience for the rest of your life. We were great for one season; we knew how to play as a team.”

There were so many special memories that it was hard to record them all. Gene Auten worked for City Motor Company in Salisbury as a parts manager. As part of his work arrangement, Auten got a Country Squire station wagon demonstrator each year and of course he used it for Little League baseball. Becky Auten, Gene’s wife and Kevin’s mother, said, “He came home from work, picked up the bats and balls and headed for the games. Gene loaded up those boys in the car and they played ball.” Auten took the boys to play Lake Waccamaw, a very good team. Cobb and the other players thought the Lake Waccamaw players were so good that they must have been 16 or 17 years old and drove to the games. They remembered the big mosquitoes and sleeping in the gym for those games.”

All the 12-year-olds in the Little League got a chance to travel to Atlanta each year for major league baseball. Gene Auten thought he could pack the Country Squire station wagon with boys and save on the cost for an additional bus. Becky said, “He called it the worst trip of his life!”

Still baseball was all important to the players. Jim Webb missed two days of basketball camp at Davidson College with coaching legends Lefty Driesell and Terry Holland just to play baseball. Webb played first base, right field and catcher and was remembered as the team’s biggest player.

Lots of the players were younger and played for St. Johns B-Team on Saturday mornings. Mark Ritchie was one of those. He said, “I played benchwarmer and some first base.”

Rick Schulenberger was the first player to wear flip-down sunglasses and he remembered Gene Auten using a fungo bat to hit high pop-ups for practice. The players had not seen either item before. Schulenberger played third base.

Two memories stood out. A young player named Dennis Bunker loved playing baseball so much that he rode a bus home from Myrtle Beach for a game and then rode another back to vacation, all by himself. Kevin Auten had a baseball glove with “Gladys” written in big letters on it. Of course, the St. John’s players called him “Gladys”. Kevin said, “It was my aunt’s glove. She was a heck of a player.”

Becky Auten summed up the Little League experience for the men. She said, “I have been a mom to a lot of boys. These were good boys and they loved playing baseball.”