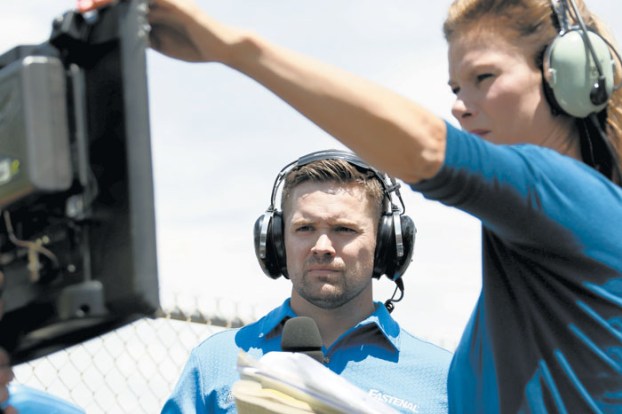 LONG POND, Pa. (AP) — Ryan Blaney was splashed with beer, accepted some handshakes and even gave a fist bump in a raucous victory lane celebration.

But with his car number nowhere on the leaderboard, the blossoming NASCAR Cup driver had to lift an ear on his headset to learn his result.

The Fox team loved NASCAR’s pinch hitter in the pits.

Looking for a new spin on the standard telecast, Fox used eight active NASCAR Cup drivers to provide insight — from the studio to the booth to the pits — during Saturday’s Xfinity Series race at Pocono Raceway.

“I got my notes ready ,” pit reporter Ricky Stenhouse Jr. said. “Gonna toss it up to Danica.”

That would be Danica Patrick, Stenhouse’s girlfriend, and one of NASCAR’s more popular drivers.

They didn’t have to worry about learning any new names at the finish: Cup regular Brad Keselowski held off the field of mostly developmental drivers to win the Xfinity race.

Fox benched its starters for one race and used the all-Cup lineup, believed to be the first time an entire broadcast team was comprised only of active athletes in their respective sport.

Kevin Harvick, who had booth experience on Xfinity and Truck telecasts, handled play-by-play and Joey Logano and Clint Bowyer were the color analysts. Erik Jones and Stenhouse served as pit reporters. Denny Hamlin and Patrick were the in-studio hosts.  Blaney worked the pits and was the victory lane host.

Fox announcers Shannon Spake, Larry McReynolds and Michael Waltrip opened pre-race coverage before the mics were officially turned over for the “Drivers Only” broadcast. Pit reporter Jamie Little made it official when she plopped a headset on Stenhouse.

“We’ve got a rookie out there doing an incredible job,” Patrick said of driver Kyle Benjamin.

The first-time TV crew pretty much handled themselves like seasoned pros, as well.

But there were some glitches.

Bowyer tried to speak to Benjamin over the headset and had a race question for the driver.

“What do you think?” Bowyer asked.

“This is not my fault!” Bowyer exclaimed, laughing.

Fox eventually worked out the kinks.

“Heck of a job. Keep it up,” Bowyer told the driver.

“Means a lot, coming from you,” Benjamin said.

But the foul-up, bleeps and blunders were part of the charm of the experiment that Fox surely hoped would give the sport a ratings boost. The drivers participated in Friday’s production meeting. And they all hustled to their positions following Cup practice on Saturday.

Positioned in the middle of the broadcast trio, Logano’s head spun like Regan MacNeil when he talked to Bowyer and Harvick on the pregame show. Patrick, who could transition to TV in the near future, even dropped a “boom goes the dynamite” reference.

“Bubba just getting his lunch. Having a little Goldfish,” Stenhouse said.

Blaney had a blast in the pits.

“There are so many people talking in my head,” he said, smiling. “We usually only have one person talking to us on the race track. The hardest part is just getting information and making sure you say it right and time it right and make it sounds like you know what you’re talking about.”

Blaney drew the victory lane assignment out of a hat in the production meeting.

Keselowski, who won for the first time in five Xfinity starts, wanted to watch the broadcast later that night.

“That oughta be hysterical,” he said.

Pam Miller, producer for “NASCAR On Fox,” said the broadcast was a success and there was a “high probability” the network would try the device again.

“They were just all spot on with everything they were doing,” she said. “It was a fun listen, even from a truck perspective.”

Austin Dillon and Regan Smith have signed on for guest analyst roles in upcoming races. But otherwise, it’s back to normal at the next race. Adam Alexander and Waltrip are usually in the booth. Little, Chris Neville and Matt Yocum are the pit reporters.

“This has been great job security for all the professional people,” Bowyer said.