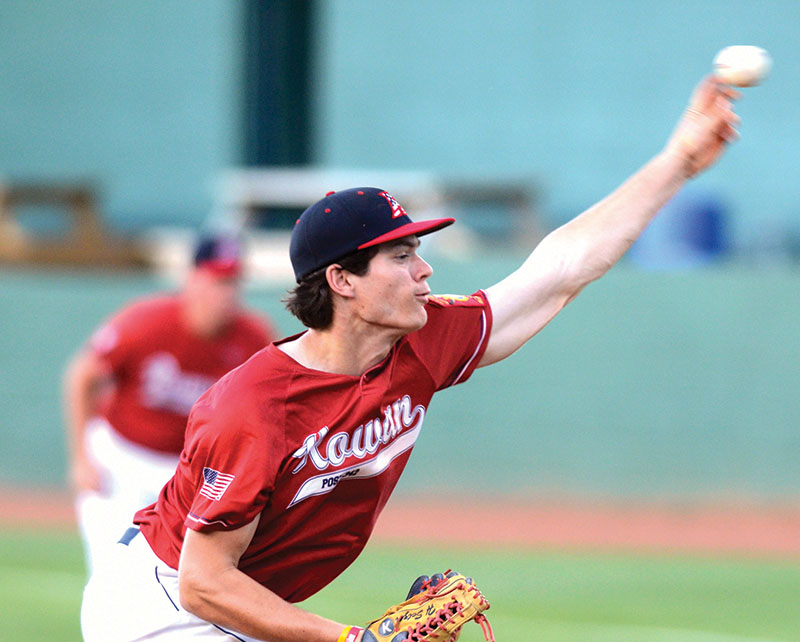 SALISBURY — Oops, they did it again.

For the seventh time this season, Rowan County’s unbeaten American Legion baseball team came from behind Friday night at Newman Park, where it rallied for a 6-2 non-divisional win against visiting Mocksville.

“It sounds better on paper,” coach Jim Gantt said after Rowan won its ninth game. “Better than it looks like. We’ve still got a lot of things we’ve got to do better, but the guys show up and compete. That’s the best thing.”

Post 342 hasn’t yet earned the “Coach Gantt Seal of Approval,” but the defending state champions are finding ways to prevail. Against shorthanded Mocksville (5-7), Rowan’s bullpen provided four innings of shutout relief, limiting Post 54 to one hit.

“Everybody talks about getting to Rowan County’s bullpen, because their starters are so good,” said Mocksville coach Charles Kurfees. “Well, tonight their bullpen was pretty tough.”

So was starting pitcher Hayden Setzer, the lanky southpaw who just finished his junior year at East Rowan. He bulldozed his way through five innings, yielding both Mocksville runs and four hits. But he struggled with his command of the strike zone, issuing four walks and unleashing a couple of wild pitches.

“I looked a little rusty in the second (inning), but I did my job and let the defense work behind me,” Setzer said after winning his game. “Yeah, we fell behind again, but honestly, I didn’t think much of it. I knew we had a great lineup and could always come back.”

Mocksville opened the scoring in the top of the second when Setzer walked three batters — including the Nos. 8 and 9 hitters —  and Drew Martin hoisted a sacrifice fly to left field. In the third Setzer yielded Tyler Campbell’s two-out, cloud-scraping home run and the first of Jalen Scott’s two doubles. He escaped by inducing an inning-ending groundout.

“Setzer’s got good stuff. If he didn’t, he wouldn’t have been in the ballgame,” Gantt said. “When he matures and believes that his stuff is good, he’s really going to be something special. Tonight he gave up a couple hits, but then settled in and showed us what he’s capable of.”

Setzer said the home run pitch was a fastball he hoped would touch the inside corner, but instead got too much of the plate. The double was simply a missed spot.

“He’s one of our best pitchers,” Rowan outfielder Lee Poteat said after reaching base five times. “We know he’s got lots of talent. It’s just a matter of him getting comfortable with how he pitches.”

Rowan scored its first run against Mocksville right-hander James Martin — a dependable reliever for Winston-Salem State this spring — in the last of the second. John Owen stroked a one-out double to the wall in right-center and scored on Tanner File’s two-out infield hit. Chandler Blackwelder’s run-scoring single to center tied the score 2-2 after four innings.

“We were down, but this game wasn’t as stressful as some of the others,” said Poteat, who delivered a leadoff triple in the last of the fifth and scored the go-ahead run on Brandon Walton’s liner to right field. “It’s always good to see us come from behind. We’re a team that never gives up.”

Martin faltered in the sixth when Rowan built a four-run lead. Trevor Atwood’s RBI-single to left made it 5-2 and ended his night. Walton greeted reliever Landon Bandy by drawing a four-pitch walk with the bases loaded.

“Martin’s a good pitcher,” said Kurfees. “We hurt him a little bit by not having our regular catcher (Matt Tullock), who graduated tonight.”

Down the stretch, Rowan’s bullpen never buckled. Reliever Brett Graham pitched two innings of hitless relief and struck out three batters. Will Brown worked out of an eighth-inning jam and fanned two before Griffin Myers pitched a 1-2-3 ninth.

“I really like this team,” Poteat concluded. “We don’t have any power hitters, just a bunch of driven guys who want to win another state championship.”

Nine games into that endeavor, it’s hard to doubt him.

NOTES: Setzer picked off a baserunner at first just two batters before Campbell homered. … Mocksville catcher Cody Smith was charged with three passed balls. … Rowan third-base coach Seth Graham missed the game because his wife Hillary went into labor with their first child. … RC is idle until Wednesday when Eastern Randolph visits, but Gantt said he’ll try to add a game with Mocksville on Monday. Stay tuned. … Mocksville has actually won six games this season, but its Memorial Day weekend victory against the Charlotte Crushers of the Carolina-Virginia Collegiate League — in which both teams used wood bats — counted as an exhibition.