Prep Baseball: Carson’s White is 3A baseball player of the year 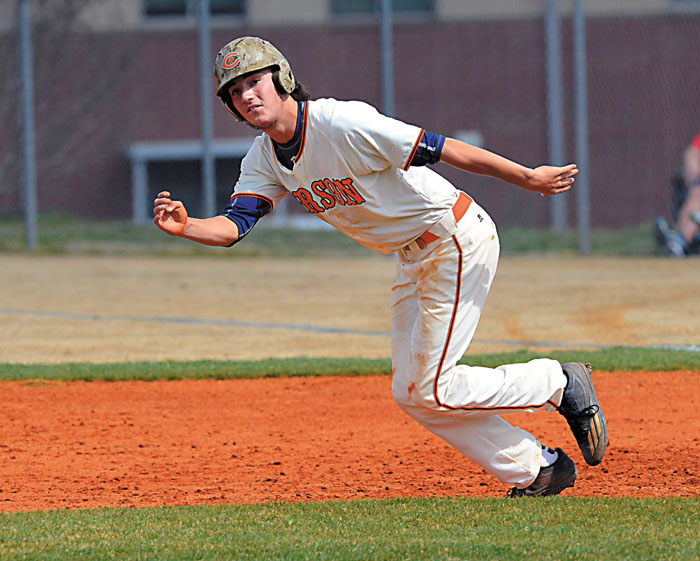 Wayne Hinshaw file photo/for the Salisbury Post ... Carson’s Owen White, shown during a game this spring against South Rowan, was selected as the state’s 3A high school baseball player of the year.

CHINA GROVE — You’ll be reading a lot about Carson High’s Owen White in the Salisbury Post in the weeks ahead.

White, a University of South Carolina commit who still has a year of high school ahead of him, is considered the best Rowan County baseball prospect since East Rowan’s Cal Hayes Jr. was a third-round draft pick by the St. Louis Cardinals  in 2002.

White was voted the South Piedmont Conference Pitcher of the Year award as a junior.

•  Patrick Snider Memorial Award as Rowan County Pitcher of the Year. White is a co-winner, along with East Rowan’s John Owen.

On Friday, White was honored by the North Carolina Baseball Coaches Association as the state’s Player of the Year for the 3A classification. Not a huge surprise, but a huge honor nonetheless, especially for a junior.

White has been good in football and very good in basketball for the Cougars, but it’s his baseball skills that set him apart. He’ll enter the 2017-18 school year as the top-ranked high school baseball player in North Carolina and one of the top 25 in the country in the Class of 2018.

He has electric stuff as a pitcher with a fastball that has been clocked as high as 94 mph, an advanced curveball and deceptive changeup. He’s a smooth, rocket-armed shortstop when he’s not pitching. At the plate, he’s a sensational hitter with some power. Even at South Carolina, White could be a two-way player.

As far as his high school career, he already holds the Carson school records for doubles (30) as a hitter and strikeouts (257) as a pitcher. He’s second in Carson history in career batting average (.388) and wins (22). Assuming good health, he’ll break a dozen or so school records as a senior— plus some county records.

White, who plays showcase baseball for the South Charlotte Panthers,  is on the All-State team for the second straight year.

Also making the All-State team for the second time is East’s Owen.  The senior, who signed with Pitt Community College, had another fabulous season on the mound for the Mustangs, with 83 strikeouts and nine walks. His overall numbers were very similar to White’s. He also batted .300 with 19 RBIs while playing five different positions for the Mustangs.

East’s Chandler Blackwelder, who made a sacrifice for his team by moving from center field to shortstop, made All-State for the first time.  He was right up there with White as a hitter, batting .432 with 12 doubles, three triples, two homers and 20 steals and scoring 24 runs in 27 games. Blackwelder signed with UNC Pembroke.

Owen and Blackwelder are key members of the Rowan County American Legion team that has gotten out of the gate, 9-0, the storied program’s strongest start since 2002.

East coach Brian Hightower has produced a number of All-State players in recent years. Connor Johnson and Michael Caldwell were All-State in 2014, while  Ike Freeman joined Owen on the All-State team in 2016.

Other notable All-State players for 2017:

North Davidson outfielder Austin Beck, a sure first-round pick in the upcoming MLB draft, was named the state’s 4A Player of the Year.

3A — Central Cabarrus two-way player Cameron Kepley, an Appalachian State signee who was the South Piedmont Conference Player of the Year, is All-State. Kepley batted .365 and won six games on the mound for a 12-14 team.

2A — Lexington pitcher/outfielder Will Lancaster, a Catawba signee, is All-State.

1A — The 1A All-State team includes North Stanly’s Carson Lowder and Will Moore.