‘He was good, but they were great’: Patton’s grandson hangs out with the’Tank Kids’ 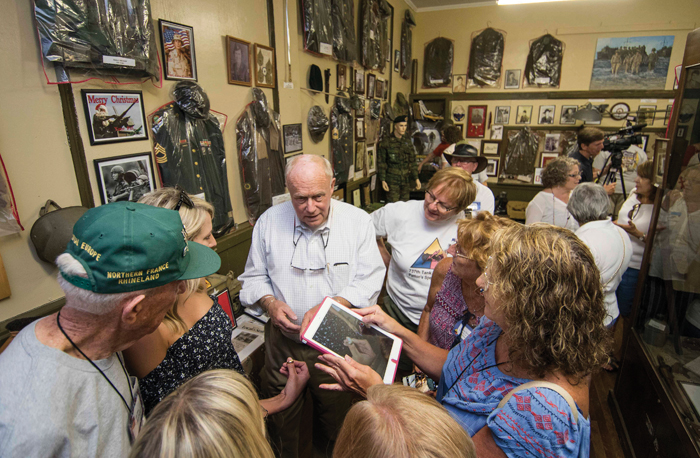 Pat Waters (center), a grandson of Gen. George S. Patton takes a tour of the Price of Freedom Museum on Friday with World War II veterans from the 737th Tank Battalion and their families. Jon C. Lakey/Salisbury Post

SALISBURY — This weekend, four surviving men of the 737th Tank Battalion — all in their 90s — have gathered in Rowan County for the group’s 70th reunion since World War II.

Melissa Deal Waller, whose father, Jim Deal, is one of those guys, wanted to surprise the 50 or so people at a Thursday night kickoff dinner at Faith American Legion Post 327.

Waller did not disappoint.

“If anybody could be with us tonight from back in the war days, who would you want it to be?” she asked

“Patton,” someone yelled out.

Pushing through the doors in back of the room came the next best thing — Gen. George S. Patton’s grandson, George Patton “Pat” Waters.

For the rest of the evening, the gracious Waters dined at the same table with Deal, who lives near Faith; Bob Kluttz of Salisbury; Jack Pritchett of northern Alabama; and Manny Perez of Illinois.

He regaled those family and friends with childhood memories of his famous grandfather general, the commander of the U.S. 3rd Army during the war.

Waters also toured the Price of Freedom Museum with the guys Friday morning, traveled with them to Richard’s Coffee Shop in Mooresville this morning and will have a big dinner with the “Tank  Kids” at the East Innes Street Blue Bay tonight.

The men under Patton’s command advanced farther, captured more enemies and liberated more territories in less time than any other army in military history.

“These are the kinds of people who made Patton,” Waters said, nodding toward the guys at his table. “He was good, but they were great.”

The battalion had a particularly Southern flavor. Of the 750 young men drafted for the battalion in 1942, 300 were from North Carolina and 150 each from Alabama and Georgia.

Incredibly, Rowan County had 32 young men in the battalion. Kluttz said he and Deal are the only Rowan guys living.

The battalion’s reunions, which used to be much bigger affairs, started in 1947 with a cookout in Greensboro and involved the former soldiers only.

But through the years, wives, children and grandchildren became involved. Proud offspring such as Waller grew up attending the reunions held in North Carolina, Virginia, Georgia, Tennessee, Alabama, Washington state and Kentucky.

Since 2013, the annual gatherings have been held in Rowan County. Waller said she extended an invitation for Waters to attend after meeting him at a Memorial Day ceremony in Thomasville in 2016.

Without notes, Waters stood in front of the reunion crowd and recalled childhood memories of Gen. George S. Patton.

And they were pretty good, considering Waters was only 4 years old. He would spend only 15 days around his grandfather in the summer of 1945, after victory in Europe had been secured. It was the last he would ever see of Patton.

Waters laughs, remembering it as 15 days of persecution for both him and his grandfather. When they first met, Patton was smoking a cigar, wearing his Army boots and carrying revolvers on his hips.

In effect, Waters says, the first words Patton said to him were, “Who the hell are you?”

Waters summed up that first meeting for his older brother, John, moments later.

“I told my brother that wasn’t Santa Claus out there,” Waters said.

But Patton did bear gifts — Army kind of gifts for four grandchildren he would be seeing for the only time ever during his 15 days in the States. (There would be 10 grandchildren total.)

Waters said his grandfather opened a trunk and presented the family with, among other things, a Mauser rifle, pistols, two uniforms and two helmets, which had belonged to dead Nazi soldiers.

One of the helmets had a bullet hole, and when the little Waters placed it on his head, the rough edges on the inside cut his scalp. Patton took him aside and told Waters that even though it had belonged to a German enemy, “that was the helmet of a hero.”

The German soldier had died for his country, and for that he was owed respect. Waters told Patton he understood, and he thinks that was the day he decided he would serve in the military himself one day.

Living as a boy in Washington, Waters spoke about visiting Walter Reed Army Hospital with Patton and the adulation the general received there. He also recalled how his grandfather had tried to teach him and John about courage.

Patton told the boys to cup their hands in front of them and not to make a sound as he flicked ashes from his cigar into their hands. Pat went first, which was a good thing, because the ashes falling into his hands were white and not so hot.

But glowing red ashes fell into brother John’s hands, and he screamed bloody murder. It left a scar, one that John has shown proudly throughout his life.

Waters also recalled Patton settling into a canvas lawn chair with a piece of cake and an alcoholic drink. The canvas seat kept sinking lower and lower until the whole chair collapsed in what sounded like an explosion.

Patton said some choice expletives — words Waters had never heard before. “He spoke a second language,” he and his mother concluded.

Patton didn’t like cats, and Waters claims he is partially deaf in one ear today because Patton spied their cat in the yard, pulled out his pistol and shot right next to his ear. The cat lost the end of his tail.

A gasp came from Thursday night’s audience when Patton opened his suitcase on wheels and brought out the Army boots Patton had died in. Patton returned to Europe after his small victory tour and was seriously injured in a vehicle accident on Jan. 8, 1946.

He and his staff car’s driver were apparently trying to reach a lighter for his cigar when a truck pulled in front of them. Patton lived for eight days until dying of an embolism.

Waters’ mother, Beatrice, was Patton’s oldest child. She married John K. Waters, a West Point graduate who was captured by the enemy on Valentine’s Day 1943 and remained a prisoner of war for two years, 10 months and 10 days.

It was Pat’s emaciated father, among other soldiers, whom Patton visited at Walter Reed. Pat’s dad would make a career of the Army, becoming a general like Patton.

Based on the recommendation of a friend from Albemarle, Waters attended Pfeiffer College. He played tennis and soccer at Pfeiffer and graduated with a business degree in 1965.

He then opted to join the Navy and served as a combat information officer. He spent considerable time on the USS Braine, a destroyer, which for about six months patrolled off the shores of Vietnam.

Waters scoffed at the notion he was in any danger in Vietnam compared to the ground troops. He said his most dangerous assignment during the Vietnam War was being on leave and drinking too much.

Deal said he asked Waters why he would serve in the Navy when his grandfather and father had such distinguished Army careers.

“You know what he said?” Deal recounted. “To keep from digging foxholes.”

Waters, 76, left the Navy in 1970 and worked briefly for Coca-Cola before founding a land development company in Baton Rouge, Louisiana. He has been living in Mount Pleasant, South Carolina , for more than 20 years.

When he retired in 2005, Waters started spending more time talking about Patton and sharing his memories. He serves on the board of the Gen. George S. Patton Museum and Center for Leadership in Fort Knox, Kentucky.

Waters stressed Thursday night that while he is proud to be a grandson of Patton, he did nothing compared to the men who as teenagers waded onto foreign shores and climbed mountains to preserve the country’s freedom.

“What you all endured,” Waters said, looking back toward Deal, Kluttz, Pritchett and Perez, “my lord!”