A different kind of family reunion: Families of the ‘Tank Kids’ share a lasting connection 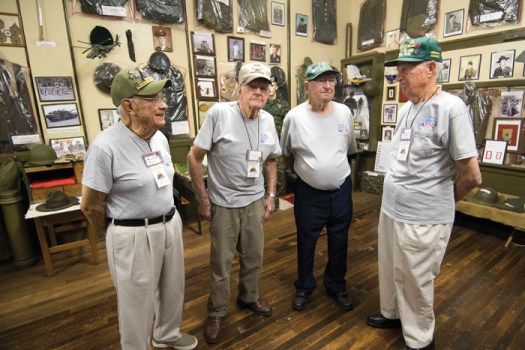 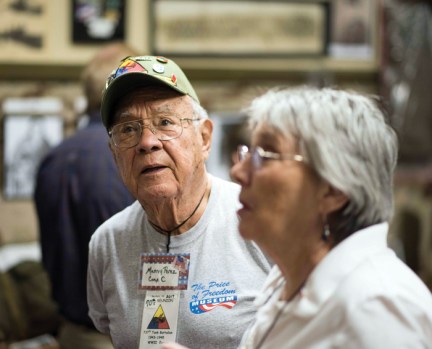 World War II veterans from the 737th Tank Battalion takes a tour of the Price of Freedom Museum on Friday. Manny Perez takes in the collection of military items on display. Jon C. Lakey/Salisbury Post 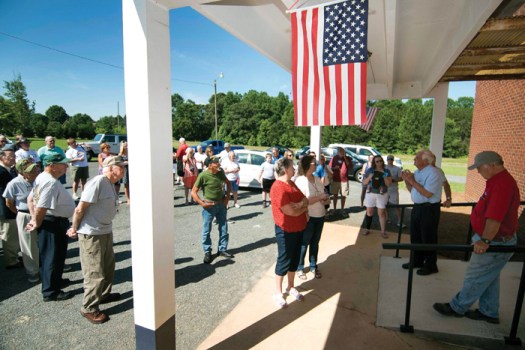 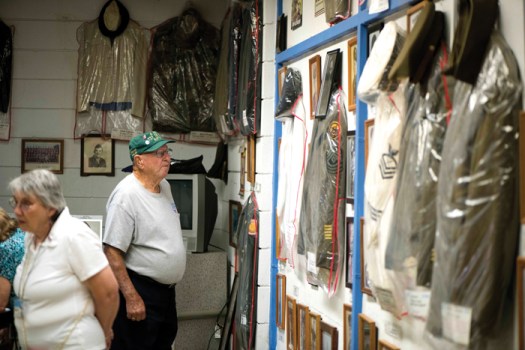 Bob Kluttz takes a tour of the Price of Freedom Museum on Friday with his fellow World War II veterans from the 737th Tank Battalion. Jon C. Lakey/Salisbury Post

After a night of being together Thursday and being surprised by a visit from Pat Waters, Gen. George S. Patton’s grandson, the veterans and families met at the Price of Freedom Museum on Friday morning in China Grove to take a tour and, of course, visit with one another.

The men from the 737th battalion — the “Tank Kids” who served under Gen. Patton — have been meeting for 70 years.

“I can’t think of a year that they have missed,” said Brenda Showfety Henderson. “As we lost more veterans, more of the families started coming.”

Henderson’s father passed away in 2013 while he was attending the reunion. “After a weekend of visiting with fellow veterans, he died among his military family,” Henderson said.

“It’s a lot like a family reunion,” said Dawn Pritchett Gilland, the daughter of veteran Jack Pritchett of Alabama. “I’ve grown up coming to these, and it’s always fun to see everyone.”

Gilland, who lives in Boaz, Alabama, also brought her 11-year-old son, Austin, to the reunion. When asked why he enjoyed coming, he explained that he loves history and enjoys hearing the stories told by his grandfather.

Austin recounted one of his favorite stories. “He saw a German soldier and a lady hiding in some weeds and asked them where they came from. Then he helped them out by giving them what was left of his rations.”

Jack Pritchett himself shared stories with friends and family at the museum. Asked to tell stories about Gen. Patton, he said, “Oh, I have stories. But I can’t repeat them.”

Asked why he would not share them, he said, “His words,” referring to Patton’s colorful speech.

After much encouragement from family and friends, Pritchett recounted tales about serving under Patton. He had a captive audience crowded around him — family members and friends holding their phones to record his animated storytelling.

Pritchett told one story about when he was on the border of France and Germany with Patton. Apparently, a soldier tried to blast a post out of the ground with a flamethrower, but he had no success. Patton looked at the soldier and said, “Hell, I could pee a hotter flame than that!”

More stories about Patton were told by his grandson, Pat Waters.

“He had total dedication. My grandfather wasn’t a politician; he was a warrior,” said Waters.

After telling a story about Patton finding him hiding under a bed during a thunderstorm, Waters said, “He taught me that you can’t avoid your fears; you have to face them.”

The veterans said they don’t want to stop having reunions anytime soon.

“It makes me cry, because when you pick up the phone to call one of them, you know that they will be there for you,” said Marilyn Dickerson, with tears in her eyes. “These people are like family.”