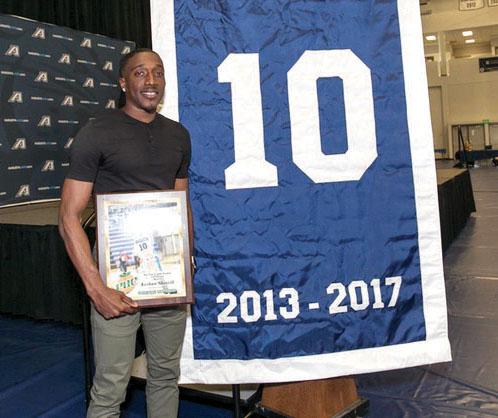 Augusta University graduate and West Rowan star Keshun Sherrill was the college's all-time leading scorer and had his jersey retired.

“I’m thinking to myself that this guy standing next to me looks a whole lot like Nate Britt,” Sherrill said. “Then I noticed he had a UNC bag, and I realized, ‘Oh, OK, it is Nate Britt.'”

On Tuesday morning, UNC graduate Britt and Augusta University graduate Sherrill were in Atlanta for the same reason — a pre-NBA Draft workout.

Sherrill had been driven to Atlanta by Augusta assistant Lenny Carlson.  The Hawks had invited six players for a tryout that included 1-on-1, 3-on-3, pick-and-roll and shooting drills. In the 1-on-1 stuff, the 5-foot-9 Sherrill, one of the country’s top Division II players, worked against the 6-1 Britt with outcomes that, according to reports from the Augusta folks, were very positive for Sherrill.

“That was my first workout for an NBA team, and to be honest, I didn’t sleep much in the days leading up to it because I was so anxious,” Sherrill said. “But once I got on the court, I felt calm and comfortable. I think I did well working against a guy who just won a national championship, a guy from the ACC, one of the toughest leagues in the country. That workout boosted my confidence. Hopefully, I’ll get invited to a few more.”

Sherrill has been on a basketball floor with Division I players before. When Augusta traveled to Wichita State last November for an exhibition to open the 2016-17 season, the Shockers, who had expected a breezy outing, had all kinds of trouble containing Sherrill. He scored 33 points in a six-point loss and earned rave reviews from Wichita State coach Gregg Marshall. Wichita State would go on to compile a 31-5 season, which makes what Sherrill did even more impressive.

Sherrill’s career playing for coach Mike Gurley at West Rowan (1,907 points, third in school history) was outstanding. He scored even more points than his 6-8 brother K.J., who played for the Charlotte 49ers. Sherrill’s career at Augusta, suiting up for Gurley’s Belmont Abbey College roommate, Dip Metress, was astounding. Peach Belt Conference Freshman of the Year. Peach Belt Conference Player of the Year and Southeast Region Player of the Year as a senior.  All-conference three times. All-America twice.

As a senior, Sherrill led the Peach Belt, one of the toughest D-II leagues, in points, field goals, free throws and minutes played and was second in 3-pointers and points per game.

He scored more points — 2,333 — than anyone in Augusta history or PBC history, and he did that while doing a sensational job in the community and the classroom and earning a degree.

Augusta coaches had a surprise in store for Sherrill at the school’s awards banquet.

“They told me that I should make sure that my parents could be there because they were going to present me with a plaque as the school’s all-time scoring leader,” Sherrill said. “But then they started talking about all my accolades and they presented me not just with a plaque but with my retired jersey (No. 10) in a frame. It surprised me so much that I shed a few tears.”

“So many great players were there,” Sherrill said. “Playing is a game where everyone was an all-star was a great experience.”

While he scored his last bucket for West Rowan five years ago, Sherrill remains motivated by the many college coaches who advised him he was too small to play big-time basketball.

Sherrill didn’t get to play in Division I, but it all worked out for the best. He’ll be a permanent legend in Augusta.

“I don’t regret anything about going to Augusta,” Sherrill said. “I grew up on and off the court every day for five years.”

The NBA Draft will be held in Brooklyn, N.Y., on June 22. Sherrill, 22, is realistic about it. There are only two rounds and only 60 athletes are going to be picked. He’s smart enough to know that a 5-9 D-II guy is unlikely to be one of those fortunate 60.

But Sherrill is a highly skilled and athletic offensive player, a fine shooter who can run a team. Workouts, like the one in Atlanta, can turn heads and get his name on lists. Sherrill’s primary goal now is to get on a team in one of the NBA summer leagues that are held in Las Vegas, Utah and Orlando. Shining in a summer league would open doors, if not in the NBA, then overseas.

Gurley has no doubt the heady Sherrill will be a splendid college coach when the time comes, but he should have many playing years ahead of him before he focuses on teaching the game he loves.

“I practice, I pray, and I hope for the best every day,” Sherrill said. “It’s an exciting time.”

US women score in second half, beat Sweden in…