Youngs, at heart: Over 70 years of marriage, Kat and Wilton know what the rules are 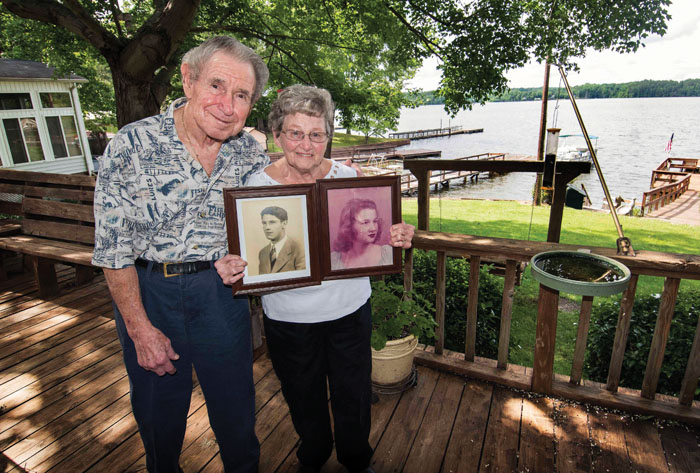 Kathleen and Wilton Young's family is working to throw the Rowan County couple a party this weekend to celebrate their 70th wedding anniversary. The party will be several days before the actual date of June 22. Wilton expects he will be spending that day at home recovering from all of the activities. Jon C. Lakey/Salisbury Post

They have an expansive view of the water from their recliners in the living room. For years, theirs has been the lake place where children and grandchildren come for all the big holidays.

Otherwise, the Youngs’ home has been the family destination for fishing, water-skiing, swimming — and just to pay the couple a visit.

On June 22, Kathleen and Wilton will mark their 70th anniversary. To celebrate, family and friends will attend a drop-in party at Liberty United Methodist Church from 2 to 4 p.m. Sunday.

When the actual anniversary date arrives later this month, Wilton says the couple might go out to eat, even though it’s a Thursday.

“Fridays, he likes to go to Blue Bay,” says Kathleen, known as “Kat” by most people.

That’s what Wilton calls her, too.

The Youngs know a lot about each other after 70 years of being together, day in and day out. Are there any secrets to partnerships that last this long?

“You just have to set the rules,”  Kat adds. “You have to work together … and you say your piece.”

You also learn to adapt. Early in their marriage, Kat dealt with Wilton’s love for racing motorcycles on weekends, even after he was seriously injured in a brutal wreck in Darlington, South Carolina. He broke a leg in several places, dealt with infection and was on crutches for about nine months.

But you get through it. “Daddy said being married is a whole lot of giving and taking,” Wilton says.

Kat says she still wants Wilton to give up chewing tobacco, even though he’s been doing it since 1952.

Likewise, Wilton has never liked baseball, which is one of  Kat’s passions. She enjoys attending Rowan County American Legion games with her sister-in-law, Nancy Powell.

Back home, Kat often secludes herself in a back bedroom to listen to Legion away games on the radio or take in an Atlanta Braves game.

Wilton bought their lakefront lot for $3,000 back in 1971. It was a lot of money then but sure seems like a bargain now. At first, he and his sons often would bring tents and camp out on weekends.

By 1975, the Youngs set a mobile home on the lot, and since 1981, they have lived there full time. They’ve had their health challenges. Wilton, 88, had open-heart surgery in 1984, and Kathleen has battled rheumatoid arthritis, though she doesn’t seem to slow down.

Only recently has Wilton relented and gotten rid of his bass boat.

Kat grew up in a family of 10 children. Her father was a trackman for Southern Railway who became a section foreman in Salisbury.

Kat’s family grew up next to the railroad tracks at 702 N. Lee St., and she attended Henderson, Wiley and Boyden schools.

Wilton spent his childhood near the river in Yadkin, the mill village that supported the N.C. Finishing Co. north of Spencer. Wilton had an identical twin brother, Wilbur, who died in 2009 and was the fellow who introduced him to motorcycle racing.

The boys also had an older sister, who lives today in St. Paul, Minnesota.

Wilton attended Yadkin School until the fifth grade, then Spencer High School, where he played football. Wilton said he was a good blocker and tackler, playing both offense and defense.

Coach Fred Holt once complained to the rest of the Spencer High team that Wilton was making 90 percent of the tackles. “They started calling me ’90 percent,'” Wilton says.

By the time he was 13, Wilton also was working part time at the Yadkin Cafe.

Kat and Wilton met on a Halloween night when Kat and a girlfriend took the bus to Spencer, where they met Wilton and his friend. Wilton’s friend had a car.

“He knew my life history before we got home,” Kat adds.

The girl from Salisbury made an impression on Wilton, even though she told him she had been dating someone else. When that fizzled, Wilton started cruising around the Fulton Street Drug Store, to which Kat and other Boyden High students often walked during their lunch periods.

Their first “date” was an evening when Wilton had his father’s car after he had dropped him off at a National Guard meeting. The couple started seeing each other on Friday evenings, Saturdays and Sunday afternoons after church.

“Most of the time, we stayed at home,” Kat says.

An uncle had a store in Spindale, and one weekend in December 1946, the couple were able to travel to the mountains with another young couple and spend two nights. It was more innocent than it might sound today.

The girls had their own bedroom, as did the boys, but there was a lot of laughing and talking across the hall. “It’s funny now,” Kat says.

But it was during that trip, in Forest City at the side of their car, that Wilton asked Kat to marry him. Even though they were both still in high school, Kat said yes.

“Didn’t nothing bother me then,” she says.

The next summer, Kat and Wilton ended up eloping and not immediately telling their parents about the marriage. They drove to the beach and were wed on June 22, 1947 — “at high noon,” Kat says — by a justice of the peace in Conway, South Carolina.

They headed back to North Carolina, and by the time they reached Albemarle, Wilton told Kat she had better take off her ring. He dropped her off at her parents’ Lee Street house and went home.

Wilton was 18; Kat, 17. The newlyweds found it difficult to find an affordable place to rent at first because the housing market was inundated with guys back from World War II who were marrying their sweethearts and also looking for housing.

The Youngs found what Kat calls “a cubby hole” in  Spencer. They rented attic space in a two-story house at the corner of Yadkin Avenue and Eighth Street. They used a cooler for an icebox.

The place was tiny — a kitchen, bedroom and living room. Three different families in the house were using one bathroom, and it was on the first floor.

The next spring, they could afford a bigger place, which included their first refrigerator. By 1954, with two babies by then, they moved into a new house on Pinewood Street in Salisbury.

Together, the Youngs did as much of the work, such as the wiring and roofing, as they could.

Once she married, Kat didn’t finish high school. As a teenager and early into her marriage, she held jobs at places such as S.H. Kress & Co., Tom’s Drug Store, Innes Street Drug and Salisbury Pharmacy.

In their courting days, Wilton liked the way she chopped ice at the drugstore soda fountain. She made plenty of lunch counter sandwiches, floats and banana splits. Later, Kat worked at the meat counter of Ketner’s Grocery before she joined Wilton at N.C. Finishing Co.

Wilton fashioned a 27.5-year career at the finishing company, though his father had other dreams for him and Wilbur.

After the finishing company laid him off, Wilton went to work for Cone Mill in Salisbury as a supervisor. But by 1989, “my heart started running away with me,” Wilton says, and he had to retire on disability.

Kat worked in the sewing room at N.C. Finishing and became quite proficient at folding and hemming sheets and pillowcases. She also was secretary for the union. When the sewing room closed, she was the last woman to walk out of the building.

Kat later secured a job with the Salisbury-Rowan Community Council and drove her Volkswagen Beetle to western Rowan County every day to work out of a church office.

The couple have a strong Christian faith. Wilton credits an Oral Roberts radio broadcast for healing the infection in his leg after the motorcycle accident. “It was a miracle,” he says.

He also credits God for helping him conquer his alcoholism. He hasn’t had a drink since 1989.

Pictures of their family fill the walls of the lake home. But nothing blocks the view of the water or the life Kat and Wilton have forged together.