US women score in second half, beat Sweden in friendly match 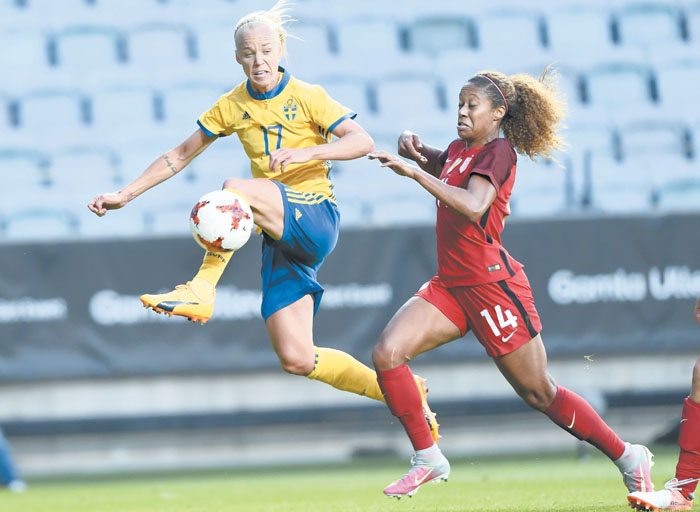 Sweden's Caroline Seger, left, vies for the ball with Casey Short of the USA, during the women's international friendly soccer match between Sweden and the USA, at Gamla Ullevi stadium in Goteborg, Sweden, Thursday, June 8, 2017. (Bjorn Larsson Rosvall/TT via AP)

Rose Lavelle scored in the second half, lifting the U.S. women to a 1-0 victory over Sweden in a friendly on Thursday night.

A perfectly timed run from the midfield by Crystal Dunn led to a through-ball for Lavelle inside the 18-yard box. Lavelle, 22, calmly put it home in the 56th minute for her second international goal in her fifth international appearance.

“I pulled out wide, Crystal popped in that pocket, and Crystal was running out the backline and laid an awesome ball to me and I hit it with my right foot,” Lavelle said of the goal. “When I got the ball, I was debating should I play it across the face of the goal or should I shoot it. I decided to be a little selfish.

“It was a good choice this time.”

Earlier, Dunn had a semi-breakaway, but her shot was saved by Hilda Carlen.

In the match at Goteborg, Sweden, Alyssa Naeher got the shutout, with lots of help from Allie Long. Sweden had a dangerous chance in the 44th minute when Caroline Seger got free in the box. Her shot from the left side of the penalty area looked to be going wide before it was blocked by Long. The ball bounced over sliding goalkeeper Naeher, but Long recovered to sweep the ball off goal line.

“To travel this far and get a result, sometimes those games you dominate and some you don’t,” coach Jill Ellis said. “And sometimes you just have to find a way to win, and I think we did that tonight.

“A lot of great lessons.”

The women will play Norway on Sunday to finish their two-game trip.

Rafael Dudamel’s comments Thursday came after the shooting death Wednesday of a teenage protester. Dudamel spoke hours before he led Venezuela’s Under-20 squad to a semifinal victory over Uruguay.

“President, it’s time to put down the weapons,” Dudamel said Thursday in post-game comments broadcast on TV from South Korea, where Venezuela will face England in Sunday’s final.

“Today a 17-year-old has filled us with happiness, and yesterday a 17-year-old boy was killed,” said Dudamel, referring to Samuel Sosa’s injury-time equalizer that forced the match into a shootout, and the death of teenager Neomar Lander during an anti-government demonstration. “These kids that go out on the streets, the only thing they want is a better Venezuela.”

Dudamel, who also coaches Venezuela’s senior team, has complained in the past about the difficulties fielding a competitive team amid so much economic and social turmoil. But the former goalkeeper has largely stayed clear of politics, preferring to hold the “Vinotinto” (for its red, wine-colored jerseys) as a model of national unity in a country beset by deep divisions.

His latest comments are the most forceful yet and are likely to run afoul of Maduro, who never misses an opportunity to celebrate the team’s success.

“Our boys of the Under-20 Vinotinto are the pride of a dignified fatherland, forgers of great victories,” he said in a message on Twitter earlier Thursday.

High-ranking officials have blamed Lander’s death on the explosion of a homemade mortar in his hands as he was preparing to launch it at security forces trying to control a violent protest in Caracas. But video circulating on social media showed him being carried away by paramedics bleeding profusely from a highway where police had been firing on protesters. The chief prosecutor’s office has opened an investigation.

The level of soccer in Venezuela has improved over the past decade, but the sport still struggles to get the same attention and sponsorship as baseball. Dudamel took over the senior team a little more than a year ago after 15 players threatened to quit over what they thought was a lack of support from Venezuela’s soccer federation. The team has already seen its hopes of reaching the 2018 World Cup dashed, having won just a single game of the 14 played in the South American qualifying round.

But the junior U-20 team has been the sensation of the tournament, breezing through the early stages with the best offense and least number of goals allowed.