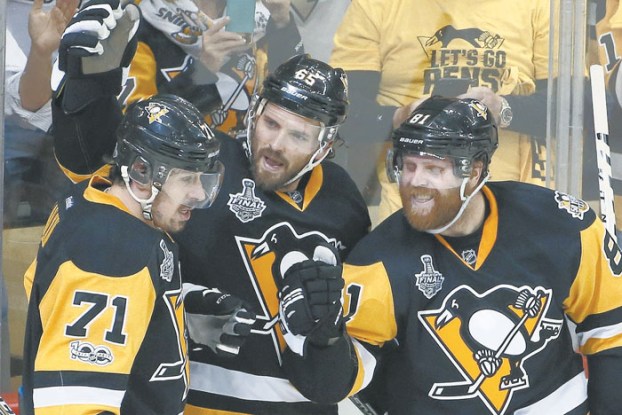 PITTSBURGH (AP) — The night started with a catfish throw.

It ended with haymaker after haymaker — both literal and proverbial — from the ever resilient Pittsburgh Penguins.

The defending champions provided an emphatic and repeated reminder of what makes them such a difficult out in a 6-0 demolition of the Nashville Predators in Game 5 of the Stanley Cup Final to take a 3-2 lead.

Pittsburgh will have a chance to become the first franchise in 19 years to win back to back Cups when the series shifts back to Nashville for Game 6 on Sunday night.

“Understand that we’re going to play a desperate team,” said Penguins captain Sidney Crosby after collecting three assists. “Nothing’s done yet and we’ve got a lot of work ahead of ourselves.”

So do the Predators, who can’t get back to Smashville fast enough.

Justin Schultz, Bryan Rust and Evgeni Malkin scored during a first-period barrage against Pekka Rinne that sent the Nashville goaltender to the bench for the rest of the night, all the good mojo he created during a pair of wins in Games 3 and 4 gone.

Conor Sheary, Phil Kessel — just as linemate Malkin predicted — and 35-year-old playoff newbie Ron Hainsey also scored for the Penguins. Crosby’s eventful night included becoming the franchise’s all-time leading scorer in the Stanley Cup Final, a two-minute roughing penalty for trying to dribble Nashville defenseman P.K. Subban’s head on the ice near the end of the first period and an flip of a water bottle onto the ice during play.

“It’s just one of those things it slipped out of my hand,” Crosby said. “I had a gesture with my hand and before I knew it the thing was flying across the ice. I know you’re not allowed to do that, so I’m not going to start doing it in the Stanley Cup Final.”

Matt Murray bounced back from so-so performances during Pittsburgh’s lost weekend in Nashville to make 24 stops while also benefiting from a dominant performance by the guys in front of him.

Penguins coach Mike Sullivan, as he has for each of the last two springs when his team finds itself in a tight spot, pushed all the right buttons again. He stuck with Murray, reunited Sheary with Crosby and Jake Guentzel, and stressed his team needed to play with urgency but not desperation after the Predators rallied to tie the series by outscoring the Penguins 9-2 during two wins in Nashville.

It took all of 91 seconds for Pittsburgh to get its swagger back.

Just 91 seconds after a Nashville fan flipped a catfish onto the PPG Paints Arena ice — a move that came shortly before a three-goal outburst by Nashville in Game 1 — Schultz powered home a slapshot to end an 0-for-15 power-play skid.

“We were on our toes tonight,” Schultz said. “We were really jumping and playing our game, playing fast. It all started with that start and got us going for the rest of the game.”

Rust made it 2-0 just 6:43 into the game with a nasty backhand flip over Rinne’s glove.

Then things got chippy (and a little weird) for the game’s best player. Crosby and Subban became tangled up behind the Nashville net late in the first period, with Crosby ended up on top of Subban. Crosby then started hitting Subban in the head repeatedly, eventually drawing a roughing penalty while Subban — who quipped that Crosby was complaining about Subban’s bad breath during a Game 3 exchange — went off for holding.

Malkin ripped a wrist shot over Rinne’s glove on the ensuing 4-on-4 to make it 3-0 with just 10 seconds left in the first. Rinne gave way to Juuse Saros at the start of the second period after stopping just six of nine shots, continuing his wildly uneven play. Rinne stopped 50 of 52 shots he faced back home in Games 3 and 4. He’s stopped just 34 of 45 in Pittsburgh during the series.

Saros hardly fared any better. Sheary took a pretty feed from Crosby and sent it by Saros 1:19 into the second to push Pittsburgh’s lead to four. Kessel ended a six-game goal drought 8:02 into the second. The score had been predicted by Malkin and it came just seconds after Crosby threw a water bottle onto the ice as the play went by Pittsburgh’s bench, a move he told referees was unintentional.

When Hainsey, who waited 907 regular-season games before reaching the playoffs for the first time this season, tapped in a pass from Malkin to make it 6-0, the stage was set for the Penguins to return to familiar territory.

The franchise has won all four of its Cups on the road. A shot at a fifth awaits Sunday, though it’ll hardly be easy.

The Predators are 9-1 at home in the playoffs, a place they will need to be a haven once again if they want to extend their improbable Cup run – and a flat-out odd final – back to Pittsburgh.

NOTES: Crosby now has 20 career points in the Stanley Cup Final, a new franchise record and one more than team owner Mario Lemieux. … Crosby also moved into a tie with Denis Potvin for 19th on the all-time career playoff scoring list. … The team that has won Game 5 in a 2-2 series has gone on to win the Cup 71 percent (17 of 24) of the time since 1939. … The teams combined for 100 penalty minutes (58 for Nashville, 42 for Pittsburgh). … Guentzel’s assist moved him into a tie with Dino Ciccarelli and Ville Leino for the most playoff points by a rookie in NHL history (21). … Penguins F Nick Bonino missed his third straight game with a lower-body injury. … Nashville F Colin Wilson made his series debut after missing the first four games with an undisclosed injury. Wilson skated on the fourth line with Frederick Gaudreau and Harry Zolnierczyk.

From staff reports The Kannaopolis Intimidators scored four runs in the eighth inning and won 5-1 at Lakewood on Thursday... read more