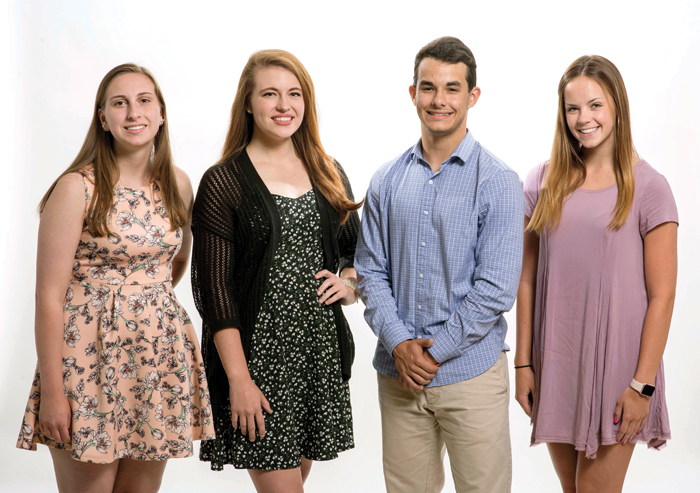 Bailey Herndon, of Salisbury, is the daughter of Mike and Carol Herndon. She attended Hurley Elementary and West Rowan Middle schools. She will attend the University of North Carolina at Chapel Hill where she plans to major in media and journalism. Her career goal is to be a broadcast journalist. For her senior project she studied child hunger.

Herndon was on the cheerleading and swim teams. She was Student Body president, Relay for Life captain, and a member of the RSS Leadership Team. She also volunteers with Food for Thought and is a member of Young Life.

A defining moment in her life: Meeting my friend Nicholas, who has several physical challenges. Nicholas constantly reminds me to never give up and to always keep a smile on my face.

The secret to her high school success: Stay organized and refuse to procrastinate.

If I had $10 million: I would donate 20 percent to my church and to the World Compassion charity. I would very invest wisely, buy my brother a new boat and treat myself to a New York City shopping spree.

Leyna Michelle Pence, of Cleveland, is the daughter of Janet and Trent Pence. Prior to her time at West Rowan High School, she went to Cleveland Elementary and West Rowan Middle schools. She will attend the University of North Carolina at Charlotte as a member of the University Honors Program, and she plans to major in biology. Her career goal is to enter the medical field as an MD. For her senior project, she studied bees and the problems that are causing their numbers to dwindle. She also constructed her own beehive, which she plans to use to keep her own bee colony in the future.

Pence participated in both JV and varsity softball her freshman year. She is on the executive council of Serve U at West, the Activities and Planning Committee for National Honors Society, and she is the secretary for Rowan County Student Leaders. She has also spent time assisting Cub Scout Pack 308 and playing travel softball.

A defining moment in her life: was when my softball career came to an end, and I decided to focus on my academics, being as involved in the community as I could, and taking advantage of new opportunities, such as being a part of my school’s theater production.

The secret to her high school success: To stay motivated and to always give the best effort to tasks. Even though you may not always feel like doing school work, going ahead completing it to the best of your abilities will be worth it in the end.

If she had $10 million: I would first take my family on a trip around the world to see various famous landmarks. After this, I would split the money between a fund to help students pay for college and start a campaign that would work to address issues such as climate change.

Madeline Leigh Wilhelm, of Mt. Ulla, is the daughter of Anthony and Cristina Wilhelm. Before attending West Rowan, she went to Millbridge Elementary and West Rowan Middle schools. She will attend North Carolina State University. For her senior project, she researched the history and purpose of the National Park Service.

A defining moment in her life: Placing second at the National FFA Agriscience Fair (Food Products and Processing Systems Division 2)

The secret to her high school success: Find one thing that you’re good at. Then give it everything you’ve got until you’re the best.

Timothy Dana Wilmot, of Cleveland, is the son of Dana and Terri Wilmot. He attended Cleveland Elementary and West Rowan Middle. He will attend the University of North Carolina at Chapel Hill where he plans to study statistics. His career goal is to be an actuary or a statistician. For his senior project he researched the physics behind hitting a baseball.

During his time at West, he was on the football, baseball and indoor track teams. He attends Cove Church, where he volunteers in the Children’s Ministry. Additionally, he volunteers for Bema Bouncers, his family’s business.

A defining moment in his life: Receiving hearing aids to help me to hear with more clarity.

The secret to his high school success: Dedication, determination and perseverance.

If he had $10 million: I would give $1 million to my church and use the other $9 million to invest in multiple businesses. That way, my money would come back quicker, and I could continue to invest and help others.