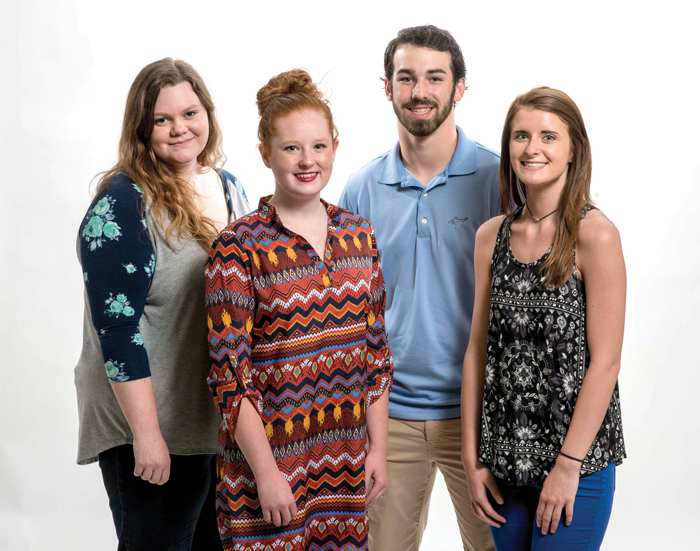 Abby Marie Blume, of Landis, is the daughter of Bradley and Susan Blume. Prior to her time at South Rowan, she attended Landis Elementary and Corriher-Lipe Middle schools. She will attend North Carolina State University to study biology with a neuroscience intent. Her career goal is to become a research scientist to study the brain.

Blume was a member of the swim team for four years. She was also vice president of the Patriots Club, treasurer of Rock the House Gingerbread Club and the section leader of the alto saxophones. She is the co-president of CHAOS Youth Group and a swim instructor at the South Rowan YMCA.

A defining moment in her life: In July 2016, I was blessed to go on a mission trip to Costa Rica. My youth group put on Bible school at many different public schools and we delivered bags of food to those in need. It opened my eyes in so many ways, not only did it bring me closer to God, but I learned to never take what we have for granted.
The secret to her high school success: Keep a good relationship with Jesus, surround yourself with good people and maintain a good balance between hard work and enjoying your high school years.
If she had $10 million: I would save $5 million in a bank. $2.5 million would go towards church, and mission work. I would donate $1.25 million to cancer research facilities and other charities. I would take the last $1.25 million and travel the world with my family and pay off undergraduate and graduate school expenses.

Austin Jordan Chrismon, of China Grove, is the son of Thad and Angie Chrismon. He attended China Grove Elementary and China Grove Middle schools. He will attend the University of North Carolina at Chapel Hill, where he plans to double major in exercise and sport science and nutrition. His career goal is to become a sports ,medicine physician. For his senior project he created a wooden baseball bat of his own.

Chrismon was on the football and baseball teams. He was also involved in Student Council (as Student Body President), National Honors Society and Relay for Life. Additionally he is an employee at Patterson Farm Market and Tours and is the basketball scorekeeper at YMCA.

A defining moment in his life: Earning a preferred walk-on spot to play football at UNC. “It showed me that hard work does pay off.”

Secret to his high school success: I set a goal and never lost sight of it. I surrounded myself with people who made me want to be better.

If he had $10 million: I would take care of my family and save for my future family. They are the ones who have made me who I am today and a large part of my success.

Connor Anne Henderson, of China Grove, is the daughter of Christie and Scott Henderson. She attended China Grove Elementary and China Grove Middle School. She will attend Western Carolina University where she will major in art education. Her career goal is to become a high school art teacher. For her senior project, Henderson created a wall-hanging art quilt depicting a lion.

In her time at South Rowan, Henderson played golf, was vice president of Junior Civitan, a member of The Gingerbread Club and a member of the Art Club. She is also involved with her youth group and Sunday school class at Mt. Moriah Lutheran Church.

A major defining moment in her life: When my grandmother was hospitalized for her diabetes. As many would say it was a wake-up call — promoting a healthier way of eating for not only her, but for me as well. It was a scary experience thinking I could lose someone who was a big influence in my life.

The secret to her high school success: The teachers. Without them I wouldn’t be where I am today. They pushed me to my limits, made me cry just a little, allowed me to rant and became more than teachers to me — friends. I hope to keep in touch with all of them after I leave South Rowan because of the impact they have made on my life.

If she had $10 million dollars: I would first put money away to help pay for my three younger cousins’ college expenses. Later I would use my money to buy a new house for my grandparents and parents. Then I would make sure to put money away in case of emergencies. Lastly, I would hope to create an animal sanctuary for various wildlife animals. It disheartens me to see how pollution, as well as other factors, have impacted wildlife.

Madison Taylor Temple, of Landis, is the daughter of Kristin Kilgore and Alan Temple. She attended Sadler Elementary and Stanley Middle schools. She plans to attend the University of North Carolina at Chapel Hill where she will major in biology and minor in Spanish. Her career goal is to become an anesthesiologist. For her senior project, she worked with an abused horse, transforming it into a therapeutic horse. The horse she worked with is now being used as a therapy horse for children at Smith Hollow Farm.

A major defining moment in her life: Growing up a diehard Duke fan I can honestly say that not only getting accepted to but deciding to go to the University of North Carolina at Chapel Hill was a defining moment in my life. I never thought I would wear the lighter shade of blue, but I proudly show it off now, and I know my future at Carolina is bright.

The secret to her high school success: I would have to credit my high school success to the simple secret of never giving up. The past four years have been filled with not only great times but some very trying times. It was my perseverance that lead me to where I am today.

If she had $10 million dollars: I would donate to the scholarship organizations that were present at my senior awards ceremony and put it towards furthering my education.