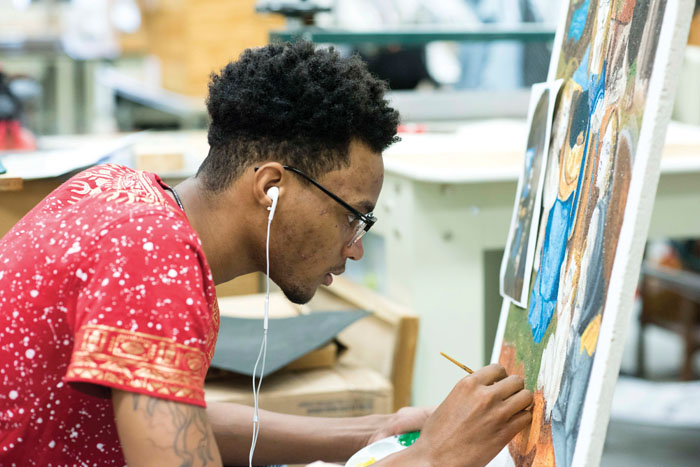 SALISBURY — Matthew Wright has only been at Salisbury High School a year, and it’s been one that brought good and bad things.

Matthew, who likes to paint and draw, is enrolled in the school’s advanced art class, and it’s been one he enjoyed. But he also had to miss a lot of school early in the year after he had surgery.

“I grew up with a prosthetic,” he explained.

He was born premature and slightly underdeveloped, resulting in an amputation of his right leg when he was just 6 months old. Now 18, the original prosthetic could no longer support his weight. Matthew got a reduction — a raised amputation — done at the beginning of the year.

“It was pretty shocking,” he said.

While the reduction was expected, he explained that it was difficult to experience a surgery like that. He’d been too young to remember the first one, he said.

While the new prosthetic now bears his weight and eased the pain he was experiencing, it came with some drawbacks. Matthew used to swim and play basketball, things that are now difficult for him.

It’s been a rocky year for Matthew and his family. His mother, he said, was his “lifeline” while he recovered from surgery. And graduation?

It’s been hard to excel this year, he said, but Matthew still has his dreams. He wants to go to art school and study digital media, video game art or theatrical art and makeup.

He said he likes painting because if he creates something “it’s always gonna be there.”

Matthew said he’s not sure which college he’ll be going to.

“It’s a scary thought, the future,” he said.

But he is looking forward to taking his time, traveling and living a life beyond just going to school every day.

The senior has lots of advice for students entering high school, or those who might be struggling. He said he’d encourage students to branch out and try something new; to remember that high school is “something you’re going to look back on,” so they shouldn’t stress about it. And, above all, “Just take life one day at a time,” even if that means setting tiny goals each day.