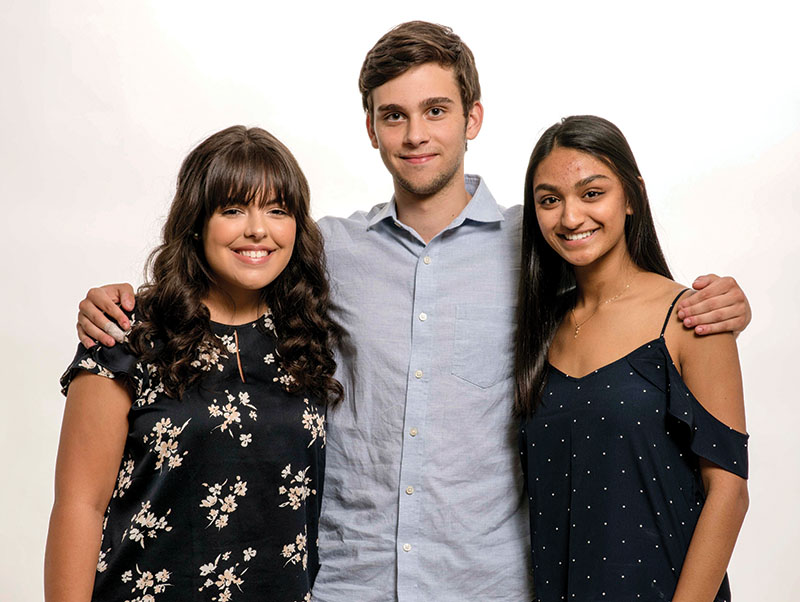 JON C. LAKEY / SALISBURY POST The All Rowan County Scholars for 2017 from Salisbury High school are (from left) Isabella Alvarez, Mathias de Comarmond and Sharmi Amin. Not pictured is Juliana Anderson. Tuesday, May 30, 2017, in Salisbury, N.C.

Sharmi Amin, of Salisbury, is the daughter of Dr. Chetan Amin and Dr. Hetal Amin-Patel. She attended Salisbury Academy prior to her time at Salisbury High. She will attend Duke University where she plans to double major in evolutionary anthropology and global health as well as being on the pre-med track. Her career goal is to be a surgeon. For her senior project she studied ways to assimilate alternative medical treatments into mainstream practices. To research this, she helped organize a music therapy program at a local nursing home, Trinity Oaks.

Amin was a member of the swim team for four years. She was been president of the Key Club, worked with The Backpack Project, and she founded a program called Greener Generations. Additionally, she interned at the Brian Center, Piedmont Family Medicine and Trinity Oaks.
A defining moment in her life: when I opened my Duke acceptance letter. It made me realize that all of my hard work and the way I have academically challenged myself over the past few years has finally paid off. The moment was one of genuine pride for my parents, and I am so grateful that I was able to give that to them.
Secret to her high school success: I do not think there is a secret to success. I would tell any student that accomplishment is the result of hard work, dedication and perseverance. Every student has the potential to accomplish their dreams, but they must be strong and courageous in the journey to work for them.
If she had $10 million: I would donate it to Médecins Sans Frontières, also known as Doctors Without Borders. I believe that this organization is sort of an unsung hero, and I plan to one day participate in their fight for unified global healthcare.

Juliana Tyler Anderson, of Salisbury, attended Salisbury Academy prior to her time at Salisbury High. She will attend the University of North Carolina at Chapel Hill where she plans to major in public health and minor in Spanish. Her career goal is to work in different countries where community health is poor and to provide children and families with the education, materials and assistance needed to live a healthier, cleaner and longer life. She studied the medical benefits of reconstructive surgery for her senior project.

Anderson was on the volleyball, basketball and soccer teams at Salisbury. She was the vice president of her sophomore, junior and senior classes. She participated in the Key Club and was vice president her junior year and president her senior year. She is also a charter member of Rowan County Student Leaders. Additionally, she is a member of St. John’s Youth Group, and she attended the 2016 Tar Heel Girls State.

A defining moment in her life: was the day I was accepted into UNC-Chapel Hill because it was the first time I felt like all my hard work with volunteering, being a dual-sport athlete, participating in clubs and maintaining a high GPA throughout high school had actually paid off.

The secret to her high school success: I never compared myself to others, only to what I knew I was capable of achieving.

If she had $10 million: I would start a nonprofit organization that focuses on enriching the lives of the less-fortunate youth in second and third world countries so that they have an equal opportunity as I did to succeed. This organization would supply these children with proper sanitation to reduce disease-prone illnesses, educational materials and current technology so that the children have an unlimited amount of resources to further their knowledge.

Isabella Elise Alvarez, of Salisbury, is the daughter of Tyler and Chanty Kent. Before attending Gray Stone Day School, she went to Salisbury Academy. She will attend Duke University where she plans to double major in biology and public health with hopes of being a doctor. For her senior project she researched the decriminalization of drug use.

A defining moment in her life: Deciding that I wanted to be a doctor towards the end of my sophomore year. My mother was sick for the majority of my life, and after her passing I realized that I wanted to spend my life helping people like her.
The secret to her high school success: I was never an athletic person, so clubs and academics were my forte. I had really high standards for my work. Even if a test was going to be seemingly easy, I would still study hard until I knew all of the information front and back. I always made sure I worked until I felt perfectly confident in my work — which took a lot because I’ve always been a perfectionist. This translated well into good grades and successful club endeavors. A lot of the time it also helps to just go the extra mile —people always appreciate it, and you’ll be a better student and person because of it.
If she had $10 million: I would contribute to Harvard and MIT’s type 1 diabetes research.

Mathias de Comarmond, of Salisbury, is the son of Charles and Martina de Comarmond. For his elementary education he attended Meadowlark Elementary School, Salisbury Academy and Sacred Heart Catholic School, and for his middle school education he attended Sacred Heart Catholic School. He will attend Duke University where he plans to major in biology. His goal for the future is to pursue a career in research, helping to expand the biological understanding of cancer. For his senior project, he worked with and helped establish “My Life, My Story,” a program in which volunteers record the life stories of veterans at the Salisbury VA Medical Center.

A defining moment in his life: my first interview with a veteran.

The secret to his high school success: Take advantage of every opportunity and, maintaining well-roundedness, and pursue community service that aligns with your future career interests.

If I had $10 million: I would donate the money to cancer research facilities, the “My Life, My Story” program and cover the educational expenses (as well as debt in general) of my family.