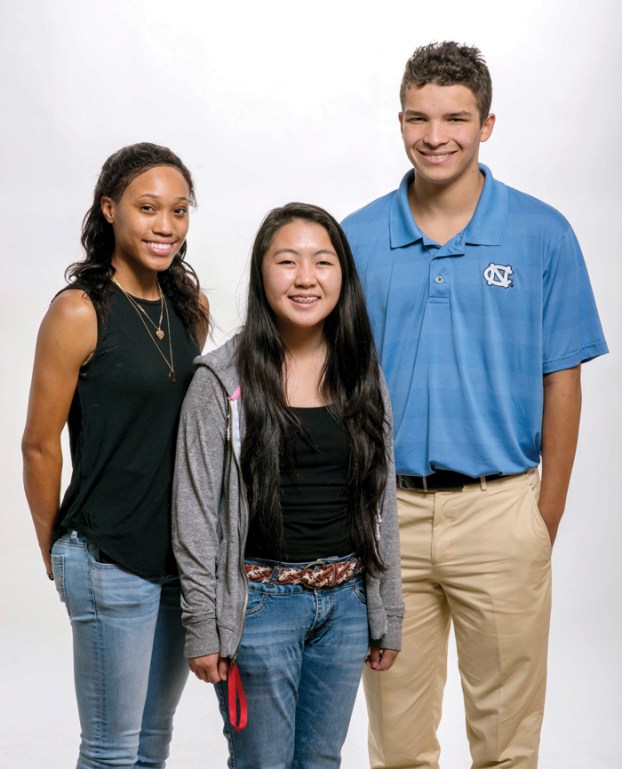 JON C. LAKEY / SALISBURY POST The All Rowan County Scholars for 2017 from North Rowan High school are (from left) Payton Russell, Maixe Vang and Arthor Smith. Not pictured is Brianna Whithe. Tuesday, May 30, 2017, in Salisbury, N.C.

Payton Precious Russell, of East Spencer, is the daughter of Alisa and Thomas Russell. Before attending North Rowan, she attended Sacred Heart Catholic School. She will attend North Carolina A&T State University where she plans to study bioengineering. Her career goal is to be a physician. For her senior project she studied the history of track and field.
During her time at North, she was a member of the track and field and basketball teams. She was also a member of the National Honor Society, a member of the superintendent leadership team, and the secretary of the Student Government Association. She volunteers with the Delta GEMS as well as with her church youth group.
A defining moment in her life: was being told I was someone’s role model. It motivated me to do everything to the best of my ability and to be cautious of my actions.
The secret to her high school success: Stay focused and remember to always keep your future in mind.
If she had $10 million dollars: I would save half of it, and then the rest I would divide to donate to my community, the American Heart Association and the Alzheimer’s Foundation.
Arthor Smith-Ayala, of Salisbury, is the son of Georgia Smith. Before attending North Rowan High School, he attended North Rowan Elementary and Randolph IB Middle schools. He will attend the University of North Carolina at Chapel Hill, where he plans to pursue a bachelor’s degree in biology. He hopes to be a pediatric surgeon. For his senior project he researched the history and modern applications of holistic medicine.
While at North High he was on the varsity tennis team, a member of the Health Occupational Students of America and the National Honor Society. He also volunteers with Spencer Presbyterian Church.
A defining moment in his life: was when I attended the National Student Leadership Conference (NSLC) at Harvard medical school this past summer.
The secret to his high school success: More than anything else, determination is what has helped me through my high school career.
If he had $10 million: I would take care of my family and invest in the stock market.
Mai Xe Vang, of Salisbury, is the daughter of Pao Vang and Mai Thao. Before attending North Rowan High, she attended North Rowan Elementary and North Rowan Middle schools. She will attend the University of North Carolina at Chapel Hill. Her career goal is to be an educator. For her senior project, she researched teaching and education. During her time at North, she was on the Varsity Tennis Team. She was also vice president of the Student Government Association. She helps with the Annual Hiddenite Festival at her church, assists with neighborhood cleanup, and volunteers at a local nursing home.
The secret to her high school success: Staying focused and not giving up. There were many times when I felt like quitting or just felt overwhelmed with all the things that were going on, but I continued to look at my goal and strive for it. Asking for help was a big contributor to how I was able to get this far. I was never afraid to ask for help whenever I needed it. I had so many questions, and it was great to have a team willing to answer them all for me.
If she had $10 million: I would get my whole family out of all of their debt and then buy a nice house for us to live in. Traveling is one thing that I have always wished to do, so after taking everyone on a long and peaceful vacation trip, I would put the remaining balance into a bank account for it to gather interest for future trips.
You Might Like