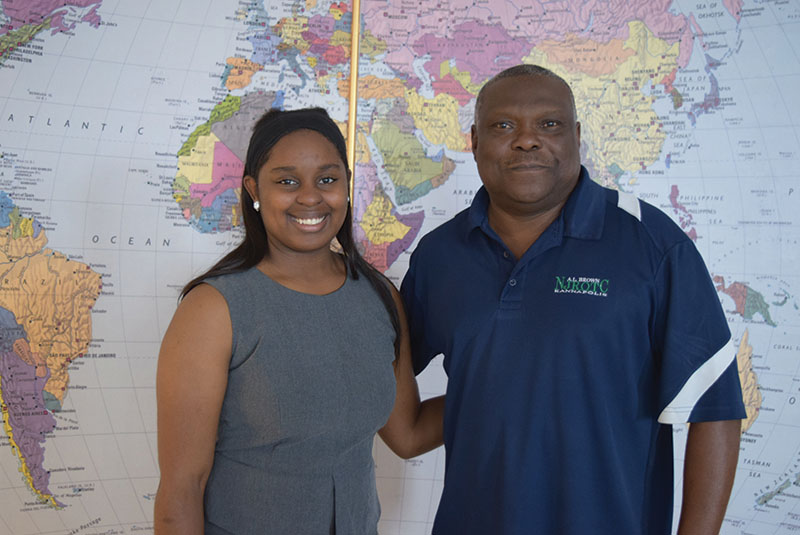 KANNAPOLIS — For A.L. Brown senior Nykalia Lancaster, high school was about learning to be kind.

“I guess you could say that my struggles started when I was born,” she said.

Nykalia said she grew up in a poor family. Though her parents didn’t have much, they gave her and her siblings what they could. It was hard, but life wasn’t bad. But when she turned 8, Nykalia went into early puberty — that’s when the bullying started.

She described the teasing as relentless, and said she became depressed while still in elementary school. But Nykalia is also a fighter, and being bullied made her angry. It was a feeling she repressed and repressed until she “would get so mad I’d explode.”

“I decided, ‘I’ll start fighting back. I’ll tell them how I really feel,’ ” she said.

But the strategy didn’t stop her tormenters, and it didn’t help her feel better — the only thing it did was get her suspended a lot. And by the end of her freshman year in high school, Nykalia had a 2.3 GPA.

“I didn’t know what I should do. I was on the verge of quitting and giving up,” she said.

At the time, she had just joined A.L. Brown’s JROTC. Chief Reginald Johnson told cadets at the beginning of the year that if they were suspended from school they would be kicked out of the program — but despite a rocky suspension record, Nykalia was not asked to leave.

“He didn’t give up on me,” she said of Johnson.

Instead, Johnson talked to her, and he and another teacher took her Christmas shopping. It was the first time, she said, that she felt like she had people at school who cared about her.

And remembering how participating in a middle school wrestling team energized her, Nykalia decided to try to find constructive ways to deal with her anger and frustration. She started keeping a diary, read her Bible, began singing in the church choir and threw herself into community projects. As a senior, she’s logged more than 100 hours of service in the JROTC program.

“I actually don’t have much anger anymore,” she said with a smile.

But her struggles weren’t over. Her sophomore year, Nykalia’s family home caught fire. She, her six siblings and her mother were forced to move in with an aunt suffering from drug problems.

“We were just broken. We didn’t know what to do,” she said.

But they managed to secure the house after negotiating with the landlord, and the aunt moved out. Currently there are 12 people living in the house, Nykalia said. She works part-time to help out with living expenses — but said the job has left her so tired that she’s missed a lot of days at school.

But Nykalia likes to look on the bright side. The house is crowded, but she believes that it’s brought her family closer together.

“There’s no shutting the door and not wanting to talk to anyone. It’s always an open door,” she said.

She relies on her faith and her dreams for the future to help get her through. She said she’s a bit scared of graduating and coming up with tuition for college — but she’s got a strong goal. Nykalia wants to work for the Kannapolis Police Department, and her big dream is to become a forensic psychologist for the FBI. So while the future is uncertain, “I’m also ready. Ready to show people … that I am here and I am making it,” she said.