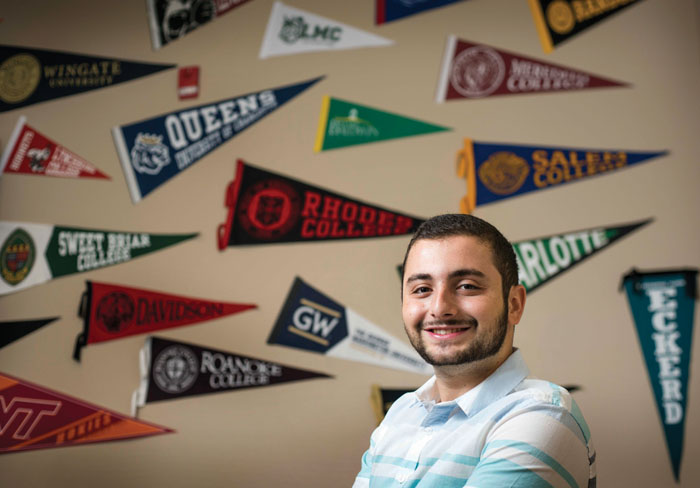 For eight years, Hajjar called Damascus, Syria, home, but his family moved to Charlotte just before the start of his junior year. Hajjar, who was born in Los Angeles, Calif., said his family moved to Syria when he was 8 years old in order to be closer to family.

“Family is really important to us,” he said.

It was there, in Damascus, that he got his schooling. Hajjar said he has good memories of the country, which has been making headlines due to unrest for several years. People in Syria were friendly, outgoing and shared a strong sense of community and connectedness.

“There you have a sense of, almost like you belong,” he said.

Hajjar said he was in seventh grade when uprisings and protests began spreading across the Middle East. Even though Damascus was relatively safe, he said, the conflict still made itself felt.

“At first it felt almost unreal,” he remembered.

He and his family would hear about uprisings in Libya, Tunisia and Lebanon, but Hajjar said no one thought the trouble would ever come to Syria. But it did. At first, it was just protests — Hajjar said he remembers passing by one once on the way home from school. But then, he said, reports came in that people were dying.

“And then (protests) stopped because people were getting shot at,” he said.

While Hajjar focused on school, Damascus became increasingly militarized — checkpoints cropped up across the city and the country, and tanks littered the street to schools.

At first, Hajjar said, he didn’t understand what was happening.

“It didn’t really affect me until we started hearing gunshots and bombs,” he said.

He and his classmates could hear bombshells and shooting from their classroom, and eventually moved school buildings to a location in central Damascus. A little while later, he recalls, he heard about shootings happening at the location of his old school.

“That’s when we realized the conflict was much closer to us than a news outlet,” he said.

Eventually, Hajjar’s family moved back to the United States in order to be closer to his father, who had been working here for some time. At first, Hajjar was unhappy with the move. He hadn’t spoken English for eight years, and had to adjust to a different culture and make new friends.

And while he’s managed to adjust during his time at Gray Stone, he said he still misses his friends and the extended family he’s left behind. They often ask when he’s coming back to visit.

But he’s found things to love about living in North Carolina. The almost familial bond with strangers isn’t something that exists only in Syria, he said.

“Here in Stanly County I feel there’s something very similar,” he said.

Hajjar plans to go to the University of North Carolina at Charlotte and major in biology or a similar subject before pursuing a career in medicine. It’s a career goal that he said was inspired by Gray Stone teacher Sherri Efird.

While the initial move was hard, he’s made friends here, and said he’ll miss Gray Stone.

“It’ll be an interesting change for sure,” he said.