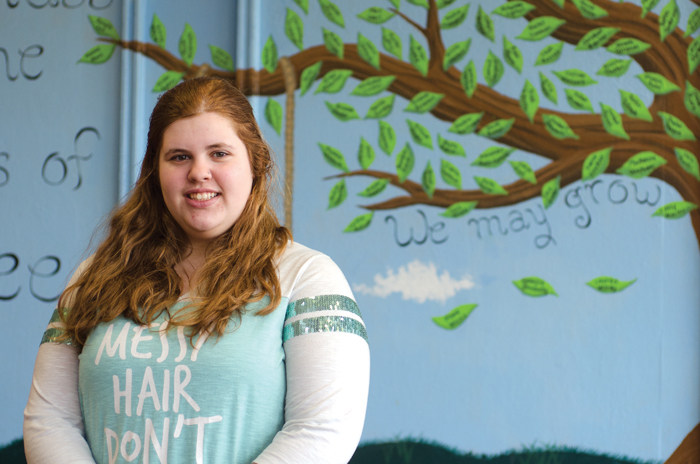 GRANITE QUARRY — Leah Russell is a student who refuses to give up on her dream. For the East Rowan High School senior, graduation is the end of a long journey and the start of a new life.

“I’d like to make a name out of myself,” she said.

Leah is passionate about theater — a love that began the first time she took a drama class.

“I stepped in the room — in that moment I knew what I wanted to do,” she remembers.

In the fall she’ll start at University of North Carolina at Greensboro and major in theater education, but pursuing her dream hasn’t been easy. The summer before her sophomore year, Leah’s mother died, leaving she and her younger brother in the care of family members.

Russell’s brother moved to live with a grandparent in Montana; Leah moved in with an uncle.

“All in one summer it got ripped away,” she said of her former life.

While family and friends encouraged her to continue her summer as normal, Leah said she spent the vacation “in a state of shock.” The next year, she left public school and continued her education as a home-school student.

But the seclusion caused her to fall into depression, and Leah said she forgot her goal of going into theater. Realizing something had to change, Leah moved in with her godparents and began attending East Rowan.

And while she still struggles, the change has been good for her.

“I like to stay as positive as I can,” she said.

School helps her keep her mind off things while her focus on her goal of going to college keeps her moving forward. And her return to the stage has helped her deal with the events of the past three years.

“When I’m on stage it just lets everything out. … It’s my release, in a way,” she said.

While at school, Leah said she’s seen other students go through similar struggles, and said she’s found friends to help her through.

Leah said she would tell those in a similar situation not to seclude themselves, and to keep pushing forward.

“I took a year off from my dream, and now I’m behind, technically,” she said.

So she would encourage others not to give up, and not to take time off.

If all goes as planned, Leah said she’d love to work in a theater, teaching classes to students who are just as passionate about the art as she is.