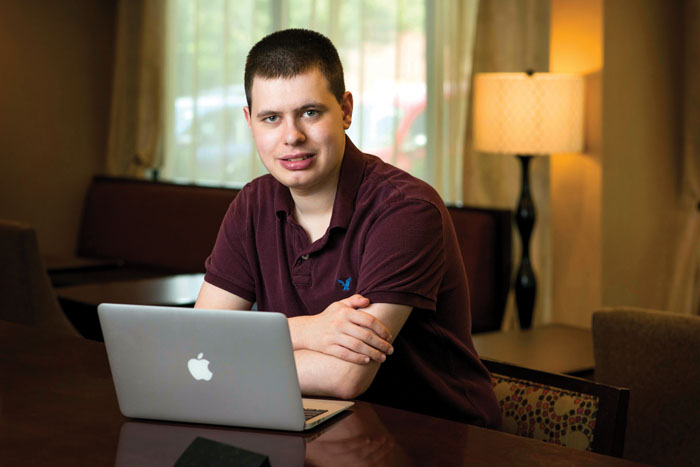 CHINA GROVE — Carson High School has been good to Jacob Osterweil. Now a senior, Jacob said he struggled at previous schools due to a combination of autism and ADHD. Often, he said, he’s easily mistaken for someone who has special needs.

Jacob was non-verbal until he was 3 years old, and said he often had meltdowns as a child. In elementary school, he worked one-on-one with a teacher who helped him get through school. But in middle school, he said, that one-on-one connection wasn’t possible. And then he began to get bullied.

He spent the rest of middle school as a homeschool student, but decided to return to public school for high school. And at Carson, he’s excelled.

A teacher there, David Hord, was the first person Jacob said he felt he could trust.

“He’s always been there for me,” he said.

Jacob had other good teachers, and he can list them off by name — people who have pushed him, connected with him and helped him come out of his shell.

“We all love Jacob so much. … He’s really flourished here,” Ashlinn Trexler, a guidance counselor at Carson, said.

Jacob studied library history for his senior project, but said his true passion is video games. They’ve helped and inspired him throughout his life, and his goal is to work in video game design.

“I want to make kids happy when they play something,” he said.

His big dream, however, is to design an interface that would let the elderly or those with physical disabilities play motion or active video games. He said he envisions it as a full-body apparatus — like the Iron Man suit.

But for now, he’s looking forward to graduating.

“It feels great, to be honest,” he said about earning his diploma.

“School’s been like a second home to me,” he said.

After graduating, he plans to attend the S.O.A.R. program at Rowan-Cabarrus Community College. If he does well there, he said, he’ll take computer programming classes and work towards realizing his dream.