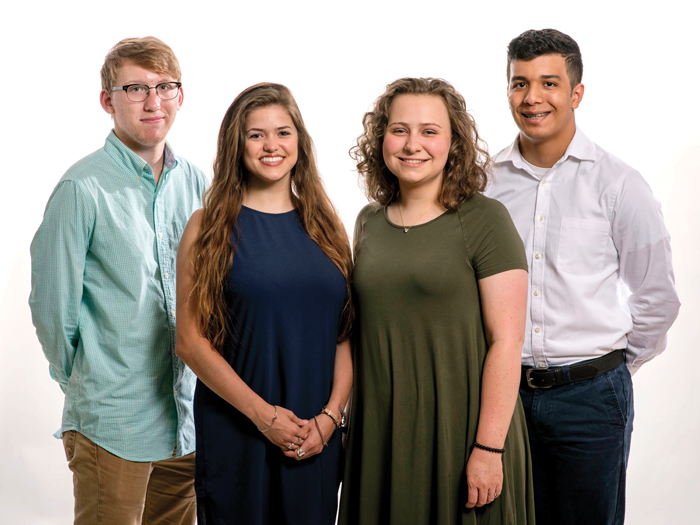 James Paul Barringer IV, of Salisbury, is the son of Christine and Jim Barringer. Before Carson he attended Bostian Elementary and China Grove Middle schools. He plans to attend Duke University, but is undecided on a major and a career path. He studied the pathology of HIV and AIDS for his senior project.

While attending Carson he participated in cross country, indoor and outdoor track, wrestling, the National Honors Society, National Technical Honors Society and the school leadership team. He is also a member of the Crosby Scholars, and he earned his Eagle Scout.
A defining moment in his life: Attending Governor’s School the summer of 2016.
The secret to his high school success: Hard work and a passion for learning.
If he had a $10 million: I would donate it to cancer and AIDS research because these diseases continue to plague not just America, but the world as a whole.

Adrian Vergara is the son of Arturo and Maria Vergara. He attended Woodleaf Elementary and West Middle schools. He will attend North Carolina State University, and he plans to major in computer engineering. His career goal is to work for IBM. For his senior project, he studied veterinary medicine.

During his time at Carson High, he was on the wrestling team and the swim team. He was a member of the National Honor Society. He also coached YMCS soccer for two seasons and he volunteers at his church.
A defining moment in his life: When I met my future wife, Elizabeth Yousey.
The secret to his high school success: If you can believe, you can Achieve 3000.
If he had $10 million: I would give out 10 small loans of $1 million dollars.

Morgan Elizabeth Warren, of Salisbury, is the daughter of Harry and Catherine Warren. She attended Salisbury Academy for her elementary and middle school education. She plans to attend Tisch School of the Arts at New York University where she will major in theater. For her senior project, she studied the technological advancements of the piano throughout history.

Warren served as the Student Body treasurer, Junior Class president and as an officer board member of the Drama Club. She was also elected president of her ninth, 10th and 11th grade Crosby Scholars classes. She has been involved in Orange and Blue Crew, Key Club, Interact Club, Drama Club, the International Thespian Society, Prom Committee and National Honor Society. In addition, she has participated in both local and overseas mission trips.

A defining moment in her life: the moment I was holding my acceptance letters from both the University of Southern California and New York University, and choosing in which direction (literally) my life would be going.

The secret to her high school success: Take the courses that seem unnecessarily difficult, learn how to balance academics and extracurricular activities, and always think two steps ahead — after all, high school doesn’t last forever.

If she had $10 million dollars: I would pay the college tuition that has been staring me down ever since I put down my freshman housing deposit; with the leftover funds, I would make an extensive trip around the world and purchase a fair amount of property.

Elizabeth Nicole Yousey, of Salisbury, is the daughter of Karen and Greg Yousey. She previously attended Faith Elementary and Southeast Middle schools. She plans to attend the University of North Carolina at Wilmington, and hopes to pursue a career where she can work with children and help others. For her senior project Elizabeth studied school guidance counseling. She created an infographic showing areas where  students feel they need more support. She collected from Carson students and presented the infographic to counselors to help them create a plan for next year.

While at Carson she participated in marching band, was senior class president of Carson’s Crosby Scholars program, a member of the National Honor society Board and an active member of Carson’s leadership team. She has also volunteered with Faith Elementary’s Battle of the Books program and served as the director of her church’s vacation Bible school program.

A defining moment in her life: A defining moment in my life was my junior year when I had two phenomenal teachers in my AP English and my AP Calculus classes, Ms. Barrett and Ms. Pittman. They pushed me to grow in my academic ability and by dedication to my work.

Her secret to high school success: Dedication and hard work.

If she had a 10 million: I would donate a large portion to charities that focus on underprivileged kids and have a strong focus toward education. With the remaining money I would take my family on a wonderful, long trip to Disney World.