GRADUATION 2017: Cancer was not an obstacle 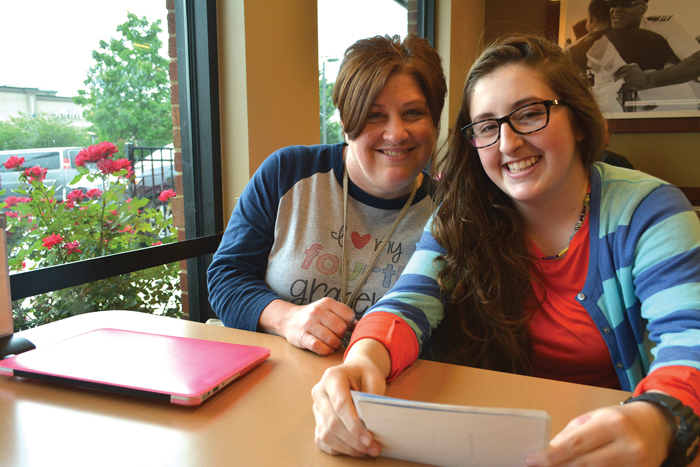 Susan Shinn Turner/For the Salisbury Post Lynda Hunter and her daughter, Cierra, look over photos from Cierra’s Make-A-Wish experience in 2007. A cancer survivor, Cierra is preparing to graduate from South Rowan High School.

LANDIS — At the end of every fairy tale, the beautiful princess always lives happily ever after. That’s exactly what happened with Cierra Hunter.

In 2007, Cierra was diagnosed with Hodgkin’s lymphoma. She took chemotherapy during second grade, and that spring was granted a Make-a-Wish trip with her family to Disney World.

Her fabulous fairy godmother, Glenna Wilson, came to Millbridge Elementary to inform Cierra that her wish had been granted. Glenna placed a tiara on Cierra’s head. Her hair had just begun to grow back after chemo. Under a bright blue sky, the whole school came out to see her off. Cierra and her parents, Lynda and Brad, and brother Riley, then a first-grader — took a few turns around the parking lot in a horse-drawn carriage.

Sitting in a local restaurant with her mom, Cierra laughs at the memory. Her brown eyes still sparkle, and her long, brown hair now cascades down her shoulders. She went into remission that year of second grade, went to Disney, and went on with her life.

Other than a yearly visit to the oncologist and coping with some psoriasis, life has been pretty normal, Cierra says. “Cancer is not like anything that hangs over me.”

She always walks the survivors lap at Relay for Life, and once she became a student at South Rowan High School, she received a white rose from her peers, which she says was pretty cool.

Cierra’s dad is also a cancer survivor. On the day of her remission party in 2007, he got a call that he had melanoma — so he’s also a 10-year survivor.

Cierra is excited about her upcoming graduation from South: June 10 at 8 a.m. — “bright and early!” — which suits her fine.

This fall, she’s headed to Montreat College to pursue a degree in outdoor education. She loves backpacking and hiking — she and Riley took their mom on a hiking trip for Mother’s Day — and she’s loved her science classes in school.

“I’m excited to be a part of a small school, and I just love the mountains,” Cierra says.

Cierra, who’s played tennis since seventh grade, has earned a tennis scholarship to Montreat. She received a 16-page packet for the summer workout program and said she was nervous about getting started.

Her mom, of course, is proud. She, too, doesn’t think much about Cierra’s cancer.

“I really feel like the experience of the cancer has made her who she is,” Lynda says. “She’s very confident. She’s very much her own person — she’s had to be.”

At South, Cierra recently received an award in Outstanding Christian Leadership from Youth Commission International (YCI), as well as the Kindness Award — given by her peers.

“I appreciated that a lot,” Cierra says.

“Her relationship with Christ is so strong,” Lynda says. “I remember when she was diagnosed, she asked me, ‘Momma, why are you crying? God’s got this.’ This was a second-grader.”

Cierra has done well in school. She’s in the top 10 of her class. She’s looking forward to decorating her dorm room this fall. Her roommate is Emily Erlien from Charlotte. They met during honors college interviews and hit it off.

Cierra says that being a cancer survivor has helped her to become a leader.

“I’m always the first person to volunteer,” she says. “It wasn’t just about getting sick and getting better. I learned a lot and could share my knowledge. I just want to help people. I have a whole different level of trust in God.”