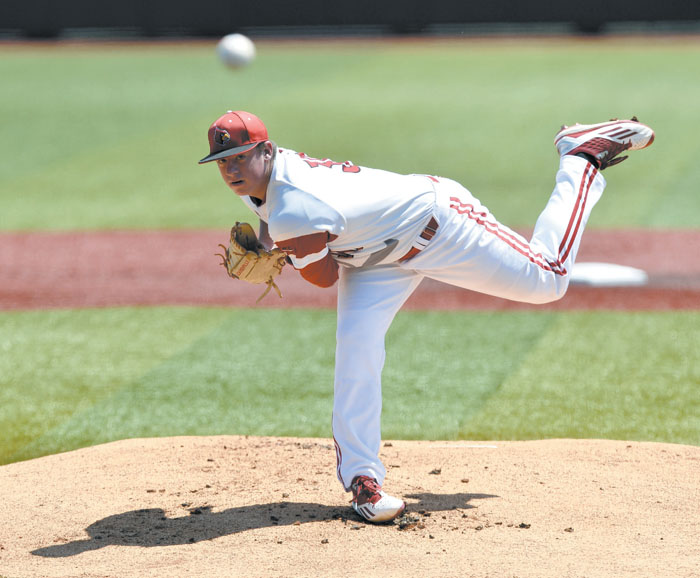 OMAHA, Neb. (AP) — Super regionals are the next stop on the road to Omaha. The eight best-of-three series starting Friday and Saturday will determine the field for the College World Series.

Some things to know:

LET’S DO IT AGAIN

HE CAN DO IT ALL

Oregon State second baseman Nick Madrigal is Pac-12 player of the year and batting .380 with 18 doubles, four homers, 34 RBIs and a team-leading 15 steals on 17 attempts. He’s had a deep bone bruise for almost a month since getting hit by a pitch on his left hand and was just 1 for 8 in the first two games of regionals. So he adjusted. He went 4 for 4 in the final against Yale — and every hit was a bunt single.

Sam Houston State achieved a first by making super regionals . Other milestones for a school that’s been playing baseball since 1906: the 740-mile trip to Florida State is the farthest the Bearkats will have traveled for a game, and the journey to Tallahassee is their program’s first by airplane.

With Cal State Fullerton playing at Long Beach State, the Big West is assured of having a team in the College World Series for a fourth straight season.  It’s the first time two Big West teams have met in super regionals. Long Beach State, the conference champion, was 5-1 against the Titans in the regular season.

HE’D GIVE HIS RIGHT ARM

Davidson senior ace Durin O’Linger got straight-A’s last semester, is a member of Phi Beta Kappa and plans to go to pharmacy school. The super regional at Texas A&M , or the CWS, will be the end of his career. All that makes his pitch count irrelevant the rest of the way. He proved as much in the Atlantic-10 Tournament, when he threw 236 pitches, and last weekend when he threw 128 more while earning a win and save in regional wins over No. 2 national seed North Carolina.

WELL, THIS IS AWKWARD

First-year Mississippi State coach Andy Cannizaro took the Bulldogs’ job in November after serving as hitting coach and recruiting coordinator at rival LSU. He’s returning to the Baton Rouge tiger den for super regionals. LSU swept three games from the Bulldogs in May in Starkville.

LSU freshman Zach Watson hit a tournament-leading four home runs in regionals. He had two against Texas Southern and two more against Southeastern Louisiana. The four homers doubled his season total. Missouri State’s Jeremy Eierman and Vanderbilt’s Will Toffey each have hit three homers in the tournament.

Missouri State can count on Jordan Knutson to start, pitch middle or short relief or even close. The Bears called on him in all four regional games, and the senior left-hander earned two wins and took a loss before throwing 2 1/3 innings of no-hit, shutout relief in the clinching win over Arkansas. Knutson has made a career-high 21 appearances, including 15 starts, and is 8-3.

Wake Forest-Florida offers a contrast of styles. The Demon Deacons have hit 100 home runs and are batting .311, scoring 7.9 runs a game and have five players with 12 or more homers. Florida has among the best starting rotations in the country, with Alex Faedo, Brady Singer and Jackson Kowar combining for 26 wins. Michael Byrne has developed into the top closer with a nation-leading and school-record 16 saves.

Zach Reks took a long, winding road to Kentucky. The senior left fielder from Orland, Illinois, played at Air Force as a freshman in 2013. Unhappy in Colorado, he gave up baseball, transferred to Kentucky to be a regular student and worked two years at Toyota’s manufacturing plant a half-hour away from Lexington. Reks reconnected with an Air Force teammate who transferred to Kentucky, and he started spending time around the team. Reks was invited to walk on, earned a starting job the second week of the 2016 season and batted .331. This season he’s started every game in the outfield, batted .360 and driven in 44 runs.